Activist released after more than three years in jail for sedition 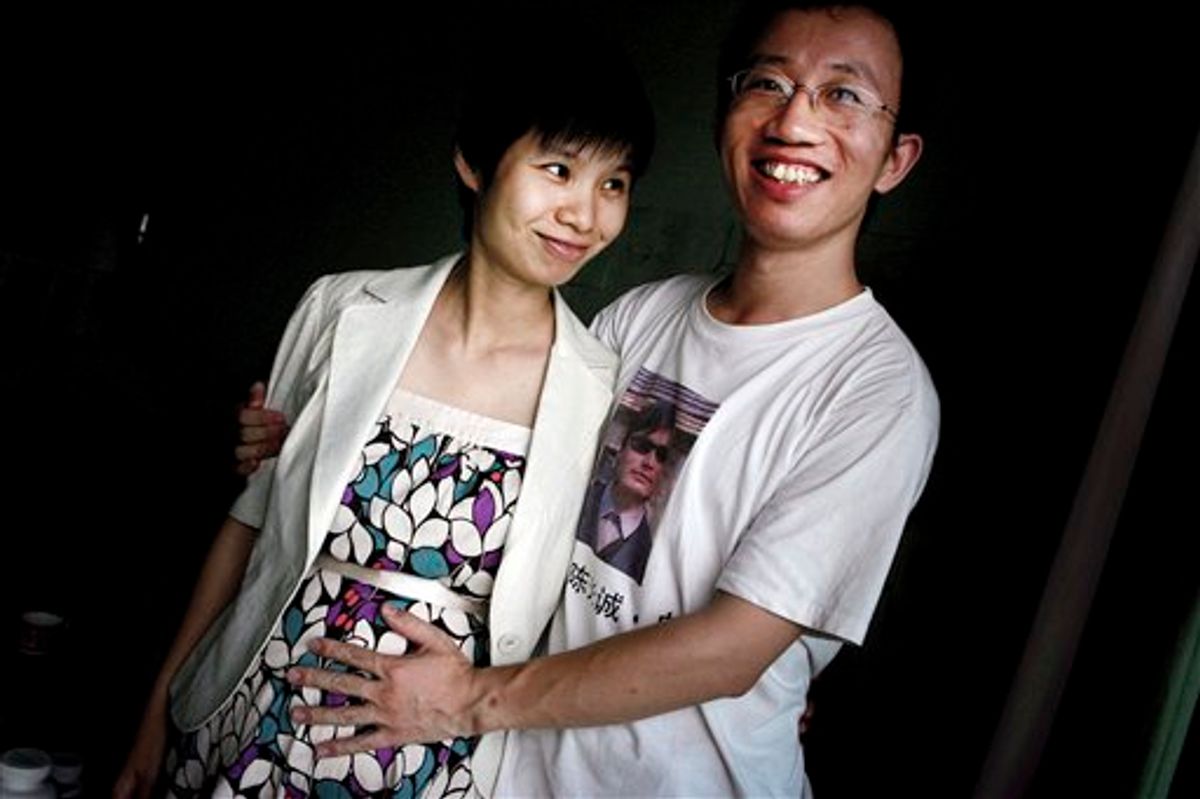 FILE - In this July 6, 2007 file photo, Hu Jia, right, and Zeng Jinyan, husband-and-wife activists, pose for a picture at their home in Beijing. Zeng said she visited Hu, who was jailed for sedition more than three years ago, in prison June 20, 2011. Jia was released Sunday, his wife said. (AP Photo/Elizabeth Dalziel, File) (AP)
--

A prominent Chinese political activist imprisoned for sedition was released Sunday at the end of his more than three-year sentence, his wife said, though his freedom could be limited by continued surveillance.

A major figure in China's dissident community, Hu Jia advocated a broad range of civil liberties before he was imprisoned in 2008. His 3 1/2-year prison sentence was set to end Sunday.

He returned home before dawn, Hu's wife Zeng Jinyan said in an online message. "Safe, very happy. Needs to recuperate for a period of time," Zeng said in a Twitter message.

No one answered Zeng's phones on Sunday, but she had said earlier she would announce his release on Twitter. She had visited him on Monday at the Beijing Municipal Prison.

Hu, 37, is known for his activism with AIDS patients and orphans. The sedition charge stems from police accusations that he planned to work with foreigners to disturb the 2008 Beijing Olympic Games.

Hu's release comes amid one of the Chinese government's broadest campaigns of repression in years as Beijing has moved to prevent the growth of an Arab-style protest movement.

Like other dissidents released recently from jail, Hu might be kept under some sort of continued detention in his home, although such restrictions are illegal in China.

Hu's release comes several days after outspoken Chinese artist Ai Weiwei were released after nearly three months in detention. He was one of the most prominent activists detained in China's sweeping crackdown on dissent, which began in February.

In a posting last week, Zeng said that upon his release, Hu, who suffers from a liver ailment, would be deprived of his political rights for one year and will not be able to speak to the media.

"For this one year, the focus should be on treating his cirrhosis, caring for parents and child, to avoid being arrested again," she wrote.

In late 2008, Hu won the European Parliament's top human rights award, the 50,000-euro ($72,000) Sakharov Prize. Hu was honored in Strasbourg, France, where because he was in prison, his name was placed in front of an empty seat.

Initially an advocate for the rights of HIV/AIDS patients, Hu expanded his efforts after the government gave little ground and he began to see the country's problems as rooted in authorities' lack of respect for human rights.

Hu used the Internet and telephone to chronicle the harassment and arrests of other dissidents and also published a series of articles criticizing the authorities for using the Olympics to mask serious human rights abuses.

In recent months, hundreds of lawyers, activists and other intellectuals have been questioned, detained, confined to their homes or simply disappeared in the wake of online appeals calling for peaceful protests across the country similar to those in the Arab world. Though no protests took place, the calls spooked the Chinese government into launching the clampdown.

There are concerns that extra-judicial tactics will be used against Hu, including illegally detaining him, said Human Rights Watch senior Asia researcher Nicholas Bequelin.

"Of course we are happy to have him be released, the problem is that we are not sure he is going to be released to freedom, but rather that he is going be again under some form of limitations to freedom, such as house arrest or monitoring and harassment by the authorities," Bequelin said before Hu's release.

Another activist, Chen Guangcheng, and his wife have been kept under an unofficial house arrest in their village in eastern China since he was released from jail last fall, and reporters trying to visit them have been kept away by thugs who patrol the village.

Chen angered authorities after documenting forced late-term abortions and sterilizations and other abuses in his rural community, but was sentenced for instigating an attack on government offices and organizing a group of people to disrupt traffic, charges his supporters say were fabricated.