Opposition to meet in Syria after bloody weekend 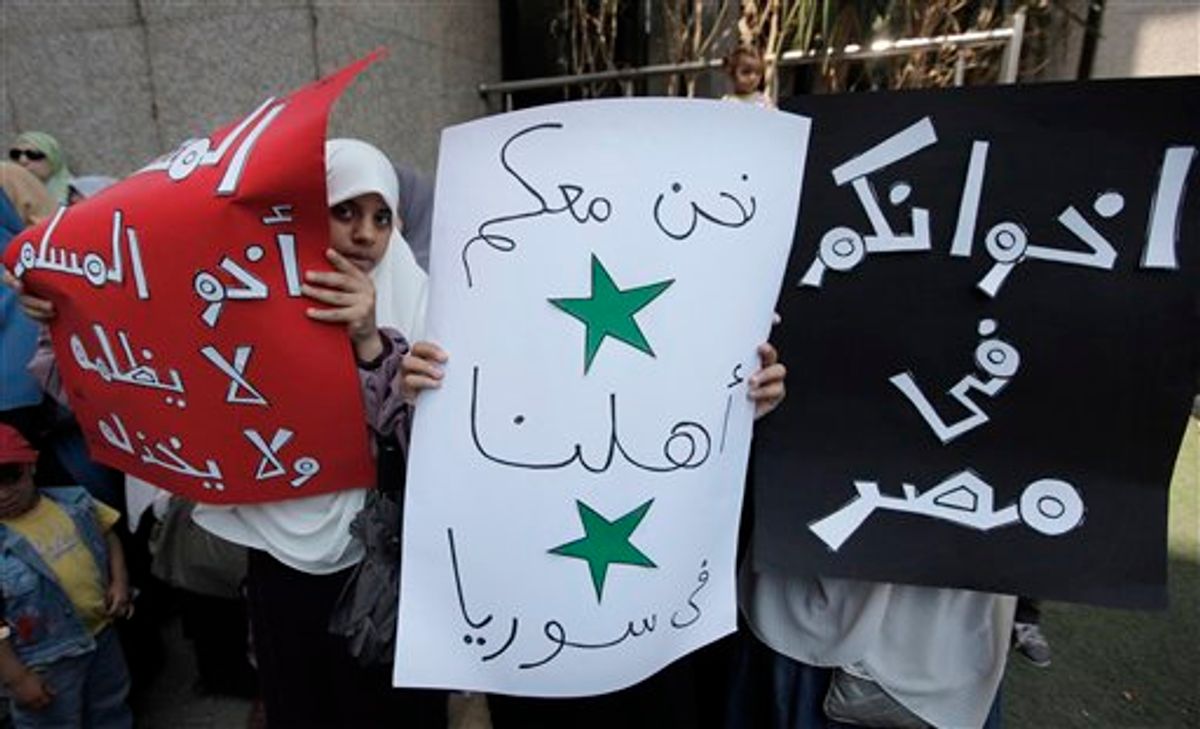 Three months into Syria's bloody political showdown, some 200 critics of President Bashar Assad's regime prepared to convene in an unprecedented opposition gathering Monday in Damascus, after another deadly weekend for anti-government protesters.

Activists reported Sunday that Syrian forces opened fire when funerals for slain demonstrators in a Damascus suburb turned into protests on Saturday. Two people were killed, said Rami Abdul-Rahman, the London-based director of the Syrian Observatory for Human Rights.

He said one person was also killed in Damascus' Barzeh neighborhood during protests, and two were killed in the village of al-Quseir, near the Lebanese border. This followed what activists said were the killings of 20 people during demonstrations Friday across Syria, including two children aged 12 and 13.

Monday's planned meeting among scores of Syria-based opposition figures and intellectuals, the first such inside Syria during the current upheaval, is meant to discuss strategies for a peaceful transition to democracy, said Louay Hussein, a prominent Syrian writer and dissident. They'll meet under the slogan, "All for Syria within a civil and democratic state."

He said Syrian authorities were informed of the meeting and had not blocked it. There would be no government representation, he said.

Another participant, well-known Syrian writer Michel Kilo, who spent years in Syrian prisons for his criticism of the regime, said those meeting Monday have "their own choices and positions" for ways of moving Syria to democracy. He said no one from outside the country had been invited, and participants belong to no political faction.

Whether such a group might produce partners for President Assad's proposed "national dialogue" remains to be seen.

In a nationally televised speech June 20, Assad said he was forming a committee to study constitutional amendments, including one that would open the way to political parties other than the ruling Baath Party. He said a package of reforms was expected by September or no later than the end of the year.

Two days later, his foreign minister, Walid Moallem, called for regime opponents to enter into political talks. "Whoever wants to test our seriousness should come to the national dialogue to be a partner in shaping the future," he said.

Some prominent dissidents rejected such overtures, however, citing what they said was previous Assad talk of reform that produced no political change.

The opposition says some 1,400 people have been killed -- most of them unarmed protesters -- during the government crackdown on months of street protests.

The regime disputes that figure, however, and says security forces have been the victims of "armed thugs" and foreign conspirators it says are behind the unrest. Syria's military spokesman, Maj. Gen. Riad Haddad, told The Associated Press on Sunday that 300 soldiers and 47 police officers have been killed.

His statement, like the reports by anti-regime activists, could not be independently verified, since Damascus has banned most foreign reporters from Syria and put restrictions on local journalists' reporting.

The unrest has sent thousands of Syrians fleeing into neighboring Turkey and Lebanon. As of Sunday morning, more than 11,450 Syrian refugees were sheltered in Turkey, officials there said. Hundreds, some with gunshot wounds, crossed into Lebanon late last week.

Assad has come under growing international condemnation and sanctions, including from U.S. Sen. John McCain in Cairo on Sunday.

Calling Assad a "butcher," the Arizona Republican said, "It's time to call out Bashar Assad for what he is, and call for him to step down from power, or be removed from power by the people." But McCain emphasized that he was not advocating U.S. military intervention.