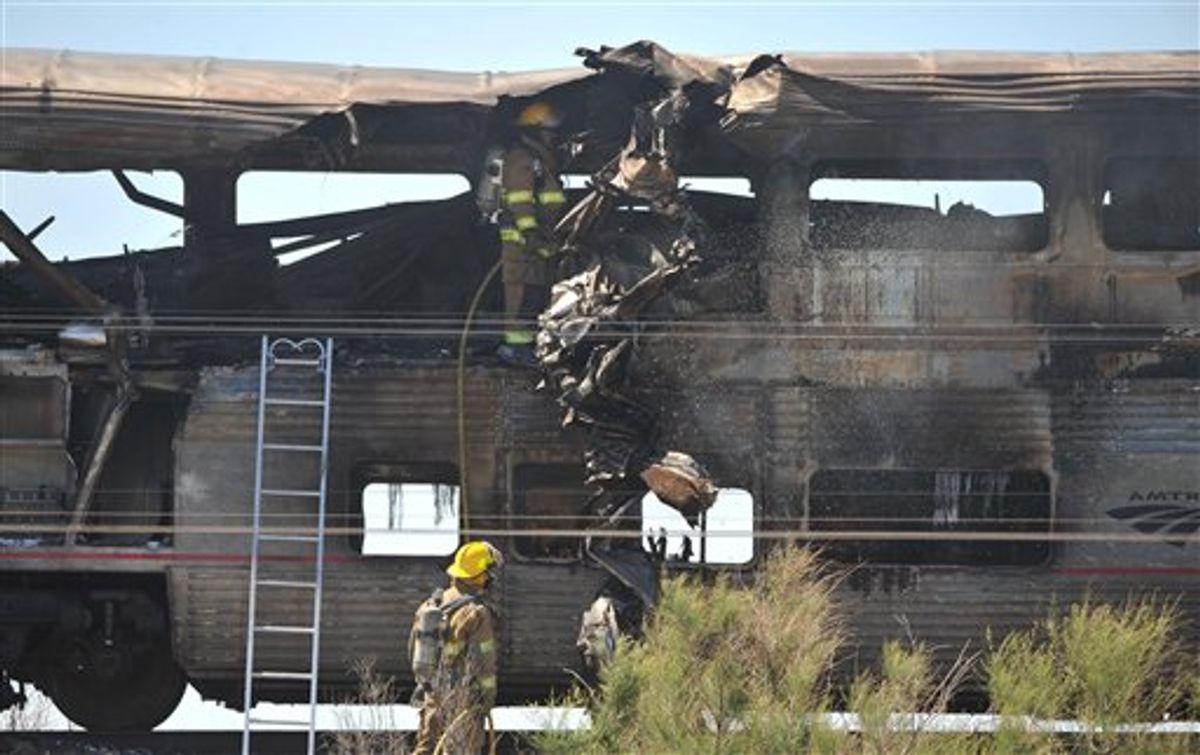 Firefighters put water on the wreckage of an Amtrak passenger car Friday June 24, 2011 near US 95 north of Fallon, Nev. The west-bound train was struck by a semi-truck and burst into flames. The driver and a passenger of the truck were killed. Injured train passengers were taken to local hospitals but officials must let the wreck cool off before they continue their search. (AP Photo/Liz Margerum - reno Gazette Journal) (AP)
--

A truck driver tried to stop his big rig before it slammed into the side of an Amtrak passenger car in the Nevada desert, killing him and at least five other people on the train and injuring about 20 others in the fiery crash, authorities said Saturday.

The Churchill County Sheriff's office said in a release late Saturday that officials were working to confirm the victim's identities and notify family members. Meanwhile, United Transportation Union said on its website that conductor Laurette Lee, 68, of South Lake Tahoe, Calif., was one of the victims.

More than two dozen other people were still unaccounted for, but Earl Weener of the National Transportation Safety Board called the figure "spongy" because some passengers may have gotten off the train before the crash or walked away from the scene without checking in with officials.

"This is not quite like you are used to when you get on an airplane. They record exactly who gets on, and what seat they sit in," he said. "On a train you can get off without necessarily being tracked."

He said he expected the number to decrease as the investigation continued.

Amtrak's California Zephyr was en route from Chicago to Emeryville, Calif., with some 200 passengers and 14 crew members when the accident happened late Friday morning about 300 miles east of its destination.

The semitrailer, which the NTSB said was owned by John Davis Trucking in Battle Mountain, plowed into the train about 70 miles east of Reno, sparking a fire that gutted two Amtrak cars and caused damages that hampered investigation efforts into Saturday, Nevada Highway Patrol Trooper Dan Lopez said.

NTSB spokeswoman Vernae Graham told the Reno Gazette-Journal that the train's second car, which is a dorm car for employees, and the third car, which was the first coach, had burst into flames.

"The fire weakened the structure of the cars and they could collapse," Lopez told The Associated Press earlier Saturday. "The safety of workers is a big thing, and we don't want to put someone else in an unsafe situation."

Lopez also said investigators at the scene about 70 miles east of Reno found skid marks at the railroad crossing on U.S. 95, indicating the driver tried to stop his semitrailer before Friday's crash,

About 20 people were injured and able to escape.

Sixteen National Transportation Safety Board investigators took over at the scene Saturday and are expected to take up to a year to pinpoint the cause of the crash.

Lopez said the investigation would focus on the truck driver, whose rig crashed through a crossing gate before plowing into the Amtrak car. A witness told authorities that the crossing gates and warning signals were working at the time.

"That's what everybody wants to know. Why did the truck collide with the train?" Lopez said. "Unfortunately, since he was pronounced dead, he's the only one who can tell us that prior to the investigation."

Following medical evaluations or treatment, most passengers continued their travel west on chartered buses or chose to make their own arrangements, Amtrak said in a news release.

Eugene Rheault of Manchester, N.H., was on a trip from Yellowstone National Park to San Francisco when the accident occurred.

"My wife and I were playing cards in the observation deck when there was a big bang and an explosion and an unbelievable amount of fire went by the window," Rheault told the Reno Gazette-Journal. "It scared the living daylights out of me."

Alex Graham, 18, of Fort Wayne, Ind., was reading a book while on a trip to the West Coast with his mother when the Amtrak was hit.

"And then a wall of fire went by the window," he said. "I could feel the heat instantly."

Passengers have provided conflicting accounts of which car was hit, ranging from the second to fourth car.

The collision was on a portion of tracks that cross U.S. 95 about three miles south of Interstate 80.

The driver was the only occupant of the semi, which was hauling two empty gravel trailers.