One member of the state's high bench accuses another of assault 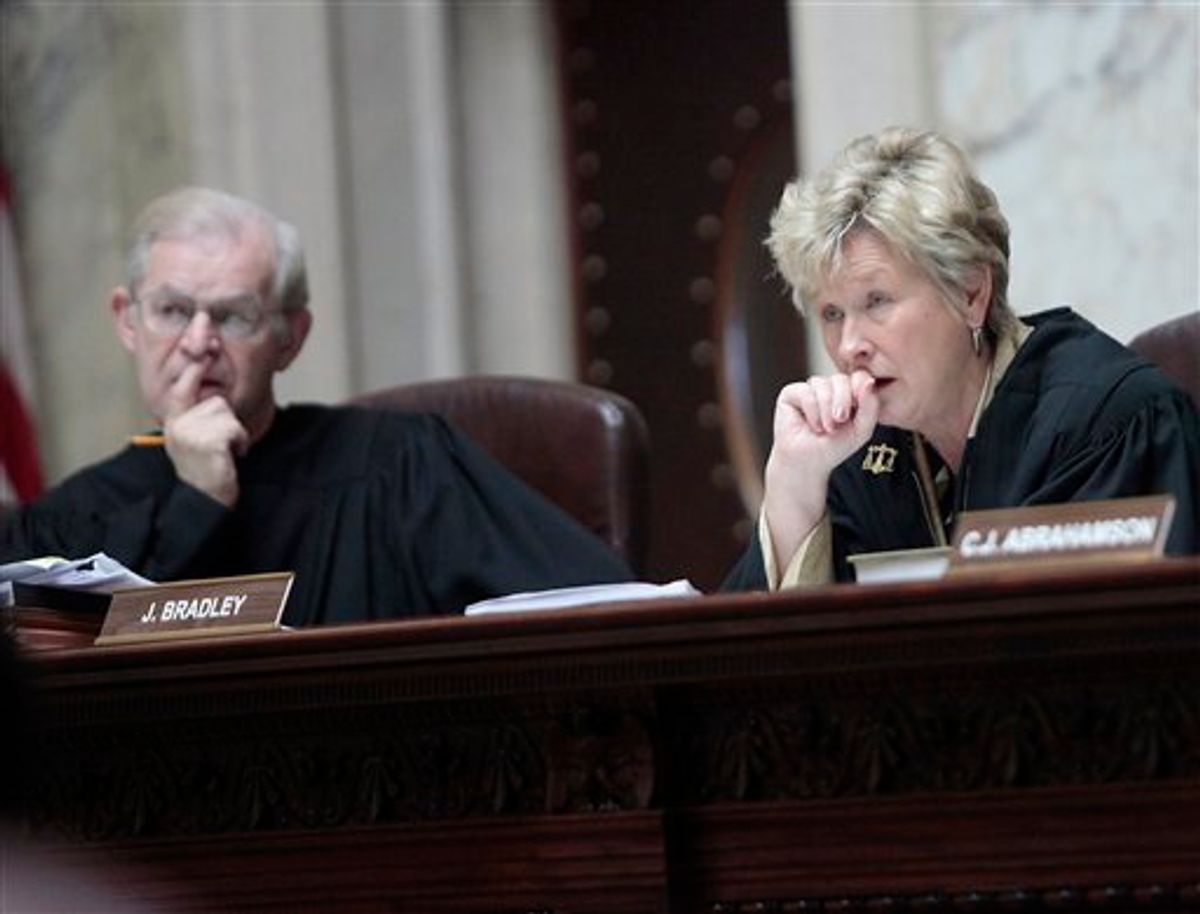 Wisconsin Supreme Court Justices David T. Prosser, Jr. and Ann Walsh Bradley consider oral arguments during a hearing regarding the state's budget bill at the Wisconsin State Capitol, Monday, June 6, 2011. According to a report by Wisconsin Public Radio and the Wisconsin Center for Investigative Journalism, Prosser allegedly grabbed Bradley by the neck with both hands during an argument in Walsh's chambers prior to the court's decision to uphold the bill. (AP Photo/John Hart, Pool) (AP)
--

A member of the Wisconsin Supreme Court's liberal faction has accused a conservative justice of choking her during an argument in her office earlier this month -- a charge he denied.

Supreme Court Justice Ann Walsh Bradley told the Milwaukee Journal Sentinel that Justice David Prosser put her in a chokehold during the dispute. She contacted the newspaper late Saturday after Prosser denied rumors about the altercation.

"The facts are that I was demanding that he get out of my office and he put his hands around my neck in anger in a chokehold," Bradley told the newspaper.

A message could not be left at her home listing, and her former campaign manager did not return a call from The Associated Press.

"Once there's a proper review of the matter and the facts surrounding it are made clear, the anonymous claim made to the media will be proven false," he said. "Until then I will refrain from further public comment."

The argument took place June 13, the day before the court, in a 4-3 decision that included a blistering dissent, ruled that Dane County Circuit Judge Maryann Sumi overstepped her authority when she declared the polarizing union law void. While accounts differ, the justices were apparently discussing the decision and its timing.

Leaders in the Republican-controlled Legislature had pushed for a decision by June 14 because they were working on the state budget, and Walker's proposal depended on expected savings from the law. Along with limiting most public employees' bargaining rights, it requires them to pay 12 percent of their health insurance costs and 5.8 percent of their pension costs.

Tens of thousands of people gathered for weeks at the Capitol to protest the proposal after Walker unveiled in February. Once it passed, opponents began to focus on Prosser's re-election campaign in the hope that by replacing him with a liberal justice, they could get the court to overturn the legislation.

Prosser, who had been expected to walk away with the election, found himself in a tight race with liberal challenger JoAnne Kloppenburg. Initial results showed she had defeated Prosser by about 200 votes, and she declared herself the winner the day after the election. Then a county clerk who once worked for Prosser announced she had failed to report 14,000 votes.

A bitter and nearly month-long recount ended with Prosser's re-election. He defeated Kloppenburg by about 7,000 votes.

The recount ended about three weeks before the Supreme Court issued its opinion in the union case. The Milwaukee Journal Sentinal, quoting an anonymous source, said the argument erupted after Chief Justice Shirley Abrahamson said she didn't know whether the opinion would be released in June. Prosser allegedly questioned Abrahamson's leadership, leading Bradley to defend her.

Prosser and Abrahamson, another of the court's liberal minority, had had problems before. Prosser told the newspaper in March that he had used profanity in a meeting the month before and threatened to destroy Abrahamson.

Bradley sent all the justices an email after that meeting, saying Prosser's behavior was unacceptable. She said later that she considered making a report to law enforcement but decided against it.

The Center for Investigative Journalism reported the altercation between Prosser and Bradley had been brought to the attention of the Wisconsin Judicial Commission, which investigates allegations of misconduct involving judges. The commission's executive director, James Alexander, said he couldn't confirm nor deny an incident was under investigation.