As other nations put restrictions on banks, our government caters to Wall Street. It will end up costing us 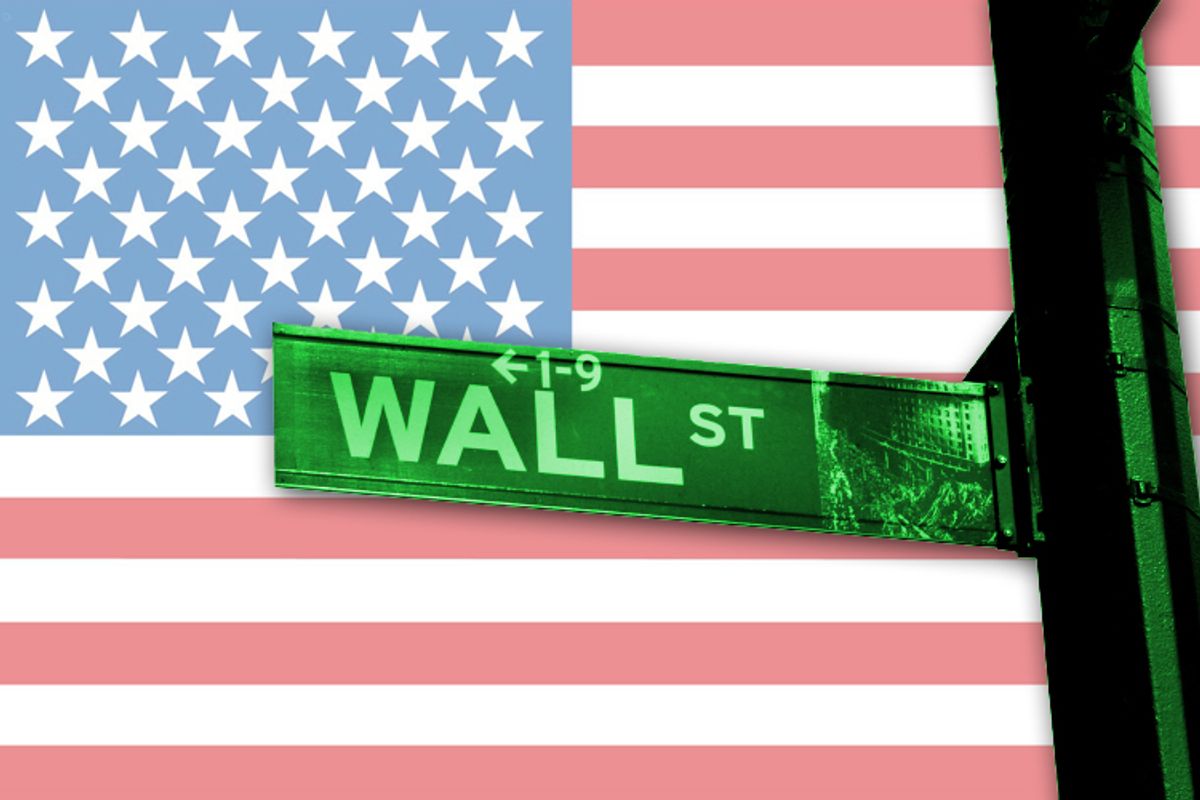 Despite the moment's anti-union/anti-government sloganeering, the American employees who are paid the highest publicly financed salaries are not state and municipal workers -- nor even our $400,000-a-year president. That distinction goes to the bank executives who are now being paid record salaries -- salaries that continue to be financed by ongoing taxpayer-sponsored bailouts (and yes, huge bailouts are still happening).

We don't hear much about this because the United States government still promotes the fallacy that our banks are not publicly subsidized institutions subject to requisite public control like, say, a utility company might be. Instead, despite all evidence to the contrary, Washington pretends that these are corporations operating in a free market, ignoring the fact that an actual free market would have destroyed many of these very same entities back in 2008. Nonetheless, the nonsensical free-market apocrypha lives on because it serves such an important a purpose for banks and the U.S. politicians they own -- namely, to successfully thwart the push not just for full-on bank nationalization, but for even minimal financial regulation.

So astonishingly successful has this farce been that our domestic debate about spending and deficits today is somehow primarily about demonizing the publicly financed five-figure salaries of teachers, police officers and firefighters, rather than about reducing the publicly financed seven- and eight-figure salaries of Wall Streeters. In Fox News parlance, the former are simply tarred and feathered as the takers in an "Entitlement Nation," while the latter are celebrated as the earnest John Galts who are keeping America afloat.

Against the backdrop of international politics, the unchallenged dominance of such a narrative in this country has become the most powerful American exceptionalism of all -- it now literally separates us from most of the rest of the industrialized world. Indeed, while our pro-corporate ruling class tells us to fear the shrugs of Wall Street's supposed Atlases, the same fears are being outright rejected by many other industrialized nations in the post-meltdown years -- even those with relatively conservative governments.

The conservative ruling party in Canada, for example, has taken to Fox News to brag that its tough financial regulations protected its economy and preserved its free market. Likewise, leaders of conservative ruling parties in France and Germany have been among the most outspoken G-20 voices calling for a bank crackdown. And late last week Great Britain, the industrialized nation that most resembles America, saw its politics roiled by a proposal to make every citizen a shareholder in that nation's bailed-out banks.

As the UK Telegraph reports:

More than 46 million people would be handed the shares in Royal Bank of Scotland and Lloyds Banking Group under the "people's bank" plan devised by Nick Clegg, the Deputy Prime Minister... The plans propose that ordinary voters would be able to profit from any increase in the value of their shares once the Treasury has recouped taxpayers' money used for the bail-out... Mr Clegg said that it was "psychologically immensely important" for people to be given a stake in the banks in the wake of the financial crisis. "Their money has been used to the tune of billions and billions and billions to keep the British banking system on a life-support system," he said...

Mr. Clegg said the proposal would create an army of private shareholders that could hold some of the big banks to account, replacing institutional investors who had done too little to curb boardroom excess...Mr Clegg added that, when every citizen became a shareholder in the banks, they would hold a collective veto on controversial issues such as boardroom pay and bonuses.

Importantly, Clegg's proposal seems to have landed right in the ideological center of British politics. On the right, conservative Prime Minister David Cameron "has given his support for the plan to be discussed" in Parliament. On the left, the UK Guardian editorial page criticizes Clegg's proposal as too free-market-ish, arguing instead to use banks in a full-fledged state-directed industrial policy that "lends to strategically important regions and industries that will otherwise be credit-starved."

No doubt, had a U.S. president ever floated anything like Clegg's proposal, or ever uttered anything like his counterparts in Canada, France or Germany, he would be billed as a Marxist plotting an economic Apocalypse. This is, after all, an America where advocating for Ronald Reagan's tax rates gets you labeled a communist and where echoing Defense Secretary Dick Cheney's past warnings about military quagmires gets you billed as a terrorist lover. On banking regulation, it's been the same trajectory. We've now gone so far to the extreme corporatist right that we make the modern age's original economic imperialists in Europe look like bleeding hearts -- and the gap between us and the rest of the world looks like it's about to get even wider.

On one hand, Europe's politics of finance seem to be gradually moving in the direction of Sweden -- that is, in the direction of growth and stability. As the Washington Post reports, that Scandinavian country -- the very kind American Tea Party types write off with "socialist" epithets -- has the kind of economy the U.S. can now "only dream of: growing rapidly, creating jobs and gaining a competitive edge (as) the banks are lending, the housing market booming (and) the budget is balanced." It has accomplished this in part by seriously regulating its banking sector after it collapsed in the 1990s.

By contrast, as Europe appears more Sweden-like in its financial ideology, we're going in the other direction.

After passing an embarrassingly weak financial "reform" bill that primarily cemented the status quo, the U.S. government is now delaying even the most minimal new rules that were included in the legislation. At the same time, Senate Republicans are touting their plans to defund any new financial regulatory agencies; the chairman of the House Financial Services Committee has declared that "Washington and the regulators are there to serve the banks" -- not the other way around; and the Obama administration is now trying to force potential economic partners to accept financial deregulation as a consequence of bilateral trade deals.

Meanwhile, the presidential campaign already looks like a contest between two factions of the same financial elite -- a dynamic that threatens to make the 2012 extravaganza a contest to see which party can more aggressively suck up to the banks. Yes, the leading Republican candidate is a private equity guy whose speculative work ended up laying off thousands of Americans, while the New York Times reports that the Democratic president has spent the last few weeks aggressively courting Wall Street executives in hopes that they once again finance his presidential campaign.

Decades from now, when we wonder why we're being out-competed by other industrialized countries, we should not forget this moment -- because it is the moment our "exceptionalism" clearly won, and our economy lost.