Dear "Treme": Why are you in such a hurry?

As Season 2 winds down, HBO's New Orleans drama dazzles with its breadth, but frustrates with its impatient rhythms 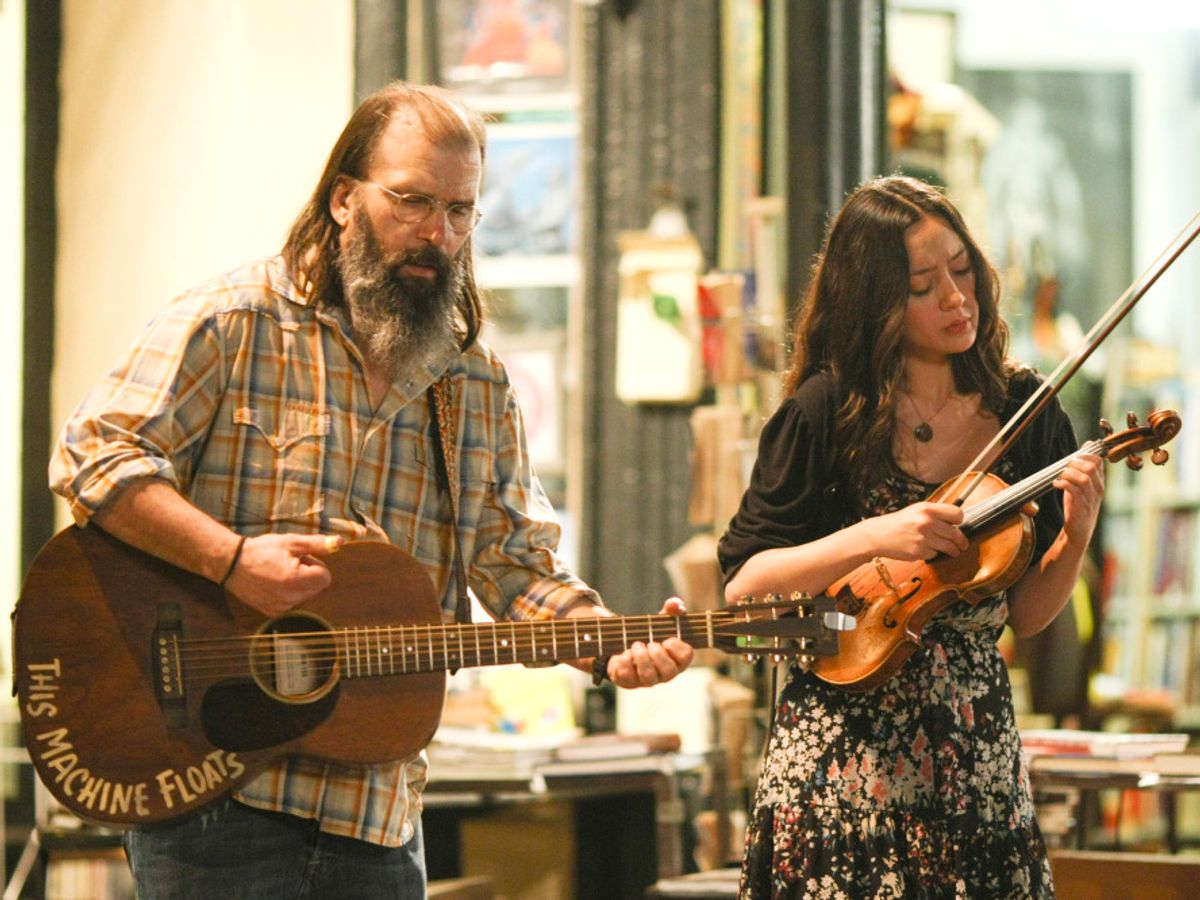 The opening scene of last night's "Treme" showcased the HBO drama at its finest -- and most frustrating. A group of musicians gathered to remember Steve Earle's character, Harley, the street troubadour and mentor to Annie (Lucia Micarelli) who was slain last week after a robbery. As directed by Agnieszka Holland and written by series co-creater Eric Overmyer, the moment was "Treme" at its finest. Like the films of Robert Altman ("Short Cuts") -- a director the "Treme" team often invokes -- it brought major and minor characters together in a gathering to honor an ideal as well as a person. A few characters spoke briefly and tenderly about their late friend and launched into a spontaneous, heartbreaking version of "Will the Circle Be Unbroken." And then came the moment we were waiting for: Poor Annie, who had flowered under Harley's attention, raised her fiddle and started to play.

The episode cut away to the opening credits.

Yes, granted, it's important to keep things moving along. This is a show with a lot of characters and subplots. But would it have killed "Treme" to stick with Annie for another 30 seconds or a minute? Especially considering that the show is supposed to be a celebration of music, and this was a memorial for a slain musician?

Let's back up for a moment and establish a few things:

First, this New Orleans drama by Overmyer and David Simon ("The Wire") is one of the finest things on TV -- so heady and heartfelt that even its worst episode is better than all but a handful of the best episodes of any series on any channel, HBO included. (I've said so in Salon's TV section. More than once or twice, actually.)

Second, "Treme" embraces what we'll call, for lack of a better phrase, a democratic approach to drama, by which I mean it decided in its first season that it was about particular characters -- some of whom were likable and some of whom were not, some of whom were interesting and some of whom were not -- and gave their stories more or less equal screen time from that point forward. It would give certain characters an extra scene or two during certain episodes, more than they might usually get. And it added new characters in Season 2 -- notably Nelson Hidalgo (Jon Seda), the Dallas developer buying property and greasing palms all over the Big Easy -- and killed off others; besides Harley, who caught a bullet for trying to be a surrogate dad to the punk that just robbed him, we've witnessed the suicide of John Goodman's Creighton Burnette, who is still being mourned by his wife, Toni (Melissa Leo), and daughter, Sofia (India Ennenga).

But "Treme" has remained intractably dedicated to the proposition that every character should get a comparable slice of the screen-time pie, regardless of whether they're charismatic and fascinating (most) or shallow and irritating (Nelson still seems like just a megawatt smile attached to a fat wallet; Sonny the guitarist is still basically a drug habit plus long hair plus smug, sullen doucheyness, even though he's gotten clean and gone looking for love).

In case you're wondering, no, I do not want or expect the series to put its ensemble structure on hold every other week and do "bottle" episodes devoted to one or two characters, or "very special episodes" about urgent social issues.  And yes, the timing of the cuts is often great as is --  dramatically apt as well as economical (the two qualities aren't always one and the same). Consider the scene in last night's episode where Antoine's student says that he and his friends want to hone their chops by playing on the street for money and asks Antoine, "Can you help us?" As soon as Antoine looks to his left and grins -- like a little kid checking to see if the coast is clear before he swipes a cookie -- the scene ends. As well it should; there's nothing to add dramatically, nor is there splendid atmosphere to drink in or music to absorb. It's a scene that's all about dialogue and reactions.  One of the greatest scenes in the entire run of the show was the final moment of last night's episode: LaDonna and her husband lying in bed after their first, failed attempt to make love in the aftermath of her rape. The whole thing was done in two shots, rack, focusing between the characters' faces in profile. It lasted about a minute. It was flawless.

But dialogue and reactions isn't all "Treme" is supposed to be about; as established in Season 1, the series is also (theoretically) about the feeling of a great city, the slowpoke rhythms, the vibe of the place and its people. I miss the first season's willingness to linger on a dramatic moment, or a musical moment, and let us bask in it.

I realize that on a David Simon series, the word "linger" is relative; "lingering" for Simon means staying with a character or characters for longer than a minute without cutting away. That's how "The Wire" worked, and for the most part it worked very well, with even short and choppy scenes boasting an egg-like perfection. But remember, "The Wire" had a forward-driving plot to sustain each season and an assortment of specific goals that characters were trying to reach, that lent seemingly sprawling, disparate, season-long stories a sense of unity and coherence. Bear in mind also that "Treme" didn't always do the cut-cut-cut thing. In Season 1, it did linger -- or, if you prefer, "linger" -- more often than it does now, especially during musical sequences.

This year we've almost never gotten to see a musical number play out from start to finish. More often "Treme" gives us just the end of a song, or shows the start of a song and then cuts away to another location and gives us, say, 20 or 30 seconds of some other musical performer, or 45 seconds to a minute of dialogue between some other characters in a separate location, then cuts back to the original number just as it's finishing up.

When a musical scene is just OK, not spectacular, the reflexive cutaways do no damage, and probably help the show. But the cut away from Annie was deeply frustrating and (I believe) counterproductive. And cutting away from Dr. John in mid-performance -- as "Treme" has done this year -- strikes me as sacrilegious. You might as well cut away from an atom bomb exploding before the mushroom cloud takes shape! What other dramatic business on the show is so incredibly important that it can't be truncated or put on hold until next week so that we can hear another 60 seconds from one of New Orleans' greatest live performers, and now a major "Treme" character with lines, bona fide relationships with other characters, the whole nine yards? Is this series about the creative spirit and creative performance, or isn't it? And does it really think that all of its characters are not just equal as (fictional) people, but equally interesting to the viewer, and equally worthy of the close scrutiny that is the privilege and purpose of drama?

My friend Ed Copeland is even more vexed by this tendency than I am. He has spent whole sections of his "Treme" articles clocking individual scenes and listing their running times and contents, including cutaways. He blames exorbitant music licensing fees. But I don't think that's the culprit. "Treme" hopscotches from moment to moment and beat to beat no matter what's happening on-screen, often for no discernible reason other than apparent fear that viewers might get bored and switch channels. It seems to be an aesthetic choice -- one that "Treme" made between seasons 1 and 2 and decided to stick with no matter what, and apply to musical and nonmusical scenes alike.

Believe me, I recognize that "Treme" is a terrific show, and I do appreciate it. But I also think that any momentum it gains by fracturing its scenes and subplots is counteracted by its lurching, at times ungainly rhythm. And I think "Treme" could stand to avail itself of the greatest creative freedom afforded to series storytelling -- the freedom to be elastic in its attentions and linger. Doing so wouldn't make it any less special.

It's New Orleans. What's the hurry?

[UPDATE 6/27/11, 11:34 PST: An earlier version of this piece mistakenly said that Dr. John's character had been given a fictional name. He is actually being addressed by his given first name, "Mac"(Rebennack). ]