Updated: She can -- and will -- say whatever she wants without worrying about the consequences 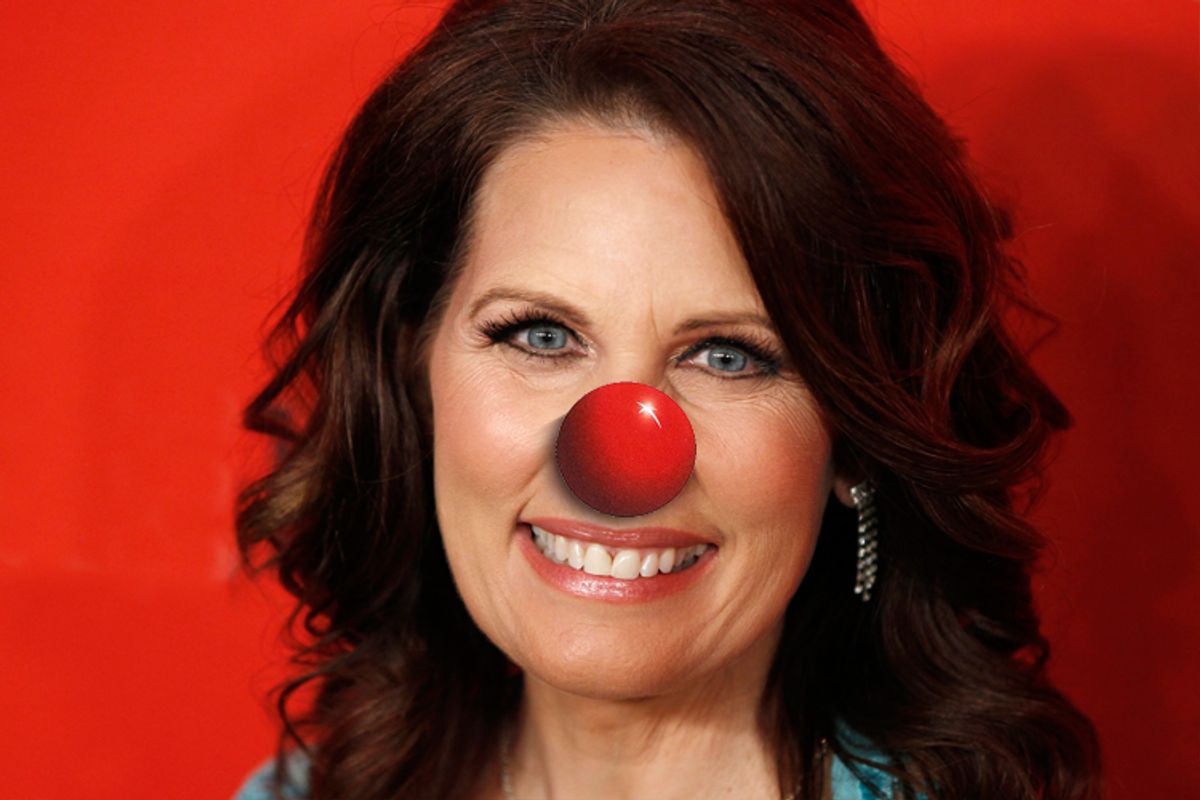 [UPDATED BELOW] We had fun with her Waterloo, Iowa, "gaffe" yesterday, but by Michele Bachmann's standards it actually wasn't that bad. (The illuminating part of her statement was that she wants to live in "John Wayne's America." That's not far from being a white supremacist dog whistle.) But a whole day of nonstop coverage of how dumb and silly Michele Bachmann is is actually pretty much great news for Michele Bachmann. She feeds on this!

She can say the media seized on a simple mistake, distorted her words, messed up the story they were "correcting" her on (John Wayne Gacy was born in Chicago, not Waterloo, Iowa, as various outlets initially reported), and she'd be pretty much right about all of it. And right or wrong, a conservative base that already hates the lamestream media will grow fonder of her the more the press highlights her loopy extremism.

Michele Bachmann is, at this point, incapable of making a true mistake. Short of admitting to being a secret Satanist or revealing that she killed her 23 foster children in order to emulate her hero, John Wayne Gacy, there's nothing she can say that will harm her political career. She's already got a history of inflammatory and untrue statements, and bizarre behavior, and fringe beliefs, and all the press can do is simply throw up its hands and say "she's more serious than you think!" (The liberal press just endlessly repeats the tales of her insanity in the hopes that people will eventually stop telling us that she's more serious than we think.)

Bachmann actually got Chris Wallace to apologize to her, for asking what Conor Freidersdorf correctly labels a softball question. ("Are you a [bad thing]?" is the softest softball in the world, even if it carries a tinge of insult.) Think about that: Have you ever heard of Chris Wallace apologizing to anyone he interviewed before? He is a smarmy jerk to everyone he talks to. (Did Wallace ever apologize to Bill Clinton for blaming him for 9/11?)

In a post-Palin world, conservative candidates no longer need to convince anyone that they're sane or rational or intelligent. There's just no point to it. Tim Pawlenty is "serious," and look how well that's working out for him.

Bachmann could announce a "final solution" for gays and promise to build an ark to house two of every American animal should be be elected and the ensuing press pile-on would just make her an even stronger bet to win Iowa. She could raise a fortune by saying something racist. Once you make the psycho neo-Bircher thing work for you, there's no longer any downside to sounding like a psycho neo-Bircher.

(I mean, she's obviously totally unelectable, but she'll quit the 2012 race next June and win against some nobody challenger in her safe Republican district. Unless she's Romney's V.P. pick!) (I'm still hoping Romney picks Cain, though.)

UPDATE: Bachmann attempted to prove my point this morning, defending her past statement about America's founders having "worked tirelessly" to end slavery by invoking John Quincy Adams, the son of a founder, as proof of her historical literacy.

Contrary to most reports, Bachmann is not "mistaking" John Quincy Adams for a founder. As Michelle Goldberg explained earlier this month, John Eidsmoe, one of Bachmann's right-wing spiritual mentors, has written that the Founders intended to end the institution of slavery. Bachmann was his research assistant on a book he wrote about how the nation was founded as a Christian theocracy. She's not messing up history, she's just sharing her (insane) alternate version of history.

"The question of whether J.Q. Adams should be considered a 'founding father' is something of a hair-splitter," Commentary says in a partial defense of Bachmann. Again: Nothing she can say will hurt her.