Did dismantling public broadcasting in New Jersey also help the governor pay back an unlikely friend? 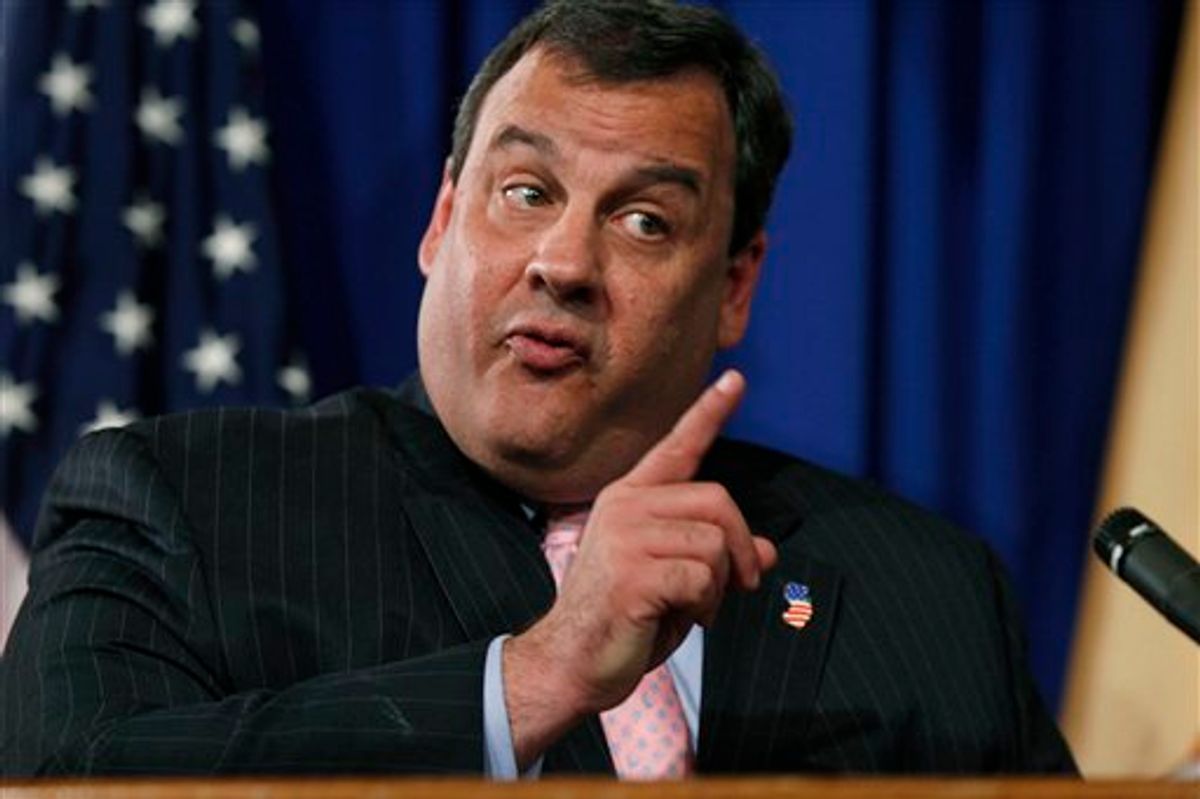 When the Democratic-controlled New Jersey state Legislature approved Chris Christie's plan to radically reduce benefits and bargaining rights for public employees last week, we pointed out that all of the Democratic "yes" votes could be tied to Democratic bosses with whom Christie began cultivating alliances years ago. Democratic legislators with links to these bosses all supported Christie's plan; every other Democrat in Trenton didn't.

Monday night brought a vivid example of what such loyalty to the governor can translate into for these bosses.

In a late-night session, the state Senate fell one vote short of blocking Christie's plan to sell the state's public television station -- NJN -- to New York's WNET. That was the transaction's final hurdle, and NJN's entire staff is now set to be pink-slipped.

You're probably asking: What does this have to do with Democratic bosses? The answer is this: As part of the deal, WNET will contract with a New Jersey-based production company to fulfill its obligation to provide New Jersey-based programming. And who owns the company that WNET will contract with? A man named Steve Adubato Jr. -- who just so happens to be the son of Steve Adubato Sr. ("Big Steve," to the New Jersey political world), who just so happens to the same Newark Democratic boss who has been extremely helpful to Christie.

Big Steve's power has traditionally been based in Newark's North Ward, where he oversees a network of educational and social service operations, all of which serve to fortify his own power. But his clout extends far beyond the North Ward. Since 2002, Big Steve's protégé, Joseph DiVincenzo ("Joe D"), has served as the Essex County executive -- a massively important position, given the executive's role in dispensing patronage. Essex County, which takes in Newark and the surrounding cities and towns, is also the single most significant county in statewide Democratic primaries; more votes are produced there than anywhere else.

As we noted last week, it was the legislative allies of Big Steve and Joe D -- including the speaker of the Assembly (who has an $83,000 job as an Essex County administrator -- meaning she works under Joe D) -- who accounted for all of the Democratic "yes" votes from Essex County on the public employee benefits bill. This seemed to be only the latest sign of cooperation between Christie and the Essex powerbrokers. It can probably never be proven, but it's widely believed by insiders from both parties that Big Steve's organization "went to sleep" on Democrat Jon Corzine in the 2009 election, providing a boost to Christie, who won that race by 4 points. And Christie had long been cultivating a relationship with Big Steve; as New Jersey's U.S. attorney, he even attended the boss's annual St. Patrick's Day celebration, where politicians from around the state gather to make jokes and kiss Big Steve's ring.

All of this brings us to Monday night's vote on the future of NJN, which came a few weeks after Christie formally reached agreement with WNET and Adubato Jr.  Concerned legislators, smelling a fishy deal and fearing that WNET would short-change New Jersey viewers (as it did to Long Island viewers when it took over a public station there), had mounted a last-minute effort to block the sale, and the debate mostly broke along partisan lines (although the state's most conservative media voice also decried the looming sale). Last week, the Democratic-controlled Assembly passed a bill that would block the transaction. It moved to the Senate. There seemed to be momentum. And then ... it fell one vote short. A total of four Democrats ended up voting against the effort to block the sale. One of them was Teresa Ruiz -- the same Teresa Ruiz who just so happens to work for Joe D as his deputy chief of staff.

So that does it for NJN. But it's a banner day for Adubato Jr., who was described this way by the (Bergen) Record's Charlie Stile in a recent column:

Adubato — columnist, consultant for corporations, and author of career-betterment books like "You Are the Brand" — has thrived at the intersection of media, politics and corporate power in New Jersey.

To be sure, Adubato Jr., a one-time politician (he served a term in the Assembly from 1983 to 1985) who has long produced and hosted several shows for WNET and Comcast, has steadfastly denied that his father's ties to the governor had anything to do with all of this. And Christie has denied ever having a conversation with Big Steve about any of this. (This prompted conservative Star-Ledger columnist Paul Mulshine to write: "I believe him. No one ever gets to discuss anything with Adubato Sr. You just sit and listen.")

I believe Christie, too. After all, that's how politics works, right? The smartest players know the deal without anyone having to spell it out for them.

UPDATE: There's another Joe D. connection from Monday night's NJN vote. State Senator Nia Gill, another of the four Democrats to vote with Christie, works as a lawyer representing an Essex County agency. That Gill is now so dependent on Joe D and his empire is a jarring development for those whose memories of New Jersey politics go back a few years. Back in 2003, when she sought reelection to the Senate for the first time, Gill found herself targeted by the heavyweights of the Essex Democratic organization, Joe D (then in his first year as county executive) included. They sponsored a primary challenger against her and she lashed out publicly against them -- even including images of Joe D and Big Steve in campaign mailers that suggested she was being singled out for not being part of the old boys network. Gill ended up surviving that 2003 primary by ten points and has not faced a serious reelection challenge since.