He's the GOP's chief debt ceiling negotiator. He's also invested in a fund that will skyrocket if there's a default 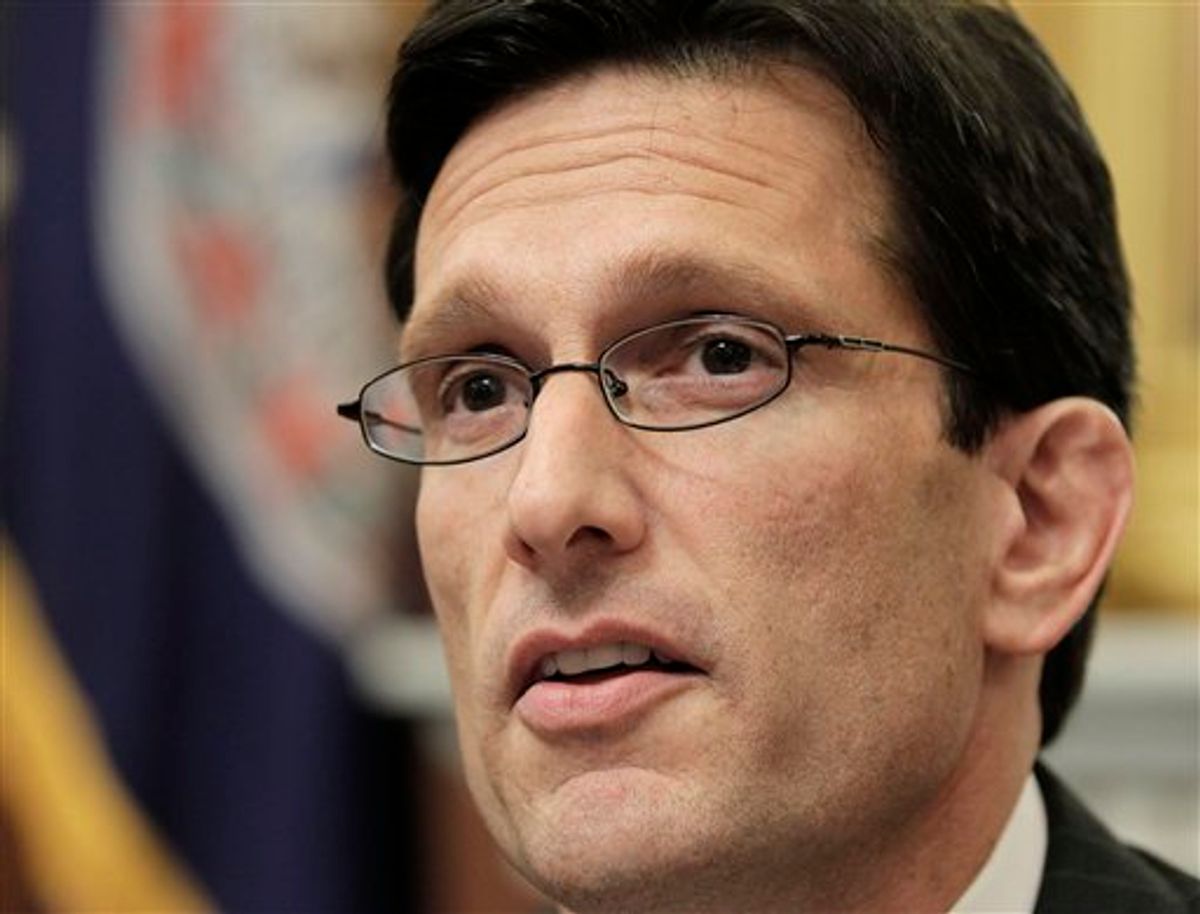 When Eric Cantor shut down debt ceiling negotiations last week, it did more than just rekindle fears that the U.S. government might soon default on its debt obligations -- it also brought him closer to reaping a small financial windfall from his investment in a mutual fund whose performance is directly affected by debt ceiling brinkmanship.

Last year the Wall Street Journal reported that Cantor, the No. 2 Republican in the House, had between $1,000 and $15,000 invested in ProShares Trust Ultrashort 20+ Year Treasury EFT. The fund aggressively "shorts" long-term U.S. Treasury bonds, meaning that it performs well when U.S. debt is undesirable. (A short is when the trader hopes to profit from the decline in the value of an asset.)

According to his latest financial disclosure statement, which covers the year 2010 and has been publicly available since this spring, Cantor still has up to $15,000 in the same fund. Contacted by Salon this week, Cantor's office gave no indication that the Virginia Republican, who has played a leading role in the debt ceiling negotiations, has divested himself of these holdings since his last filing. Unless an agreement can be reached, the U.S. could begin defaulting on its debt payments on Aug. 2. If that happens and Cantor is still invested in the fund, the value of his holdings would skyrocket.

"If the debt ceiling isn’t raised, investors would start fleeing U.S. Treasuries," said Matt Koppenheffer, who writes for the investment website the Motley Fool. "Yields would rise, prices would fall, and the Proshares ETF should do very well. It would spike."

The fund hasn't significantly spiked yet because many investors believe Congress will eventually raise the debt ceiling. However, since Cantor abruptly called off debt ceiling negotiations last Thursday, the fund is up 3.3 percent. Even if an agreement is ultimately reached before Aug. 2, the fund could continue to benefit between now and then from the uncertainty. (One tactic some speculators are using is to "trade the debt ceiling debate" -- that is, to place short-term bets on prices as they fluctuate with the news out of Washington.)

Salon's Andrew Leonard calls the debt ceiling negotiations "Washington’s titanic game of chicken," and the longer the game goes on, the more skittish the bond markets will become.

"Cantor's involvement in the fund and negotiations is not ideal," Koppenheffer said. "I don’t think someone negotiating the debt ceiling should be invested in this kind of an ultra-short. We can only guess how much he understands what’s in his portfolio, but you’d think a politician would know better. It looks pretty bad."

Cantor spokesman Brad Dayspring noted that U.S. Treasury bonds make up a large portion of the congressman’s pension, and said investment in ProShares ETF serves to balance that investment and to diversify his portfolio. Disclosure forms indicate that Cantor has considerable personal assets, including real estate in Virginia worth up to $1 million, and a number of six- and seven-figure loans to private entities and limited liability companies. So his investment in ProShares ETF represents only a small portion of his overall portfolio -- but that share could grow a little larger just over a month from now.