Updated: By restricting regulations, these pacts give even more license to multinational companies 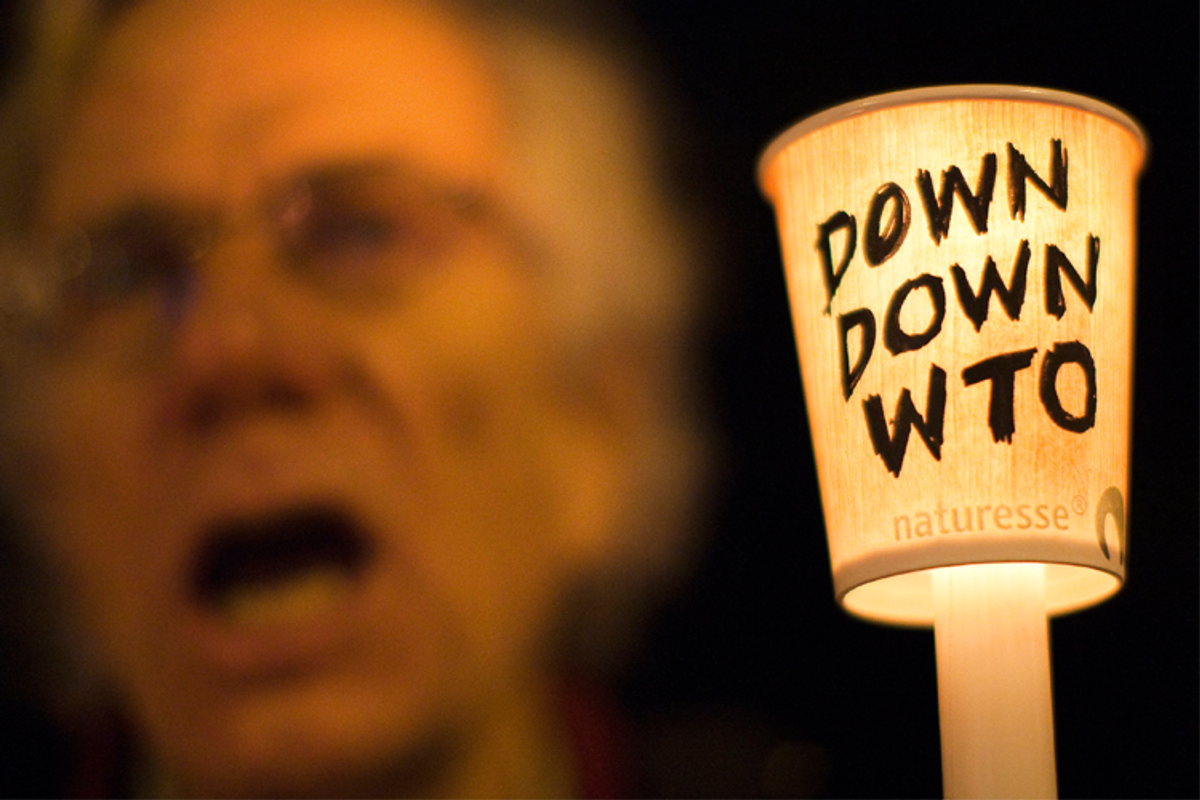 A protestor holds a candle during a demonstration against the WTO in Geneva on November 30, 2009
--

Trade policy, as I've previously noted, often has nothing to do with what we conventionally define as "trade" -- that is, it has nothing to do with the exchange of goods and services, and everything to do with using state power to solidify corporations' supremacy over individual citizens. In that sense, the modern era's ongoing debates over "free trade" are a corporate public relations coup -- by tricking the public and the media into believing we're debating one thing (commerce) when we're debating something entirely different (power), the "free trade" brand casts those who raise questions about these pacts as know-nothing Luddites (who could be against commerce, right?).

The PR magic, however, may be running out. Polls now consistently show that Americans are deeply suspicious of all the "free trade" triumphalism they've been fed -- and for good reason. In creating direct unprotected competition between Americans and foreign workers who have no labor, wage or human rights protections, the most celebrated trade pacts of the last two decades have -- quite predictably -- resulted in widespread layoffs and the hollowing out of America's middle class job base.

At the same time, corporate-backed politicians who continue to push for new trade pacts are resorting to such twisted rhetoric that they end up undermining their own arguments. Last month, for instance, the Obama administration undercut its assertion that the proposed Korea Free Trade Agreement would be a net job-grower in America when it subsequently declared that a domestic job displacement program was a necessary part of the deal (Why would you need to expand existing job displacement programs if a trade pact was going to be a net creator of jobs??). Then this month, as Eyes on Trade shows, the administration's International Trade Commission report openly predicted that the Korea deal will kill manufacturing jobs.

So on the jobs issue alone, Americans are rightly skeptical when they hear a Wall Street-funded politician tell them that a new trade pact is about new job-creating exports, rather than about helping corporations offshore even more domestic jobs. But they are also right to suspect -- however vaguely -- that these pacts are also screwing them in other ways that have little to do with the standard buying and selling of goods. The last few weeks give us a good example of how those other little-examined parts of "trade" policy works.

First up was a Wall Street Journal story about how the Obama administration -- an administration actively courting Wall Street campaign contributions -- has backed financial deregulation mandates into the Korea deal. Reporting on how powerful leaders in Korea's national legislature are sounding the alarm, the paper notes that the deal may limit the kind of capital controls Korea may want to use to prevent a U.S.-style financial meltdown from hitting their shores.

Then came news that multinational firms are using the World Trade Organization to prevent nations from trying to build up their domestic green-energy industries. This follows the Obama administration's similar -- and successful -- efforts directed at China.

Now, the Associated Press reports that the tobacco industry is using a "free trade" pact between Hong Kong and Australia in an effort to prevent the latter nation from mandating graphic anti-smoking warning labels. The companies are using the pact to sue for potential intellectual property losses, arguing that the new public health labels will unduly cut into their profits. The innovative legal action is a new twist on a now-standard move whereby companies cite "investor rights" provisions in trade deals to sue for revenues lost at the hand of countries' domestic public health laws.

Coincidentally, I predicted last week that the tobacco companies will consider legal action to block our own FDA's graphic new anti-smoking warning labels. I suggested that a suit might use anti-First Amendment statutes in states -- but clearly, a suit could also use one of our many bilateral trade pacts to achieve the same result. That's because on so many issues, current "free trade" policies are about far more than just "trade" -- they are a direct assault on our sovereignty and we should start labeling them as such.

UPDATE: Sen. Sherrod Brown (D-OH), one of the few senators who is upfront about trade policy, just issued a press release noting, "It's no surprise Americans are cynical over empty promises about jobs created through free trade agreements like Korea -- particularly when these agreements are coupled with assistance for workers who lose their jobs to trade." He's exactly right -- if a trade deal was truly going to be a net grower of jobs, we wouldn't simultaneously need to EXPAND trade adjustment assistance. The fact that the administration says we do -- at the same time its own numbers say these trade deals kill jobs -- shows just how empty the pro-"free-trade" rhetoric really is.