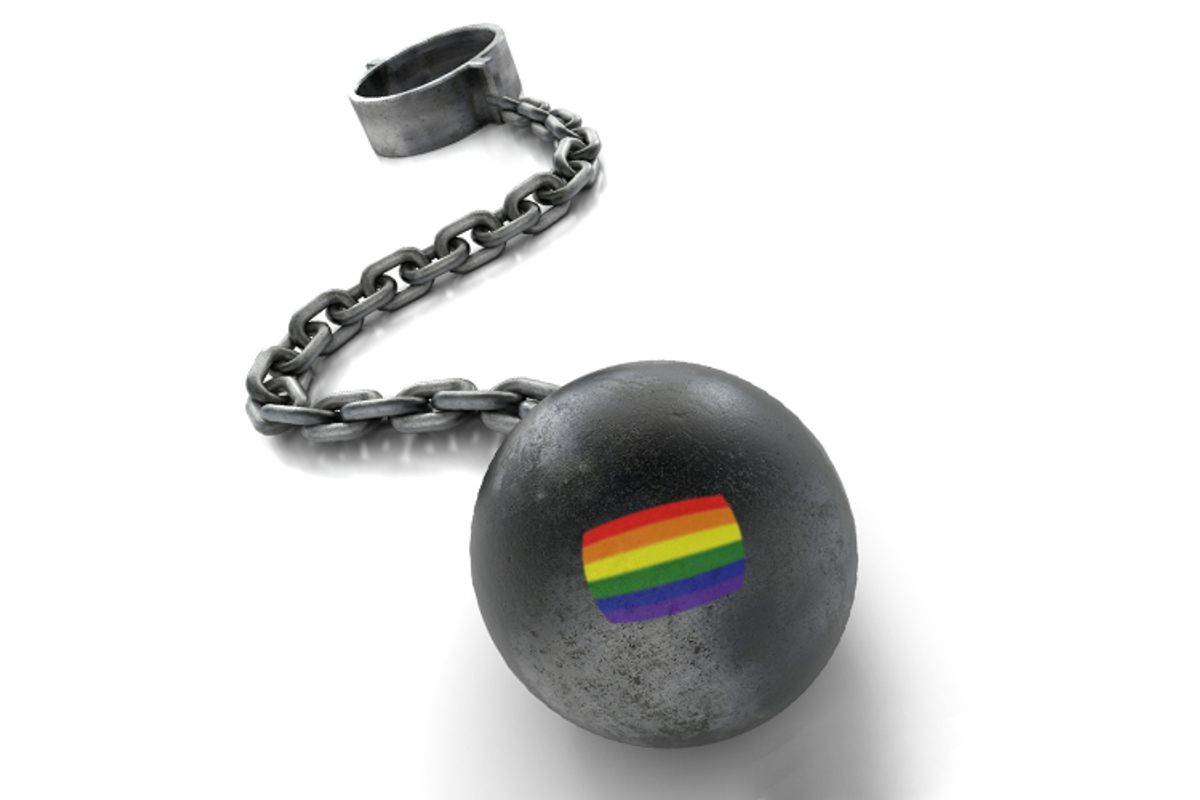 With the sixth and largest U.S. state legalizing same-sex marriage, I began to wonder about the impact on gay relationships as a whole. Will dating become fraught with the prospect of a governmentally recognized happily ever after? Will the fairy-tale fantasy take hold in the same way it has for heterosexuals and shape romantic dynamics? I took these questions to some smart thinkers on LGBT issues and, resoundingly, the answer was: Um, that's already happened.

The gay community has long prided itself on the acceptance of more fluid romantic, sexual and familial relationships -- "alternative" lifestyles, if you will -- but for some time now, same-sex marriage has been the cause célèbre. "A generation of upper-middle-class white lesbians and gays are already enamored by the idea of marriage," Laurie Essig, a professor of sociology at Middlebury College, told me. The "ideology of romance" affects gays and lesbians as much as everyone else, she says. They are just as eager to "ride off into the sunset" with that person who "meets all of your emotional and sexual needs."

Michael Amico, a 26-year-old gay man and graduate student at Yale studying the history of sexuality, told me, "Ever since marriage was the gay issue, the diversity of types of gay relationships has narrowed," he said. "The major difference with my generation and those who were my age in the '70s and '80s is, I find, that no one can have a conversation about an open relationship." He points out that most young gay people consider same-sex marriage to be the No. 1 most important issue to them. "My question is, 'Why is it important to you? How does it matter to you?'"

First and foremost, marriage seems to matter to gays for the same reason it matters to straights: a sense of romantic commitment and security. As Kelly McClure wryly wrote in a piece for Vice, "We can now legally, and in writing, demand that the person we love never ever leave us. EVER!! Or you know, until they sign another legal document that says they can." (With the right to marry comes the right to mock it.) In the piece, titled "How Gay Marriage Will Change Lesbian Relationships," she points out that the ol' joke about what a lesbian brings to a second date (a Uhaul) will need a new punch line: a wedding ring.

On a more serious note, McClure explained in an email that the same-sex marriage ban never prevented her from playing house with girlfriends: "I've worn rings with partners in the past as a homemade version of being 'married,'" the 34-year-old New Yorker told me. "Now that gays can get legally married, I hope it feels as real as it is, and not just like an extended version of the fantasy land that we find ourselves flitting in and out of with our partners." The dream of the white wedding took hold long before same-sex marriage was even on the table -- and of course. "Everybody is told from the age of 2 that you're gonna grow up to be married," Michael Bronski, author of "A Queer History of the United States," says. "We have a $40 billion a year wedding industry."

It isn't just young gay adults who have subscribed to the marital fairy tale. Bronski, who teaches women's and gender studies at Dartmouth College, tells me that his gay male students often express that "their parents, their mothers in particular, are really happy that they can get married and they are looking forward to them finding the right guy." These parents are part of a generation whose view of male homosexuality was shaped by the AIDS epidemic. "For them, marriage is not so much the happy ending as safety -- which is a complete fantasy, of course," he says. "The parents think of same-sex marriage as a prophylactic."

The ideal of monogamous domesticity has hardly halted gay hookup culture on campus. "It's possible to have fantasies that are not congruent," Bronski points out. From talking with his gay students, he says it's perfectly normal for a young gay man to think that he's going to meet a great guy, get married and have kids at the same time that he's thinking, "Let's see who's on Manhunt right now!" When he asks his students -- gay, straight or bi -- about whether they want to get married, the usual response is, "I'd like to but I'm not planning on it right now." In other words, they're hooking up until they meet Mr. or Mrs. Right and settle down, just like their straight classmates.

To some in the LGBT community, it all seems so traditional, so straight. "The last few times I've gone to Pride, I've chanted with friends, 'Put the alternative back in alternative lifestyle,'" Essig, author of "Queer in Russia," tells me. Her concern is that marriage ultimately doesn't make for a healthier, happier existence. "It diminishes the possibility of authentic human connection, because we're living off this script written by Disney or from some bad Julia Roberts romcom," she says. Essig expressed a similar sentiment in Salon in 2000: "What annoys me is that no one, not even queers, can imagine anything other than marriage as a model for organizing our desires," she wrote. "In the past, we queers have had to beg, cheat, steal and lie in order to create our families. But it's exactly this lack of state and societal recognition that gave us the freedom to organize our lives according to desire rather than convention."

The marriage equality movement has inspired a small minority of gays and lesbians to speak out against same-sex and opposite-sex unions alike (see: Againstequality.org). In "Beyond (Straight and Gay) Marriage," Nancy Polikoff argues that marriage "is not more important or valuable than other forms of family, so the law should not give it more value," and people "should never have to marry to reap specific and unique legal benefits." If you thought the fight for gay marriage was contentious, just try to imagine a widespread movement to tear down the institution as a whole.