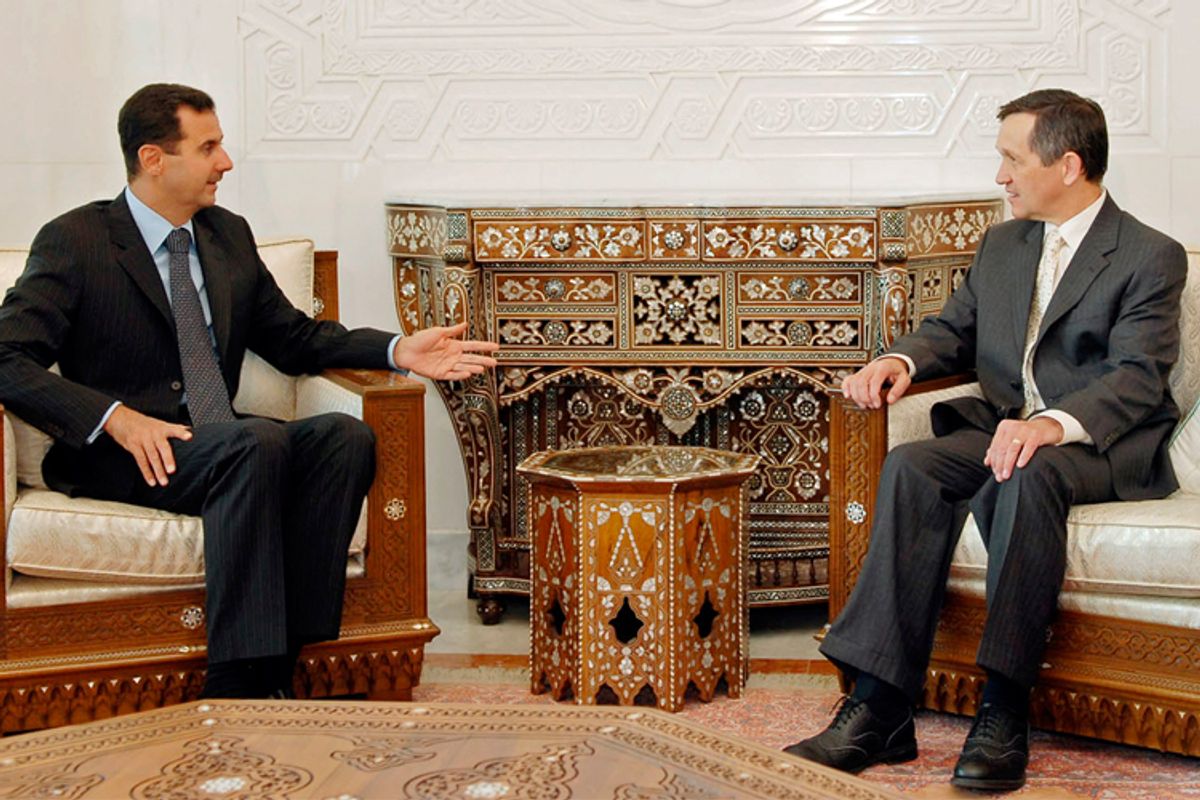 Rep. Dennis Kucinich announced yesterday that he had embarked on a "fact-finding mission" to Syria and Lebanon to meet with "democracy activists, non-governmental organizations, small business owners, civilians as well as government officials."

But if these Kucinich quotes reported by the Syrian state news agency are accurate, the congressman's reputation as someone who is serious about human rights will sustain serious damage:

The U.S. Congressman described what is taking place in terms of the meetings of opposition and independent figures who are expressing themselves and their views openly and freely as "a largely positive progress", saying "President Bashar al-Assad cares so much about what is taking place in Syria, which is evident in his effort towards a new Syria and everybody who meets him can be certain of this."

"President al-Assad is highly loved and appreciated by the Syrians," said Kucinich, voicing his belief that people in Syria are seeking a real change which is up to them. ...

He continued saying "All whom I talked to during the last few days spoke about the importance of stopping violence. It is very important to stop violence, and this is a responsibility the government is aware of and deals with seriously."

I've asked Kucinich's press secretary if this article -- which seems to use broken English -- is accurate. I will update this post if I hear back. (We do know that, in an interview with the Cleveland Plain Dealer last month, Kucinich primarily blamed the protesters for the violence.)

If Kucinich did make these new statements -- that Assad is "loved" by Syrians, and that the government is taking steps to end violence -- it's worth noting that the reported facts suggest the exact opposite.

Specific numbers are hard to come by because the Syrian regime expelled Western reporters from the country, but reports suggest that over 1,000 civilians have been killed in a violent military crackdown against protesters. Thousands more have fled to neighboring Turkey and Lebanon.

Here is a CNN interview with a Syria researcher from Human Rights Watch:

UPDATE: Kucinich's press secretary sends over a statement from the congressman disputing the article, saying it misquoted him:

Today, the Syrian Arab News Agency published an article that contained a number of mistranslations and mischaracterized statements that I made during a news conference in Damascus.

While on fact-finding mission in Syria, I was asked to share my initial reactions with some journalists, which I did. During my remarks I stressed the importance of the government paying attention to the democratic aspirations of the people of Syria. It is up to the people of Syria to decide the future of their government. There is a process of national dialogue beginning and this process is important. It is important that the Assad government listen carefully to the just demands and act positively to fulfill the democratic aspirations of the people of Syria. The process of national dialogue which has now begun is a step in the direction of identifying necessary reforms.

I did not come to Syria with my mind made up. After discussions with people at many different levels of the society, I am convinced of the need for honesty, fairness and dialogue.

A story written about my remarks by the Syrian Arab News Agency unfortunately mistranslated several of my statements and did not reflect my direct quotes. Arab-speaking friends accompanying me have explained that the problem may have come from a mistranslation as well as the degree of appreciation and affection their state-sponsored media has for President Assad.

It is unfortunate that translation errors can create such problems. Given the stakes for Syria and the region, I will consider the article only an error, not a willful intent to mischaracterize my statements or my efforts in the region.

I intend to continue my efforts to determine as best I can exactly what is happening in Syria, ever more mindful of the maxim, “lost in translation.”

When Kucinich's actual remarks are available, I will update this post again.