The great myths of globalization 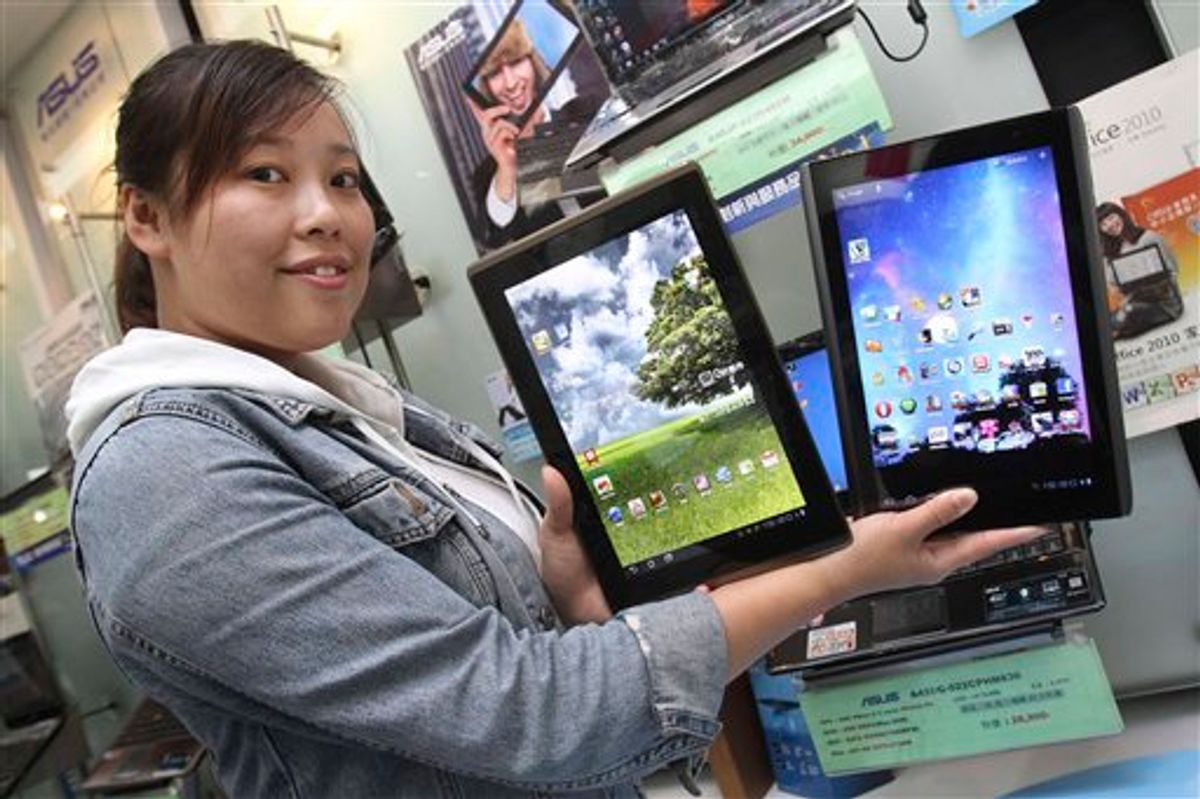 A showroom employee displays tablet computers from Taiwan's top two PC vendors, Acer Inc. and AsusTek Computer Inc. in Taipei, Taiwan, Saturday, May 28, 2011. Dozens of global computer firms and their obsession to get a piece of the expanding tablet computing market will be on full display Tuesday May 31, 2011, as Computex, the world's second largest computer show, begins its annual five-day run in Taipei. (AP Photo/Chiang Ying-ying) (AP)
--

Today, shrill free traders continue to debate strident protectionists, as though we still lived in a world where purely national corporations shipped finished products to other countries in return for different kinds of products. The picture of globalization as the inevitable emergence of a single global market in which countries specialize along the lines of absolute advantage (Adam Smith) or comparative advantage (David Ricardo) has long been at odds with reality. The majority of the world’s trade is intra-industry trade in similar goods among the advanced industrial regions, not inter-industry trade in complementary goods among countries with different land or labor endowments. The U.S. and Europe sell each other cars and computers, while Japan deviates from the pattern by using nontariff barriers and currency manipulation to keep out imports. In addition, the world economy is highly regionalized. Trade within each of the three parts of what some called "the triad" of North America, Europe and East Asia is more important than trade among the members of the Triad.

Even more at odds with the conventional wisdom about trade is the fact that between a third and a half of all so-called international trade is "intra-firm" trade, in which components are shipped to and from a multinational corporation’s subsidiaries or partners in different countries. This is not trade, in the traditional sense. It is transnational production.

Transnational production is the successor to national production, which in turn was the successor to local and regional production. Before the industrial revolution, most goods like tools and clothing were made from local materials in or near the place where they were consumed. Steam-powered factory production, combined with distribution by steam locomotives and steamships, created national and imperial markets in the nineteenth century that could support giant corporations that relied on the telegraph for coordination. Successive innovations in energy and communications -- the electric power plant, the telephone, the truck and automobile, jets, container ships, the internet and satellites -- have made possible global production networks which are replacing earlier purely national production networks.

Empirical economists have long known that in industries with increasing returns to scale, like automobiles and aerospace, or with network effects, like telecommunications, small companies tend to be weeded out and replaced by a single giant firm (monopoly) or a few large firms (oligopoly). In 1900, there were dozens of small, start-up automobile companies in the U.S.; by the 1950s there were the Big Three. The same trend is taking place at the global level, and for the same reason—not sinister conspiracies, but the fact that in some industries a few giant producers are more efficient than many small ones.

Between the end of the Cold War and the crash of 2008, globalization resulted in the organization of one global industry after another as an oligopoly. Before the crash in 2008, two companies, U.S.-based Boeing and Europe’s Airbus, had 100 percent of the global market share in large jet airliners. Among their suppliers, the global market for jet engines was divided among three firms: GE, Pratt and Whitney and Rolls-Royce. Microsoft enjoyed 90 percent of the global market share for PC operating systems. Four firms divided 55 percent of the PC market among themselves, while three companies shared 65 percent of the market for mobile handset phones. Three firms dominated the world market in agricultural equipment (69 percent) and ten companies dominated the global pharmaceutical market (69 percent). 95 percent of microprocessors ("chips") were made by four companies -- Intel, Advanced Micro Devices, NEC, Motorola. Four automobile companies -- GM, Ford, Toyota-Daihatsu, DaimlerChrysler -- manufactured 50 percent of all cars, while three firms -- Bridgestone, Goodyear and Michelin -- made 60 percent of the tires. Owens-Illinois and Saint Gobin made two-thirds of all the glass bottles in the world. (The data come from Peter Nolan and Jin Zhang, "Global Capitalism After the Financial Crisis," New Left Review 64, July/Aug 2010).

Are these emerging global oligopolies truly post-national enterprises, with no particular nation-state as a home? Populists of the left and right denounce rootless multinationals, and many CEOs claim to believe in a borderless world. In reality, however, most multinationals have national roots. The hundred largest multinationals in 2008 had only 57 percent of their total assets and only 58 percent of their total employment abroad, and foreign sales made up only 61 percent of their total sales. In other words, the typical multinational still had a distinct national identity, with around half of its assets, employment and sales within its home market. Few multinational corporations did an overwhelming majority of their business outside of their home countries. Those that did, such as Nestle and Ikea, tended to be based in small countries, so their markets were largely foreign. More typical were the large automobile companies, each of which assembled and sold a majority of its products in its home region, with a minority of its sales in other regions.

The rise of China as an export platform for multinational corporations based elsewhere obscures the continuing importance in manufacturing of Japan and Germany. According to the Asian Development Bank, much of the value added in the iPhone comes from components manufactured in Germany, Japan and South Korea, not in China, where they are merely assembled.

The domination of global commerce by corporations based in the U.S., Japan and Germany -- the three most populous industrial democracies -- proves that a large domestic market is still needed as a base for multinational sales and operations. Despite the celebration of global corporations by libertarians and their denunciation by leftists and populists, global companies turned out to have national identities after all during the crisis that began in 2008, when major banks and automobile companies turned to their home country governments for bailouts.

These are the facts that should provide the basis for an intelligent debate about globalization -- that is, transnational production. A model for such a debate might be the one that took place in the U.S. a century ago. Old-fashioned agrarians opposed modern industry and large corporations altogether. In the name of the New Nationalism, Theodore Roosevelt argued that giant national corporations could be beneficial, as long as they were regulated in the public interest. In the name of the rival school of the New Freedom, Woodrow Wilson and Louis Brandeis argued for anti-trust policies to break up large corporations and special favors for small producers and distributors.

Today we might substitute the global economy for the U.S. national economy of 1900 and today’s sovereign countries for the American states of a century ago. The equivalent of the agrarians of the 1900s are today’s old-fashioned protectionists, who idealize what was a recent innovation in its day -- the vertically-integrated national corporation of the mid-twentieth century. The neo-protectionists are no more likely to save purely national manufacturers than their agrarian predecessors were able to save local blacksmiths from competition with industrial manufacturing firms.

More realistic observers would accept a high degree of globalization but differ about how to respond. Here the analogy with the 1900s breaks down, because there is no global federal government to carry out either Rooseveltian or Wilsonian policies toward global corporations. Instead, a neo-Rooseveltian school of thought today might embrace global corporations, where they result from efficiency, but impose conditions on them in return for access to the market of the nation-state, including a degree of in-market production and in-market R&D.

A century ago, champions of the New Freedom sought to protect state and local businesses from national competition -- for example, by means of laws against chain stores that threatened local grocers. A neo-Wilsonian or neo-Brandeisian school of thought about the global economy might be more hostile to global enterprises and supply chains, favoring instead government support for largely national corporations -- "national champions."

Other countries pursue different versions of these strategies already. China, for example, has followed what I am calling a neo-Rooseveltian or New Nationalist strategy -- welcoming production in China by multinationals, as long as that results in jobs, training and technology transfer. Other countries or blocs pursue national champion strategies, when it comes to energy companies or airlines. Airbus, one of the world’s two major aircraft producers, is the European Union’s champion.

In-market production or national champions? This is the kind of debate we should be having -- not the tired old debate between academic free traders and nostalgic protectionists. It is certain that transnational production, in some form, is here to stay -- and it is just as certain that nation-states, democratic or otherwise, will use their power to shape the pattern of transitional production by global corporations to advance their own domestic and foreign policy goals, at the expense of the free market, if necessary.