An annotated guide to the economics of Michele Bachmann

The debt ceiling, stimulus, jobs and taxes: The Minnesota Republican has a plan, but the numbers don't add up 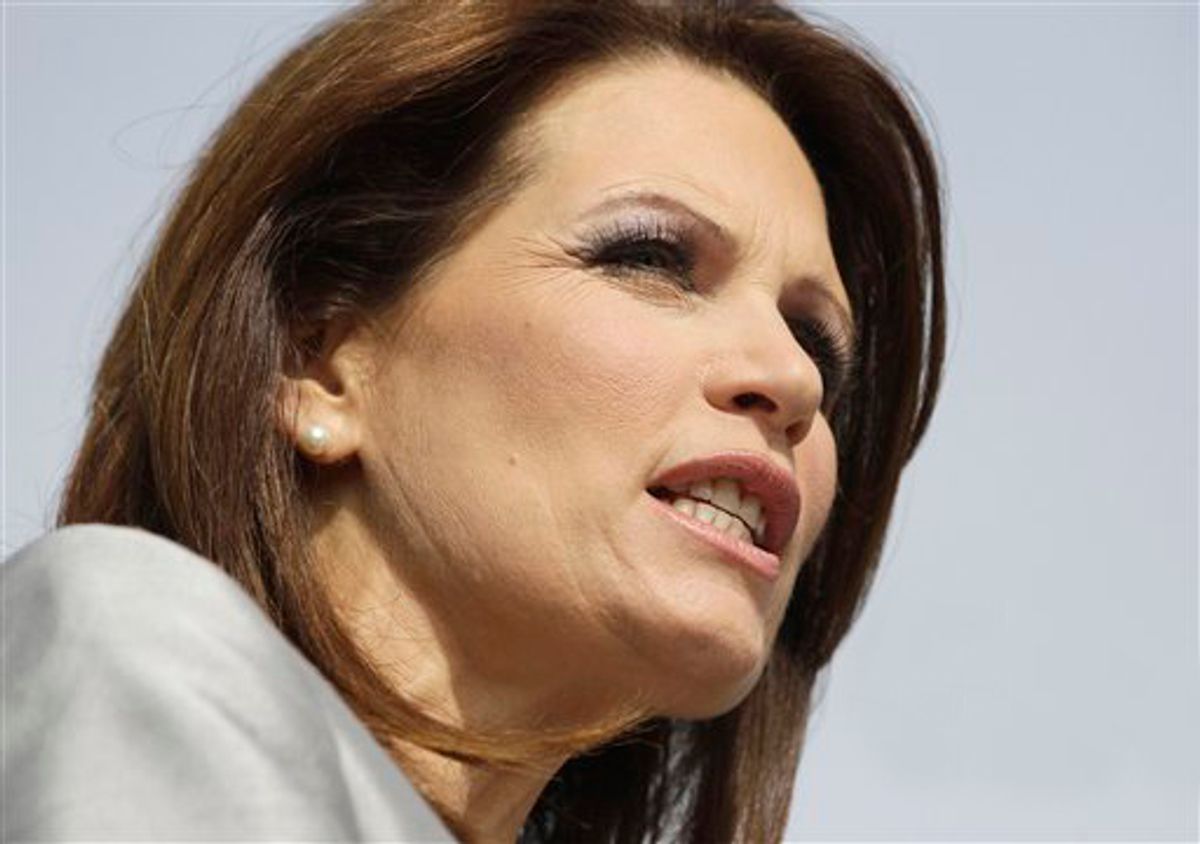 Bachmann stated that she would not vote to raise the debt ceiling "until I see a serious legitimate reduction in spending." When questioned about the possible disastrous financial consequences of a failure by the United States to make good on its obligations, she blithely dismissed any possible negative fallout.

"The interest on the debt can easily be paid for .... and that would mean that we wouldn't default. Then we would continue the full faith and credit of the United States. I think these are scare tactics by the Obama administration, because clearly this is the Obama debt, this is the Obama deficit and this is the very poor working Obama economy. "

Bachmann is making the argument here that the U.S. can choose to pay its creditors -- the various holders of government-issued debt -- first, and thus not technically be in default. It's an open question whether credit rating agencies and bond investors will accept that technicality. China might get paid in full, but millions of Americans would immediate get stiffed. Of course, Bachmann doesn't mention that choosing such a strategy would require extraordinarily severe and immediate spending cuts -- around $4.5 billion a day -- in programs such as Social Security, Medicare, defense, unemployment benefits, et cetera. Economists generally agree -- the negative economic impacts of such drastic short-term cuts in government spending would almost surely drive the U.S. straight back into recession.

Furthermore, a failure to reach agreement on the debt limit would guarantee bond market jitters, pushing up interest rates and raising the cost at which the U.S. government can borrow funds -- and thus end up increasing the deficit.

I'm reasonably sure I'll be debunking this blatant falsehood when I'm on my deathbed. But once more into the breach! When Obama took office, the deficit was already $1 trillion -- a result of Bush's tax cuts, unpaid-for wars and prescription drug benefit giveaways, TARP, and the recession. The tax cuts alone will account for more than $7 trillion worth of additional debt over the next 10 years. And no matter who had been elected president in 2008, there was no magic wand that would have averted the devastating impact of the Great Recession, which simultaneously hammered government tax revenues while requiring vast outlays in automatic payments -- unemployment benefits, food stamps, etc.

It's always fun to try to imagine the counterfactual. What would John McCain have done? Stood pat, and simply watched the American economy hemorrhage half a million jobs a month? Unthinkable. Cut spending on the social safety net to balance the budget at a moment of great national crisis?  Equally ludicrous! Pass even more tax cuts -- the standard GOP response to good times and bad -- than Obama did? The deficit would be even bigger!

Sure, any president three years into his term gets blamed for the status quo. But no U.S. president since Franklin Roosevelt came into office facing a worse economic situation, and it's interesting to wonder how even FDR would have fared if he had been faced with the task of pushing through legislation against the will of today's Republican Party.

"Stimulus did not create jobs. Stimulus has actually led to a reduction in jobs."

Simply asserting this does not make it so. The Congressional Budget Office says otherwise. The private economic forecasting firm Macro Advisers says otherwise. So did Moody's Investor Services. And then there's the ever-popular (with Democrats) chart of job loss and creation since January 2008. The vast majority of job loss attributable to the Great Recession occurred during the last four months of Bush's administration and the first five months of Obama's administration. But over the course of the period during which stimulus funding was actually distributed, the job numbers steadily improved. Over the last year, the economy has added more than a million jobs.

"First of all, we need to have the federal government stop spending money ... Number 2 ... The United States has one of the highest tax rates on doing business in this country. We need to lower that rate so the United States has a positive climate to create jobs. Number 3: We have a 1.7 trillion dollar burden on job creators in the form of regulations. We need to go in and examine all the regulations..."

1) Spending. We may get the chance to find out sooner than we would like what exactly happens when the federal government stops spending money while the economy is slowing, so maybe we should just wait and see the result. But, briefly put, the evidence that austerity might result in job growth in an economy facing current U.S. conditions is slim.

At the risk of repeating myself:

Actually, as measured in terms of share of GDP, the U.S. has the lowest corporate tax burden of any OECD nation. While the official tax bracket may seem high -- 35 percent -- if one takes into account various loopholes and tax dodges, the effective tax rate is considerably lower, or around 27 percent, which comes in as slightly higher than average for OECD members. And according to ace tax reporter David Cay Johnston, the bigger you are, the less you pay -- the effective tax rate for the biggest U.S. corporations is only about 15 percent.

This number comes from a study conducted by the "advocacy" office of the Small Business Administration in 2008. In April 2011, the Congressional Research Service published an extensive critique of the calculations that went into that number. The most glaring eye-opener? "[The authors] said they did not provide estimates of the benefits of regulations, even when the information was readily available, because the SBA Office of Advocacy did not ask them to do so. OMB's reports to Congress have generally indicated that regulatory benefits exceed costs."

So there you have it: Michele Bachmann's economic platform. In the final analysis, perhaps the most striking thing about her proposals is how conventionally Republican they are. There's not a whole lot of new thinking here, aside from the admittedly radical notion that the United States can get away with failing to raise the debt limit. Other than that, it's a typical mish-mash of misrepresentations and numbers that don't add up.