The rise of the Chris Christie Democrats 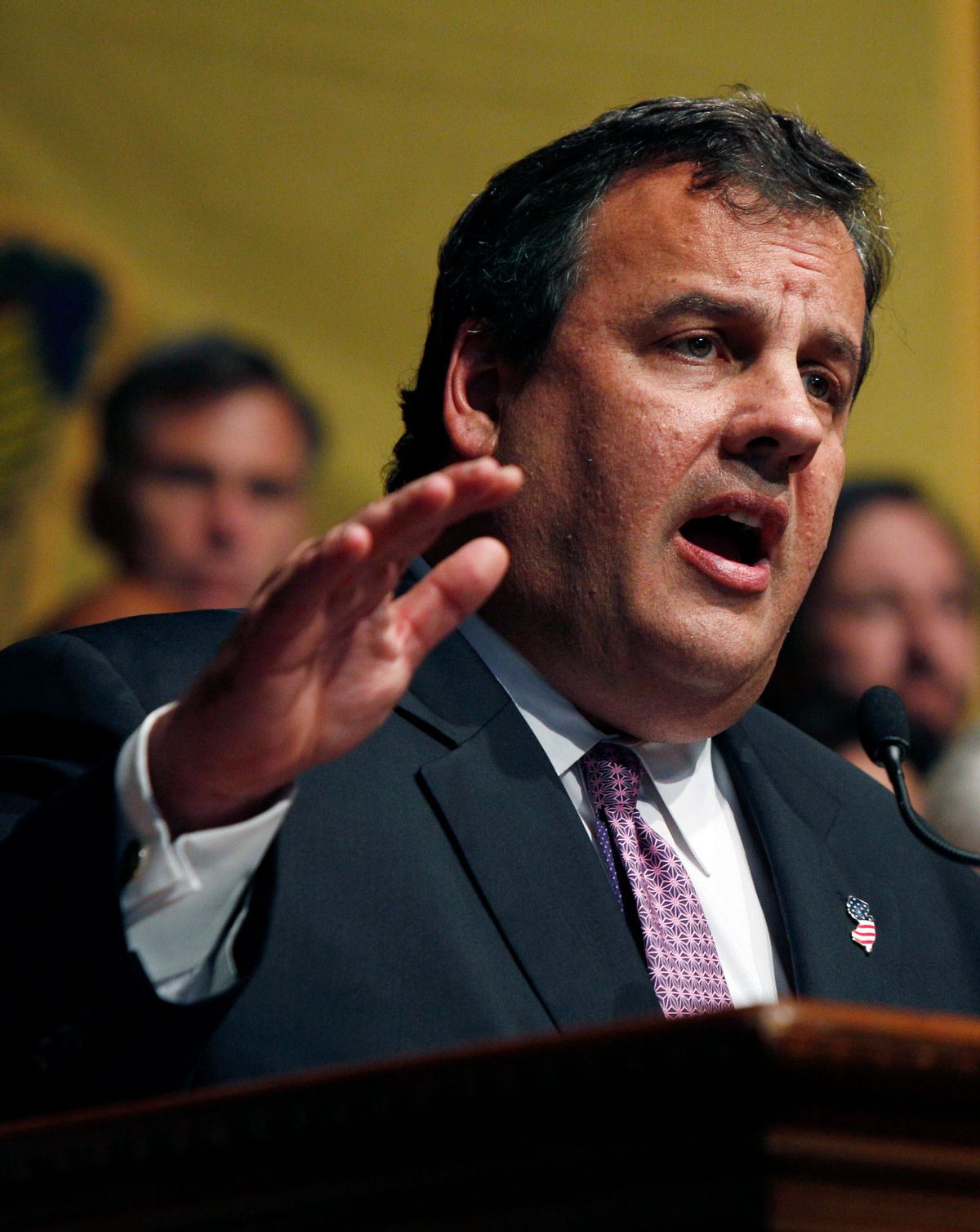 It's understandable if Democratic activists in New Jersey and around the country are confused and enraged by the headlines from Trenton: A massive rollback of benefits and bargaining rights for public employees and the giveaway of the state's public television station -- both ratified with Democratic votes by a Democratic-controlled legislature. In other states, Democratic legislators are standing together to fight Republican governors, but in New Jersey they're giving Chris Christie the pivotal votes he needs to enact his agenda.

We've previously explained the basics of what's going on here. Christie, whose gubernatorial ambitions were well known years in advance his 2009 campaign, began cultivating friendly, symbiotic relationships with two key Democratic bosses well before he even became governor: South Jersey's George Norcross and Steve Adubato Sr. from Newark. It's a widely held view by insiders from both parties in New Jersey that Norcross and Adubato essentially left Governor Jon Corzine to wither on the vine in the '09 campaign, boosting Christie's prospects in the Democratic state. In fact, Christie's first public appearance after his victory that fall was with Adubato in the heart of his political/educational/social services empire in Newark's North Ward. On the public employee benefits and public television votes this past week, just about all of the Democratic defections can be linked to the Norcross and Adubato camps.

But there's another question worth exploring: How did the Norcross and Adubato camps gain so much power within the Democratic Party? After all, the president of the state Senate, Stephen Sweeney, is a Norcross loyalist, while the Speaker of the Assembly, Sheila Oliver, also holds and $83,000-a-year job working for Adubato's protege, Essex County Executive Joe DiVincenzo. But if either the Senate or the Assembly were run by non-Norcross/Adubato loyalists, the past week might have played out very differently -- and Christie's benefits overhaul might have been dead on arrival.

The answer can be found in an only-in-Jersey backroom deal that was struck at the height of the 2009 campaign -- one that dethroned Richard J. Codey, the long-serving Democratic Senate president, in favor of Sweeney and set up Oliver to claim the Speaker's gavel. When news of the deal broke that fall, it marked yet another embarrassment for the beleaguered Corzine, who was locked in a tight race with Christie and facing intense voter skepticism about his leadership skills. Corzine was pleading with voters that he was focused on rescuing the economy -- but here was his party in Trenton, preoccupied with who would have what title in the next legislative session.

The deal itself was years in the making, the culmination of the rise of Norcross and his South Jersey operation. A wealthy insurance executive who counts Donald Trump among his friends, Norcross has mixed business and politics to slowly build a massive, lavishly-funded Democratic machine in South Jersey.

Over the last two decades, Norcross has built a stable of thoroughly loyal state senators and assemblymen, often using truly shocking sums of cash to win over Republican-held seats -- more than $4 million in one state Senate race in 2003. As Norcross assembled a turnout machine and amassed clout in Trenton, he became a kingmaker in state Democratic politics. For instance, when Senator Robert Torricelli, his poll numbers ruined by an ethics scandal, abruptly withdrew from his reelection bid five weeks before the 2002 election, Norcross was one of a select few Democratic leaders who huddled with then-Governor James McGreevey to choose a replacement candidate.

Ideologically, Norcross is all "New Democrat," uneasy with the party's close identification with minorities and public employee unions and committed to making it marketable to suburbanites. His critics on the left believe he is philosophically aligned with the Republican Party but that he saw an opening to amass more influence by seizing and building what had been a feeble South Jersey Democratic operation.

His goal had long been to move loyalists into the three plum spots in Trenton -- Speaker, Senate president, and governor. After the 2001 elections, he took his first step, working with Governor-Elect McGreevey to oust a North Jersey Democrat named Joe Doria as the party's Assembly leader. Norcross still didn't have the numbers to install his own choice as Speaker, but a compromise was struck: A backbencher from North Jersey named Albio Sires would take over as Speaker for a term or two, at which point it would be safe for Norcross' candidate -- Joe Roberts -- to take over. Sires played along, serving two terms, then stepping aside. He was rewarded with a congressional seat, which he still holds today. Roberts became the Speaker in January 2006.

Norcross' next goal, the Senate presidency, was tougher to come by, mainly because Codey, who first came to Trenton in the early '70s, was so entrenched and skilled at self-protection. To say that Norcross despises Codey would be putting it mildly. Throughout the 2000s, he made it clear that one of his chief missions in politics was to get rid of Codey. Norcross tried in 2003, but Codey outwitted him. Then came McGreevey's shocking resignation in August 2004, after which Codey was elevated to acting governor for 15 months -- a period of time in which New Jersey residents seemed to fall in love with the self-deprecating, youth basketball-coaching, accidental governor. Codey wanted to extend his interim term and to run for a full term in 2005, but he was forced to back down months into his stint when Norcross and the state's other Democratic bosses all lined up with Corzine (who plied virtually every county and municipal Democratic organization in the state with money). So Codey deferred to Corzine, racked up a year of enviable press, and left office as one of the state's most popular politicians.

He still had the Senate presidency, though (New Jersey didn't yet have a lieutenant governor), and with his sudden fame and popularity, he was impossible to dislodge. So Norcross bided his time and waited for the right moment -- which finally came in 2009.

By that point, Codey's celebrity had faded a bit, and so had his grip on his colleagues. And then there was the Adubato/DiVincenzo factor: Norcross had waded into Essex County (which encompasses Newark and the surrounding area) to support DiVincenzo in the Democratic primary for county executive. Codey and most of the Essex Democratic establishment backed DiVincenzo's rival. When DiVincenzo won, Norcross suddenly had a powerful and grateful ally in a key county -- an ally who came through for him seven years later, when Norcross made his run at Codey. 12 Senate votes were needed to oust Codey, and two of them ended up coming from Essex: Teresa Ruiz, who also works as DiVincenzo's deputy chief of staff; and Nia Gill, who does legal work for Essex County.

That two Essex senators would turn on Codey was shocking, given that Codey is from Essex. But as part of the deal, the job of Assembly Speaker would be vacated by Roberts and given to a Democrat from Essex County -- Oliver, who also works for DiVincenzo. So it was a good deal for DiVincenzo and Adubato. Sure, their county lost the Senate presidency, but they'd never liked or gotten along with Codey, and now their lieutenant would be running the Assembly. And it was a great deal for Norcross, who was able to claim a big prize for one of his proteges, Sweeney, while still having wide influence with the Assembly Speaker. With this deal, George Norcross -- an unelected backroom player -- became the most powerful Democrat in Trenton.

And now we are seeing the results. If Dick Codey were still running the Senate, the benefits overhaul would surely never have reached the floor, and the outcome of the public television bill -- only one more vote would have killed the giveaway -- would have almost certainly been different. But instead, Codey is now a backbencher, so all he could do was vote against Christie's agenda -- and watch as some of his fellow Democrats provided the crucial votes to make it law.