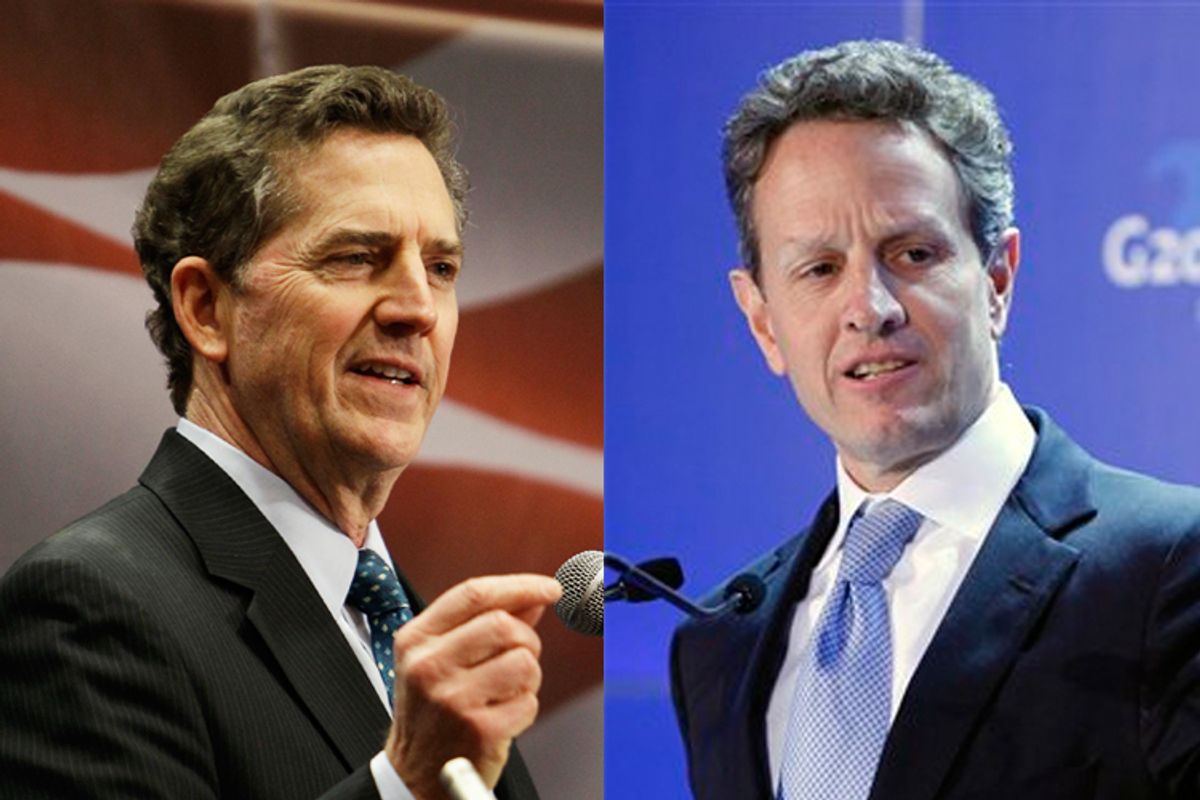 Treasury Secretary Timothy Geithner doesn't have many fans among progressive Democrats, but even the most hardhearted critic of his Wall Street-friendly regime might be able to take some satisfaction in the dressing down he delivered on Wednesday to Sen. Jim DeMint, R-S.C.

DeMint is one of the most prominent supporters (along with presidential candidate Michele Bachmann) of the notion that the U.S. government won't automatically default on its obligations if Congress fails to raise the debt limit. DeMint believes that Geithner can "prioritize" interest payments on debt over other government spending commitments, and thus escape a failing grade from the bond markets.

This has always been a ridiculous notion, but Geithner's letter provides the most in-depth and strongly worded rebuttal we've heard from the Obama administration so far.

I have expressed my concerns about this idea before, but I will restate them to be clear: this "prioritization" proposal advocates a radical and deeply irresponsible departure from the commitments by Presidents of both parties, throughout American history, to honor all of the commitments our Nation has made...

At its core, your letter is based on an untested and unacceptably risky assumption: that if the United State were to continue to pay interest on its debt -- yet failed to pay legally required obligations to its citizens, servicemen and women, and businesses -- there would be no adverse market reaction and no damage to the full faith and credit of the United States. Again, this idea is starkly at odds with the judgment of every previous Administration, regardless of party, that has faced debt limit impasses.

"Prioritization" also fails to account for how payments on principal would be made if investors were to lose confidence in U.S. creditworthiness. In August of this year, for example, more than $500 billion in U.S. Treasury debt will mature. Under normal circumstances, investors who hold Treasuries purchase new Treasury securities when the debt matures, permitting the United States to pay the principal on this maturing debt. Yet in the scenario you advocate, in which the United State would be defaulting on a broad range of its other obligations, there is no guarantee that investors would continue to re-invest in new Treasury securities. In fact, some market participants have already indicated that they would be disinclined to do so. As one of the major ratings agencies concluded in a recent report, failure to pay non-debt obligations "would signal sever financial distress and potentially imminent debt default," prompting the U.S. sovereign rating to be placed on "Rating Watch Negative."

If investors chose not to purchase a sufficient volume of new Treasury securities, the United States would be required to pay the principal on maturing debt, and not merely the interest, out of available cash. Yet the Treasury would be unable to make these principal payments without the continued confidence of market participants willing to buy new Treasury securities. Your proposal assumes markets would be unconcerned by our failure to pay other obligations. But if this assumption proved incorrect, then the United States would be forced to default on its debt.

Geithner is undoubtedly correct on this. As he notes elsewhere in the letter, the U.S. government is currently is borrowing 40 cent on every dollar. Without an agreement to raise the debt limit, the government would thus have to cut its current spending by 40 percent. Never mind the fact that spending cuts on that scale would immediately plunge the economy into recession. The fantasy that "market participants" would stand by and watch such the U.S. government commit fiscal suicide without running for the hills screaming in holy terror represents new heights in GOP ludicrousness.

In the past, it's always been easy to dismiss Jim DeMint as a resident of the extreme right-wing of the Republican Party -- and therefore unrepresentative of mainstream reality. But right now, in a political climate in which Michele Bachmann is considered to have a legitimate shot at winning the Republican nomination for president, it's much harder to find an oasis of complacency from which to watch this madness.