Was John Lennon a secret Reaganite? 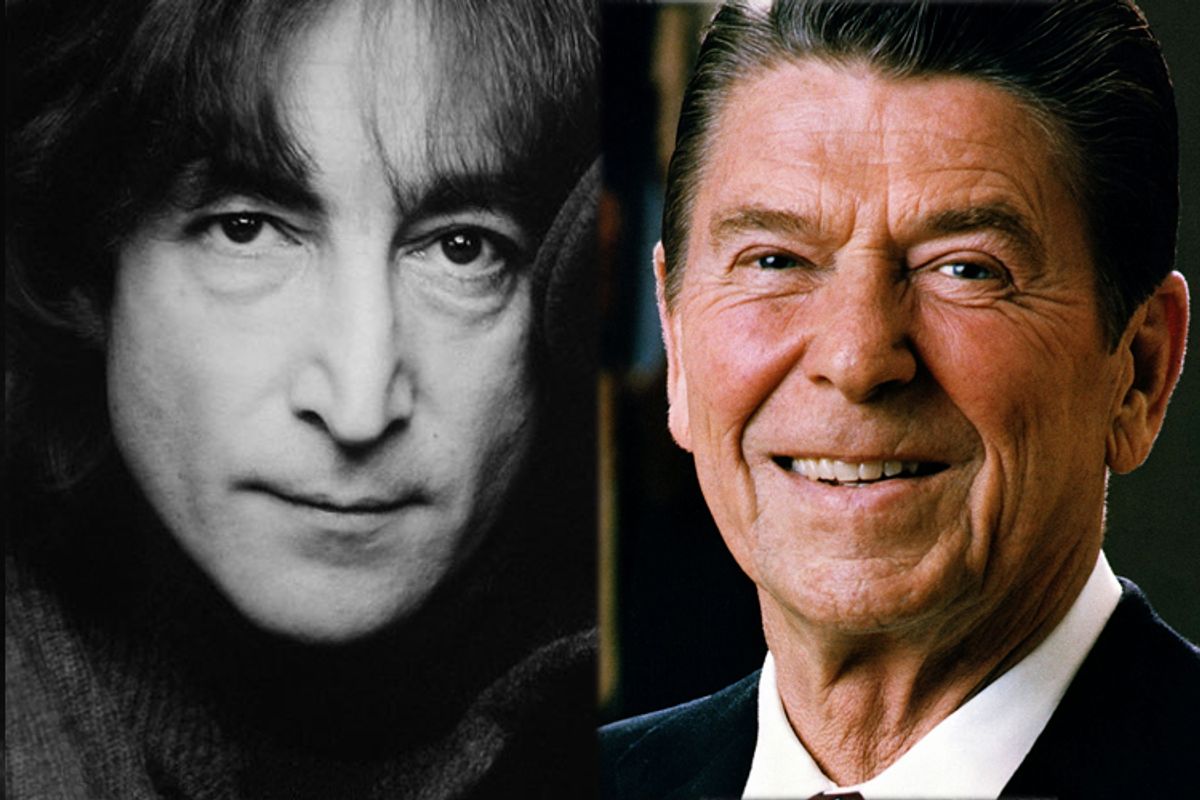 The right-leaning media is aflutter today with the news that, according to a one-time assistant to John Lennon, the rock icon in the final months of his life privately came out as a supporter of Ronald Reagan. But there's strong evidence that, despite the new claim, Lennon never abandoned his left-wing roots.

Here's what we know: The Toronto Sun reported that the assistant, Fred Seaman, is quoted in a new documentary saying that, "John, basically, made it very clear that if he were an American he would vote for Reagan because he was really sour on [Democrat] Jimmy Carter." Seaman added:

"He'd met Reagan back, I think, in the 70s at some sporting event... Reagan was the guy who had ordered the National Guard, I believe, to go after the young (peace) demonstrators in Berkeley, so I think that John maybe forgot about that... He did express support for Reagan, which shocked me.

"I also saw John embark in some really brutal arguments with my uncle, who's an old-time communist... He enjoyed really provoking my uncle... Maybe he was being provocative... but it was pretty obvious to me he had moved away from his earlier radicalism.

This story was promptly picked up by Drudge, Newsmax and Commentary. Andrew Breitbart's Big Hollywood website hailed the claim as evidence that Lennon "might have grown up before his untimely death." A writer at Pajamas Media mourned the loss of a could-have-been conservative icon: "I wish he’d had the courage to come out of the closet. His assassin may have robbed us of more than a great musician."

So what really happened?

First of all, Lennon had indeed met Reagan several years earlier when they were both guests in the Monday Night Football booth, hosted by ABC. Some video from that classic appearance:

In the years before his assassination in December 1980, Lennon had become increasingly apolitical, at least in his public statements and songwriting. He stopped giving interviews to the press in 1975 in favor of life as a "house husband" with Yoko and his young son, Sean. But he reemerged to promote a new album in 1980. The New York Times noted in a September 1980 article that, "The new songs are 'personal,' many of them deal with 'dreams and fantasies;' there isn't a political or topical song in the lot."

But as Lennon biographer Jon Wiener notes today, Lennon was involved in left-wing politics to the very end. In November 1980, he offered a public statement of support to union workers striking for higher wages from the company that made Kikkoman soy sauce:

"We are with you in spirit. . . . In this beautiful country where democracy is the very foundation of its constitution, it is sad that we have to still fight for equal rights and equal pay for the citizens. Boycott it must be, if it is the only way to bring justice and restore the dignity of the constitution for the sake of all citizens of the US and their children."

President Reagan, in contrast, was no fan of strikes or boycotts. Less than a year after Lennon's death, Reagan fired thousands of striking air traffic control workers, dealing a devastating blow to the American labor movement.

Bottom line: It's impossible to say whether Lennon spoke fondly of Reagan, but it seems clear he was never a right-winger.

Finally, here's classic footage of a younger Lennon talking about peace and war:

WAR IS OVER! (If You Want It) from Yoko Ono on Vimeo.