Lessons from the swipe fee war

Regular Americans can still win small legislative victories, as long as they're on the same side as Wal-Mart 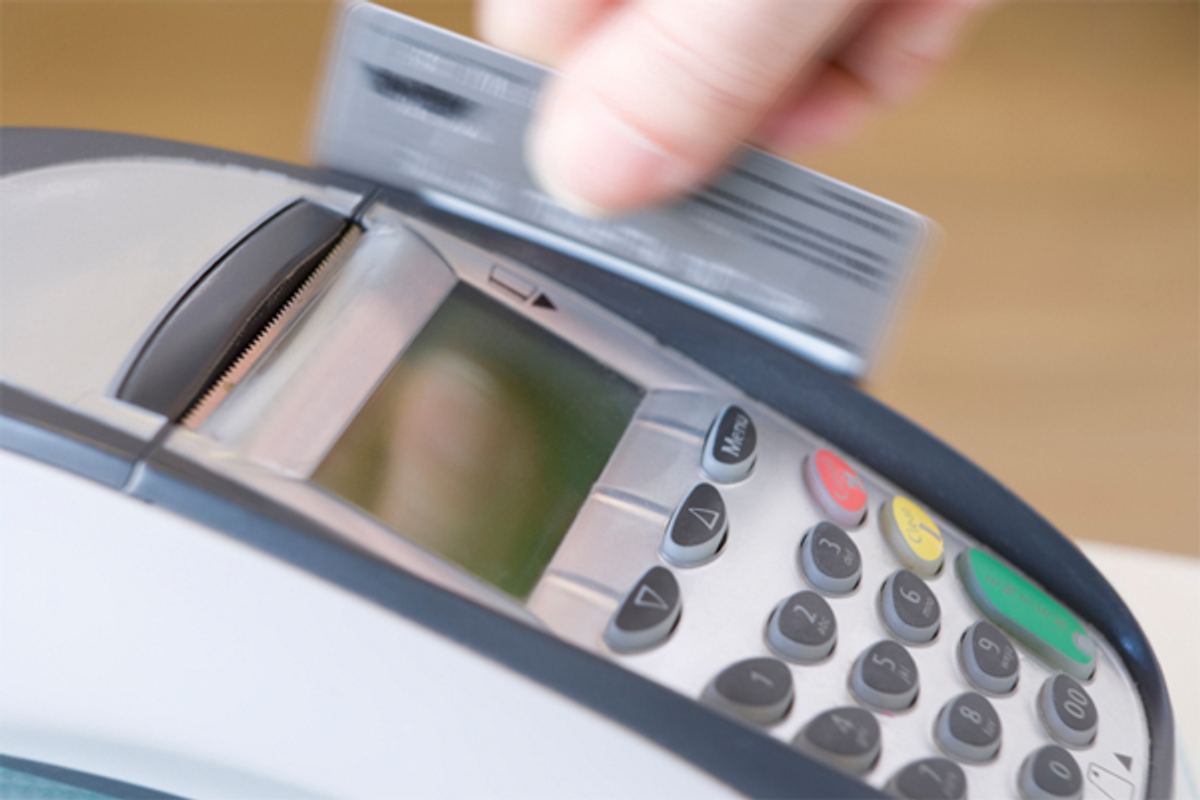 For the average American, the most significant aspect of the recent congressional war over "swipe fees" (i.e. the money merchants pay banks when customers use debit cards) has little to do with the specific issue at hand. After all, while retailers managed to wage what Bloomberg News called a "surprise victorious assault" on the all-powerful banking industry, there's no guarantee swipe-fee savings will be passed onto consumers. In many cases, the fees will simply be pocketed by retailers, with customers seeing no benefit whatsoever. And even the savings that are passed onto consumers will likely be small after the Federal Reserve this week capitulated to Wall Street's demands.

That's not to say the win wasn't at least a potentially modest victory for regular non-rich Americans. If even a few retailers make it slightly less expensive to buy necessities because the banks lost, it's good news. But that brings us to the skirmish's real groundbreaking revelation: The battle proves that consumers in this new Gilded Age can still win small economic concessions from their government, as long as it's not a people-versus-a united Corporate America fight. Indeed, in our money-dominated political system, it's only when Regular America happens to find itself in the middle of a battle dividing Corporate America -- and only if our interests align with a powerful set of corporations -- that we can be heard.

Bloomberg's must-read story about the backroom wrangling over the swipe fees perfectly captures this reality. The piece begins with a standard homage to the old populist democratic ideal, quoting a Regular American cafe owner giddily declaring victory over the Wall Street behemoth. To buttress the faux David-versus-Goliath narrative, the article then quotes Illinois Sen. Dick Durbin (D) pulling an unconvincing "Mr. Smith Goes to Washington" impression by insisting that he's just pushing to end the swipe fees because they "are not fair to small business."

Soon, though, the true story comes out: the one about how the real power behind the push to end swipe fees is not Mom and Pop at the General Store, but some of the biggest multinational retailers in the world -- small-business-eating godzillas like Target, Best Buy, Wal-Mart and Home Depot -- armed with some of the most powerful lobbying firms in Washington.

Bloomberg, not surprisingly, fails to mention this truism: Despite the saccharine rhetoric to the contrary, executives from huge corporation don't altruistically deploy political and financial muscle on behalf of customers -- as is their fiduciary responsibility, they deploy it in search of cold, hard profit for shareholders. But frankly, that fact doesn't have to be explicitly stated -- after a few throwaway lines about "small businesses," the story makes clear that the swipe-fee fight was actually all about "how far the richest interest groups" are willing to "go when a single decision puts billions of dollars up for grabs."

Ultimately, the retail giants marshal campaign contributions and harness populist rhetoric against banks to wage and win a tenacious fight that professional D.C. prognosticators said they would almost certainly lose. This war is so tenacious, in fact, that Durbin describes it as "one of the most heated debates and exchanges that many of us in the Senate have seen in our time."

In that quote, the Illinois Democrat reveals a disturbing truth about economic policymaking. The only "heated" debates over money -- that is, genuine fights rather than staged exercises designed to appease party activists -- are those that pit one set of corporate-backed politicians against another. Otherwise, there's no fight at all.

After all, many of the anti-bank populist arguments that the giant retailers used to win the swipe fee battle had previously been voiced when Congress prepared to authorize the Wall Street bailout of 2008. Even though such populism had more natural traction in the aftermath of the bank collapse than it does today, those same claims were ignored. After all, they were made merely by public interest organizations, grassroots groups and regular Americans -- not by a set of multinational corporations. Just a few years later, the same anti-Wall Street discourse, now backed by millions of corporate dollars, won the day in Congress.

This dynamic defines most legislative issues. For example, the passage of "free" trade deals, which are vehemently opposed by labor unions, consumer groups environmental organizations and most Americans, tends to be slowed only when an influential set of corporations raises an objection (like when the auto industry temporarily stalled the Korea Free Trade Agreement). Likewise, while consumers have long demanded less expensive medications, it was only when large corporations trying to cut costs began advocating for generic drugs that Congress started to seriously consider challenging the pharmaceutical industry's patents. And it is only now that the powerful natural gas industry stands to profit from a national move away from coal that we may finally see minimal legislation promoting a lower-carbon-emission policy.

The list of similar examples is endless, but the paradigm is the same. If change is possible at all right now, it is primarily possible at fleeting moments when the corporate state is divided against itself.

For the most part, that's really depressing. But, as evidenced by the swipe fee fight, at least it leaves open the possibility that those moments still arise every once in a while, and still offer the chance for (albeit marginal) economic victories for working people. If there's a larger organizing strategy to be gleaned from that reality -- and I think there is -- it is that activists should now be aggressively focused on opportunities to exploit, expand and multiply those instances to divide and conquer. Unless there's a much larger structural shift in our politics, those moments represent some of the last small hopes for change.