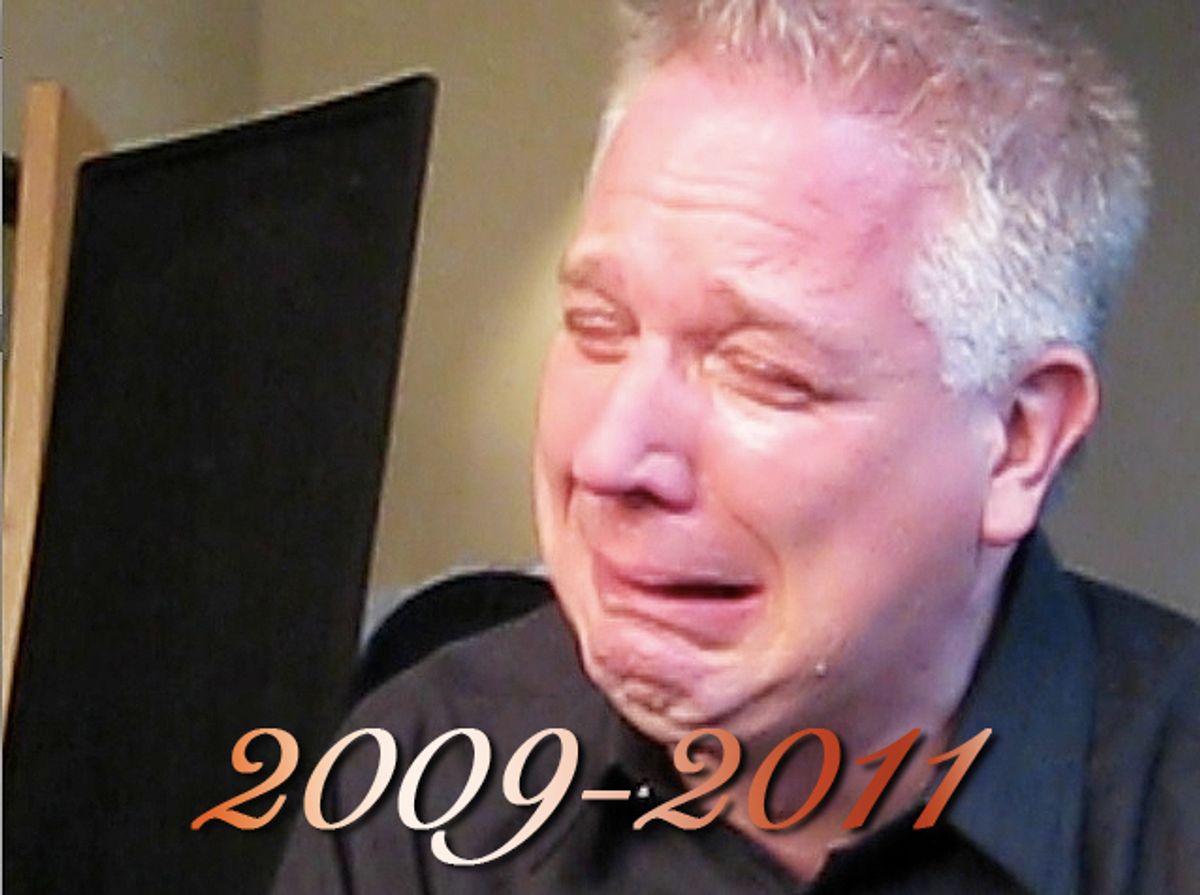 So long, "Glenn Beck Show"! We've had so much fun with you since you began your hysterical, racist campaign against the president and organizations that have black people in them or that are somehow dedicated to helping minorities and underprivileged people as part of a world domination plot devised by Bill Ayers and Saul Alinsky and Woodrow Wilson. But now it's time for your daily hour on cable TV to come to an end. Today will be Beck's last show on Fox News.

Before he went to Fox News, Beck was just a talk radio hack on CNN Headline News with a "funny take" on the news of the day. But on Fox he distinguished himself with unreconstructed full-on John Bircherism, borrowed wholesale from O.G. Bircher Cleon Skousen, modernized with shamelessly racial attacks on contemporary liberal organizations and an obsession with George Soros.

Because his show was so far to the right of the mainstream that it made the rest of Fox's programming look suddenly reserved by comparison, everyone in the lamestream media spent a lot of time putting Beck on the front pages of magazines and helping him to promote his various moneymaking ventures. (The liberal media expounded a great deal of energy on trying to show people just how fringey Beck's entire worldview is, to some success.)

We'll never forget his blackboards and on-screen graphics exposing just how far the great Progressive Conspiracy goes (spoiler: all the way to the top), even though most of us will now go back to not being particularly worried about the modern-day influence of Walter Lippmann.

It was fun when Beck had an incredibly awkward interview with Eric Massa. It was less fun when Beck spent a week unleashing a series of blatantly anti-Semitic attacks on George Soros while also calling him a Nazi. It was the least fun of all when that guy wanted to shoot up the Tides Foundation because Beck basically told him to. But most of all, especially toward the end, it all got a bit ... boring. The audience dropped off. The uprisings and demonstrations in the Middle East had no coherent place in Beck's conspiracies. He got too revival tent and not enough Alex Jones to keep people interested. He seems more interested in being some sort of right-wing Mormon race-baiting lifestyle guru, now, which the world is not really crying out for.

Beck isn't really completely going away, of course, but his new narrow-casting model ensures that only his followers most enamored with his constant operatic self-aggrandizement will pay him much mind going forward. MediaMatters may sign up for a subscription to his new video news service, but I definitely won't.

Not that anyone should mistake the souring of the Fox-Beck relationship as some sort of victory. The worst people at Fox -- the most insidious and vile by far -- are actually more like Steve Doocy and Megyn Kelly, who spew constant streams of deliberate misinformation through resentful sneers in the guise of "news." Those two are probably more responsible for your older Fox-watching relatives constantly repeating idiotic Republican talking points than Beck.