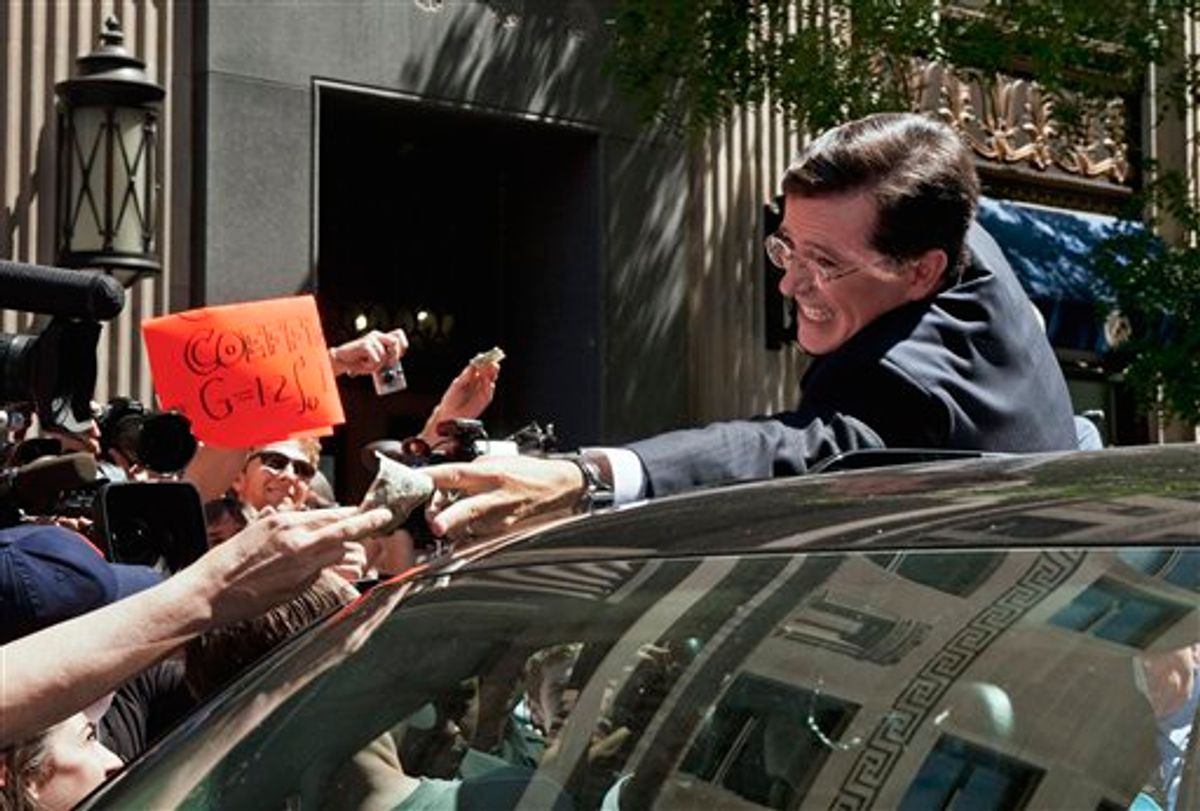 The Federal Election Commission said Thursday that comedian Stephen Colbert can use his TV show's resources to boost his political action committee, but he must disclose some major expenses as in-kind contributions from the show's corporate owners.

Colbert played it straight during his appearance before the commission, letting his attorney do most of the talking while saving his trademark quips for a crowd that gathered outside the commission building after the meeting.

"I don't accept the status quo," he told the crowd, brandishing a portable credit card processing machine. "I do accept Visa, Mastercard or American Express."

Many in the crowd handed Colbert their credit cards or dollar bills as contributions.

Asked what point he was trying to make about corporate America, Colbert did not miss a beat.

Colbert, who plays a conservative TV pundit on "The Colbert Report," is forming Colbert Super PAC, a type of political action committee which will allow him to raise unlimited amounts of money from corporations, unions and individuals. The money will be used to support or oppose candidates in the 2012 elections through independent expenditures such as TV ads.

The FEC decision comes amid a broader erosion of campaign finance regulations in the wake of recent court rulings and with Republicans on the Federal Election Commission and elsewhere pushing for a rollback to give corporations and other wealthy donors stronger sway in financing campaigns.

Colbert had asked the commission for a so-called "media exemption" to allow him to use his show's airtime, staff and other resources for his political action committee without having to publicly disclose them as in-kind contributions from Comedy Central's parent company, Viacom Inc.

Colbert has said those undisclosed contributions could include the use of his show's staff to create TV advertisements about candidates that would air as paid commercials on other shows and networks.

The Colbert ruling eclipsed a lesser-noticed decision by the Federal Election Commission Thursday that could also have a significant impact on the 2012 elections.

The commission said that candidates and party officials may solicit contributions for super PACs, but those contributions could not exceed the $5,000 limit for donations that applies to traditional political action committees.

Some campaign watchdog groups had feared that the commission might permit candidates and party officials to solicit unlimited contributions, opening yet another door to big-ticket donations.

While Colbert delights in lampooning politicians on his Comedy Central show, he raised some serious issues about public disclosure of corporate campaign contributions before the Federal Election Commission.

"Stephen Colbert is a funny man, but he asked a legitimate question and received a serious answer," said Federal Election Commission chair Cynthia Bauerly. "The opinion adopted today does not give him everything he asked for, but it appropriately applies the press exemption consistent with past Commission and court precedent. "

Some campaign finance watchdog groups had warned that a favorable ruling for Colbert could spur many more undisclosed contributions to political figures who are TV hosts or commentators and who could opt to create their own super PACs to take advantage of any new loopholes.

The groups cited politicians such Sarah Palin, Mike Huckabee, Newt Gingrich and Rick Santorum who already have traditional political action committees and are either working now, or have worked, as TV hosts or commentators.

Colbert has said any ads for Colbert Super PAC would not be coordinated with any candidate or party.