Plus: Emergency brakes, wayward turtles and the battle of the rock biographies 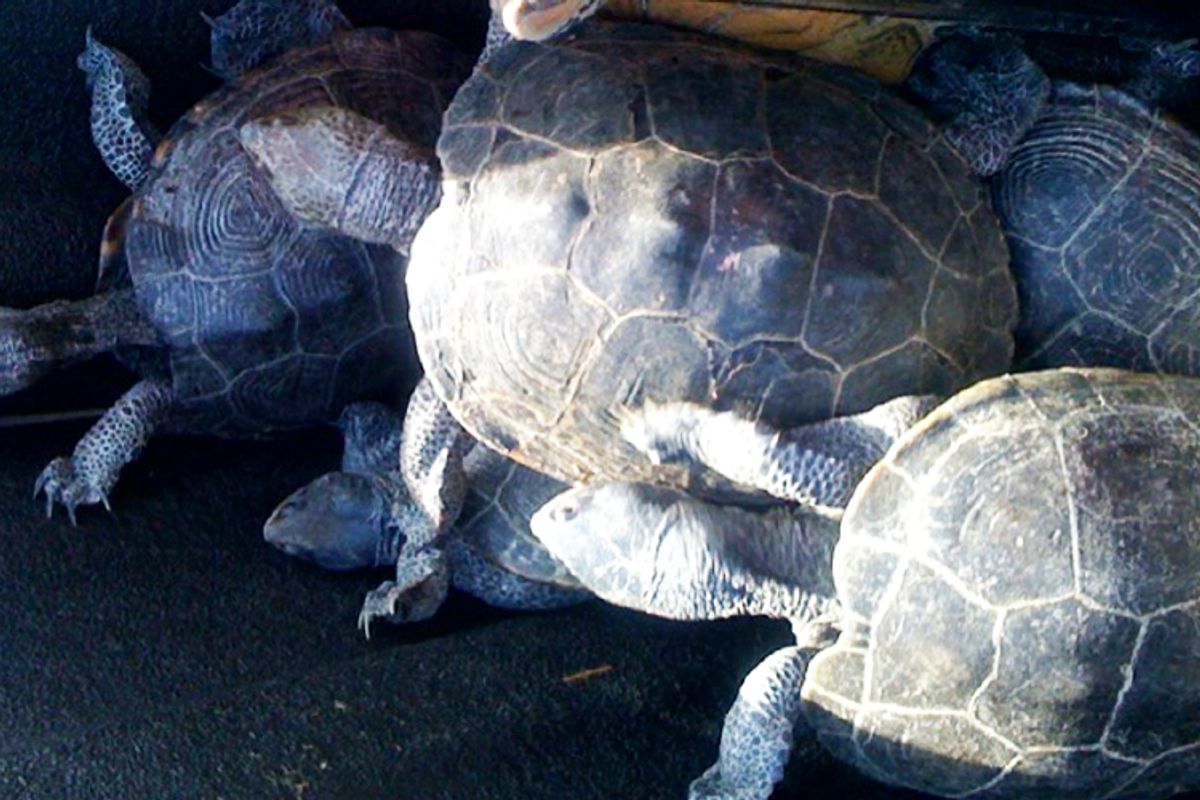 The turtles captured at New York's Kennedy Airport on Wednesday.
--

I live in Chicago and had to be in Reno for a conference. My only options were reverse-direction connections. I flew west from Chicago to Los Angeles, then north from Los Angeles to Reno. Coming back it was backwards again: south from Reno to San Francisco, then eastbound to Chicago. Why did I have to go multiple hours and hundreds of miles out of the way? This doesn't make sense ecologically or customer service-wise.

The problem in this case is that Reno is a small market. To and from such markets, chances are you're going to find nonstops only from an airline's bigger hubs, and once in a while that entails traveling "backward." Maybe this seems wasteful, but it's the best way to consolidate traffic; the airline can feed its Reno service from multiple inbound connections. This is actually less inefficient and less environmentally hostile than offering nonstop service to and from various secondary cities -- even if those cities are in the "right" direction -- using smaller planes. A single mainline jet will consume less fuel and resources than multiple regional planes.

In the moments after the recent "near miss" at Kennedy Airport, in which a Lufthansa plane aborted its takeoff, the Lufthansa crew could be heard talking to air traffic control about the possibility of overheated brakes. The controllers told the pilots that a Port Authority vehicle would be sent out to check the plane's landing gear. Is this really standard procedure? Shouldn't a mechanic or pilot have been the ones checking it out?

All newer jets have brake temperature indicators in the cockpit, and I am sure the Lufthansa crew was monitoring these closely following their discontinued takeoff. Calling out the Port Authority vehicles was just an extra precaution. The plane taxied back to its gate at Terminal One, where it was further checked out by mechanics.

Crews will follow a checklist any time a takeoff is rejected at high speed. The tasks will include consulting a chart that helps determine an adequate brake cooling period. Factors include the plane's weight and the speed at which the abort was initiated. (Rejected, aborted, discontinued: Why are there so many words for the same thing?) The wait time could be an hour or more, depending.

Aircraft tires are fitted with fuse plugs that allow them to automatically deflate should a brake overheat beyond a certain point. This keeps the tires from popping or exploding.

Below around 80 knots (it varies with aircraft type), braking is accomplished manually using foot controls -- similar to the way one brakes in a car. In a high-speed abort, however, initial braking is handled through the auto-brakes. Most auto-brake controls have an "RTO," or rejected takeoff, setting. In the RTO setting, the system automatically arms once the plane exceeds 80 knots or so, and the brakes will then kick in the instant the thrust levers are brought back. The rate of deceleration is very pronounced.

Eighty or a hundred knots is technically within the "high-speed regime," but it's relatively slow compared to a plane's ultimate liftoff speed. A plane will hit 80 only 10 or 15 seconds into its takeoff run. Thus, even a relatively low-speed abort can bring on some pretty hard braking. Should you ever be on a plane when this happens, try not to panic. An abrupt deceleration is not an indication that you're about to smash into something -- it's just the auto-brakes doing their thing.

More on brakes and tires here, and here.

On Navy aircraft carriers, the deck crew form a human line spanning the width of the runway and slowly walk its length, looking for loose objects that could be dangerous to a plane. This would be impractical at a major airport, but I'm curious whether runway debris is a concern among commercial pilots.

Sure it is. The ingestion of a foreign object -- even a small one -- can seriously damage an engine or tire. The fatal crash of an Air France Concorde in 2000 was caused when the plane ran over a metal strip as it neared takeoff speed. A burst tire then punctured a fuel tank resulting in a catastrophic fire.

The "march" you describe on the carrier obviously isn't done at commercial airports, but it's not uncommon for vehicles to perform a runway sweep, checking for debris. If a pilot sees an object on a runway or taxiway, he'll pass a message along to ATC, who will send a car out to snag it. Around apron areas you'll see plastic buckets attached to the jet bridges. The buckets are marked with the letters "FOD" (rhymes with "cod"), a well-known aviation acronym that stands for "foreign object damage" or "foreign object/debris." During my preflight walk-around checks I'll often pick up luggage locks, pens and various other flotsam and jetsam, and toss them in the FOD bucket.

It was apparently some FOD that caused the compressor stalls that interrupted my non-daredevil F-4 Phantom ride a few years back.

I'm uncertain if damage caused by wildlife is considered FOD or not. Bird strikes, for instance. Or turtles.

That's right, on Tuesday morning one of the runways at New York's JFK airport had to be closed because of migrating turtles. Over a hundred diamondback terrapins, apparently searching for nesting sites, wandered onto the tarmac of Runway 04L, causing flight delays of up to a half-hour.

Believe it or not this is a semi-regular occurrence at Kennedy. The airport's southern side abuts the Jamaica Bay Wildlife Refuge, a federally protected, 9,000-acre section of the Gateway National Recreation Area. Runway 04L/22R is the same runway along which, about a year ago, I saw an osprey whizzing past our aircraft with a fish clutched in its talons. I've seen pelicans out there as well, and once nearly landed a 757 on top of a rabbit.

I'm an animal lover, but we weren't gonna break off the landing, eight seconds from touchdown, for the sake of a wayward bunny.

I'm pretty sure he scampered clear. But it was close.

Happy Fourth of July. I'll be spending it on a layover in lovely Manchester, England. (The holiday allows me to score my first international trip in some time.)

How about a free baseball cap to the first person to identify which outstanding song contains the line: "Some rare delight, in Manchester town..."

Wait, that's too easy. You only get the freebie if you're a true fan of that band (I'll know) and you promise to wear the hat.

Speaking of music, I finally received my copy of "See a Little Light," the Bob Mould biography/autobiography, written with Michael Azerrad.

The photo of Mould on the cover is hilarious -- he could be Pete Townshend or an Oregon logger. It's fair to say that Mould is one of the few rockers who actually look better at 50 than they did at 25. Still, and undoubtedly to his chagrin, the Bob I've always loved is the big and boozy one, circa 1985, sweaty and hoarse, with his Ibanez Flying-V and that "Cage Match" sweat shirt he always wore onstage.

In my post the other day I alluded to Azerrad's book as a de facto Hüsker Dü biography. I probably shouldn't have done that, since it isn't fair to a writer named Andrew Earles, who wrote what is, in fact, the full and to this date definitive Hüsker Dü biography.

Earles' book, published in 2010, is called "Hüsker Dü: The Story of the Noise-Pop Pioneers Who Launched Modern Rock."

I'll take the "launched modern rock part," whatever that means, exactly, but I'm not sure how I feel about "noise-pop."

Azerrad and Earles both are devoted fans, it's obvious. But they haven't got one of these...