The Greek streets once again erupted over austerity. How much do the actual streets have to do with it? 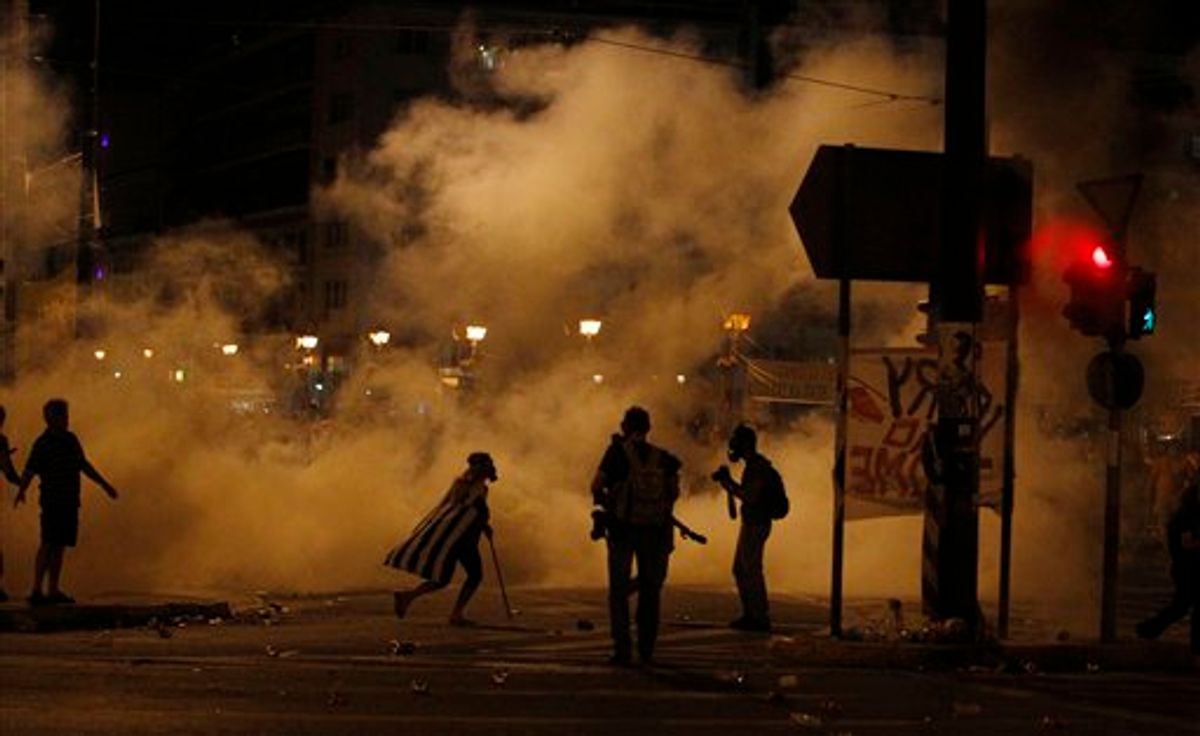 A protester covers himself with a Greek flag, as he runs through tear gas during clashes outside the Greek Parliament in Athens, early Wednesday, June 22, 2011. The Greek prime minister survived a crucial confidence vote early Wednesday, keeping alive a government dedicated to averting a debt default that could spark a financial maelstrom around the world. (AP Photo/Thanassis Stavrakis) (AP)
--

This week the Greek parliament voted through the harshest austerity measures to date -- a condition of another IMF/EU bailout aimed to avoid bankruptcy. In response, the Athens streets erupted in riots, tear gas filled Syntagma Square, the site of the parliament building; burning trash cans littered the streets and the ground floor of the finance ministry was set alight.

Clashes with Greek police, clad in riot gear, have been a consistent fixture in Athens (with waxing and waning intensity) since 2008 when 15-year-old Alexis Grigoropoulos was shot dead by the police. Although the city has a much longer history of popular resistance and occupation of popular space.

Numerous reasons account for the relentlessness with which the Greek resistance movement has stayed strong: Palpable anger at the damage austerity measures have wreaked on the lives of many Greeks (unemployment for young people up to the age of 25, for example, is nearly 45 percent) is of course paramount, as is the growing rage at the Greek police's violent repression of protest. Among other reasons: geography.

Urban space in Athens -- street sizes; the proximity of protest epicenters to the parliament; the role of centrally located universities -- provides the perfect storm for ongoing civil unrest, which continues to evade the control of an increasingly draconian police force. "In terms of urban planning and zoning, Athens is a pure failure," write Vaso Makrygianni and Haris Tsavdaroglu in a spatial analysis of Athens included in a new book "Revolt and Crisis in Greece," from the Occupied London collective. The implication is this: Where urban planning fails the authorities, it is a boon for their dissenters.

The streets of Exarcheia: Although Syntagma Square, which has been likened to a mini-Tahrir, has been the epicenter of recent anti-austerity mass protests, the small and winding streets of nearby Exarcheia, a bohemian neighborhood in the heart of Athens, has provided fertile ground for the antagonist movement. Aside from a strong anarchist community and other neighbors sympathetic to the Greek dissenters, factors as ostensibly banal as the frequency of street intersections rendered the area conducive to ongoing civil unrest.

"Physical and geometrical characteristics of urban space" directly relate to important factors in street protests, "such as visibility, ambushes or the ability to communicate," write Makrygianni and Tsavdaroglu. They note that, "for example, the streets in 'unruly' Exarcheia intersect every 45 meters, while in the bourgeois neighborhoods of the northern suburbs, junctions occur every 220 meters."

The frequent intersections and alleys of Exarcheia, although often the sites of violent clashes with Athens police, provide escape routes for protesters, who would be more easily rounded up and detained in wider streets.

A historical point of comparison might be Paris and its 19th Century redesign. Napoleon III commissioned a redesign of the city, orchestrated by Baron Georges-Eugène Haussmann. One aspect of the urban planning involved the widening of Paris' thoroughfares, a move that Napoleon III’s contemporary (and later) critics claimed was an authoritarian plan to allow for troops to move through the city and round up protests. As the celebrated German philosopher Walter Benjamin wrote, "the true goal of Haussmann’s projects was to secure the city against civil war’ by ‘widening the streets’ in order to ‘make the erection of barricades in the streets of Paris impossible."

Benjamin's reading -- that authoritarian aims underpinned Haussmann's plans -- has been criticized by historians. But regardless of intentions, Paris' broad boulevards leading toward the city center were understood to be useful for controlling unrest. It is interesting to note that recent riots in Paris in 2005 found their locus in the city's outskirts -- the low-income banlieues -- far from Haussmann's wide thoroughfares.

Proximity to the center: Unlike 2005 in Paris, the action in Greece is focused in the heart of Athens, with tear gas regularly creeping up the step of the parliament building itself. Makrygianni and Tsavdaroglu compare the positioning of Exarcheia to the site of riots in Los Angeles to illustrate how proximity to the city center might help sustain long-term protests:

[The 1965 Watts Riots] lasted for five days, the rebellion took place 22km away from the city center. The urban parts where it took place were migrant areas of residential use, where the narrowest streets are 20 - 25 meters wide and avenues are up to 70 - 80 meters. The revolt of 1992 took place in South Central Los Angeles, again in residential migrant neighborhoods and with the distance from the city's financial and commercial center exceeding 10km. Despite its extremely violent characteristics the revolt wall quelled within six days.

The Greek protests cannot be isolated and ignored by the country's beleaguered parliament -- not when the antagonist movement so often visibly surrounds the central government buildings. On Monday, a group of communist protesters stormed the Acropolis, which overlooks Athens, and draped the ancient site in banners reading, "The people have the power and never surrender. Organize – Counter attack." Greece's "indignants" occupy historical and political sites and as such cannot be sidelined by a media looking the country.

The Universities: Two universities sit on the the outskirts of Exarcheia, close to Syntagma square and the parliament. They too have played a crucial role in providing a safe space for protest planning and radical ideas to be shared, which owes to a particularity of Greek history. In 1973, an uprising took place out of Athens' Polytechnic University in protest of the U.S.-backed military junta then in power. Tanks were sent in to quell the revolt and 40 civilians were killed. Following this a constitutional provision was passed that would not allow police and armed forces to enter university grounds. Although very occasionally overruled by parliament, the universities continue to serve as a "safe space" for protesters right in the heart of the city.

Control: Cities are not, on the whole, specifically designed to control protests. Tali Hatuka, head of the Laboratory for Contemporary Urban Design at Tel Aviv University, who specializes in urban space and civil unrest, told Salon:

I do not think that governments think about cities through controlling protests. Yet, cities were always planned, taking into consideration the issue of control as a whole (i.e., management of the city, security/invasions) ... In addition, leaders always wanted to erect symbolic representations of their power through building monuments, constructing wide streets for marches, etc. Thus, control and monumentality are ancient phenomena. And this is what protesters are trying to do in the act of protest, challenging both control and monumentality.

Greece's antagonist movement has used Athens to its advantage: evading police control in the streets and visually occupying Greece's most recognizable monuments and sites for its own purposes.

The video below, courtesy of Russia Today via YouTube, offers a glimpse of the most recent clashes in Athens between the indignants and the police: