Whatever happened to that war with Iran?

Last year, Jeffrey Goldberg sounded the alarm about an Israeli attack on Iran by July 2011. What happened? 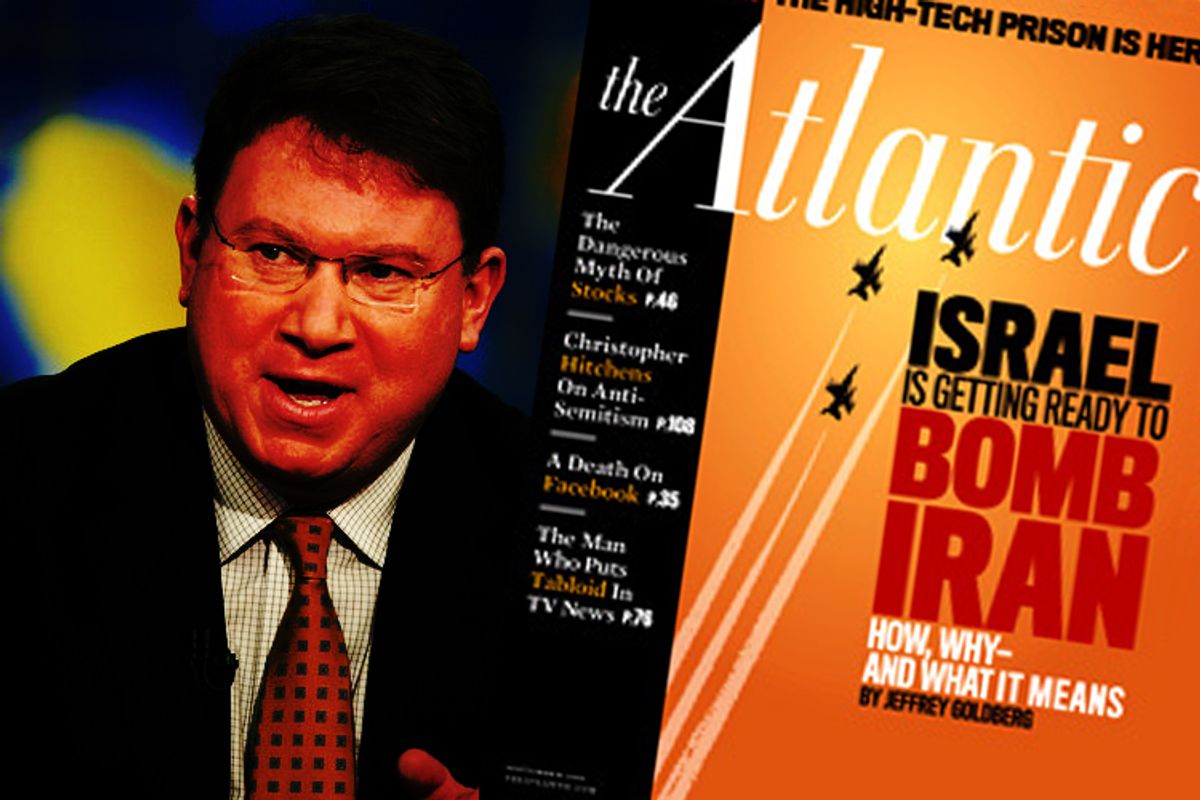 Last August, the Atlantic published a splashy cover story by Jeffrey Goldberg that led with a startling prediction: Israel would more likely than not launch bombing raids on Iran's nuclear sites by July 2011, according to Goldberg's mostly Israeli (and unnamed) sources.

Today is July 1, and there has, of course, been no attack. It's worth looking back at the influential piece and considering what happened. Wrote Goldberg:

[A] consensus emerged that there is a better than 50 percent chance that Israel will launch a strike by next July. (Of course, it is in the Israeli interest to let it be known that the country is considering military action, if for no other reason than to concentrate the attention of the Obama administration. But I tested the consensus by speaking to multiple sources both in and out of government, and of different political parties. Citing the extraordinary sensitivity of the subject, most spoke only reluctantly, and on condition of anonymity. They were not part of some public-relations campaign.)

The piece, packaged with a provocative cover image and headline ("ISRAEL IS GETTING READY TO BOMB IRAN") was the subject of intense debate when it came out. Glenn Greenwald here at Salon accused Goldberg of feigning "'ambivalence' about whether Iran should be bombed ... while infecting the discourse with the kinds of factual falsehoods documented here, all in service of skewing the debate towards ensuring an attack happens." Others like Clive Crook hailed the piece as "an amazing intellectual coup."

A common critique of the piece was precisely what Goldberg tried to preemptively address in the excerpt above: that his Israeli sources, with the protection of anonymity, were overstating the possibility and imminence of an Israeli strike in order to persuade Washington to more aggressively pressure Iran, or even launch its own attack. As Ben Smith wrote at the time, the "unstated logic here [is] that, if Israel is going to bomb Iran, the U.S. might as well do it itself." That critique seems to have been strengthened by the fact that the central prediction of the article didn't pan out.

Reached by phone at the Aspen Ideas Festival, Goldberg told me that he believes the article captured the "high level of anxiety" about Iran he encountered during a month reporting in Israel last summer.

"We wrestled with how to frame it and decided to frame it in a way that would drive concentrated attention to what we thought was a serious and urgent problem," he said. "I would point out that by saying there's a greater than 50 percent chance, we were still suggesting there's a 40-plus percent chance it wouldn't happen."

Goldberg also pointed to several "interesting" developments after the publication of his story: revelations about the Stuxnet worm dealing a blow to Iran's nuclear program; a series of high-profile statements by former Mossad chief Meir Dagan opposing a strike on Iran as "stupid;" and communications between American officials and their Israeli counterparts that Goldberg said were prompted by his Atlantic story. He said that Obama officials reached out to the Israelis to reassure them that "we've got this" -- but Goldberg added he's not sure how much stock to put in those communications.

I asked Goldberg about the argument that his Israeli sources were hyping the possibility of an attack in order to ratchet up pressure on the Obama administration. "I talked to a lot of people I've known for a long time, and I did not sense that this was a campaign," he said. "There was no campaign organized to get me to say x, y or z."

Goldberg still believes that in certain circumstances the current Israeli government would attack Iran's nuclear sites. "Meir Dagan is doing what he's doing now because he's scared of an Israeli attack," he said. "If you don't think Bibi Netanyahu is crazy enough to launch an attack on Iran, you don't understand this prime minister."

One other thing: Atlantic Editor James Bennet is standing by the story, sending over this statement:

"I’m proud of the story, and I think it holds up very well. We didn’t anticipate Stuxnet specifically, but we did emphasize that changing circumstances could affect the timeline we described in the piece. The story succeeded in provoking a tremendous amount of debate about one of the biggest foreign policy questions of our time, and nine months after we published it, it remains the definitive article on the complex strategic thinking here and abroad about Iran’s nuclear program."