Chavez reveals he is fighting cancer after surgery 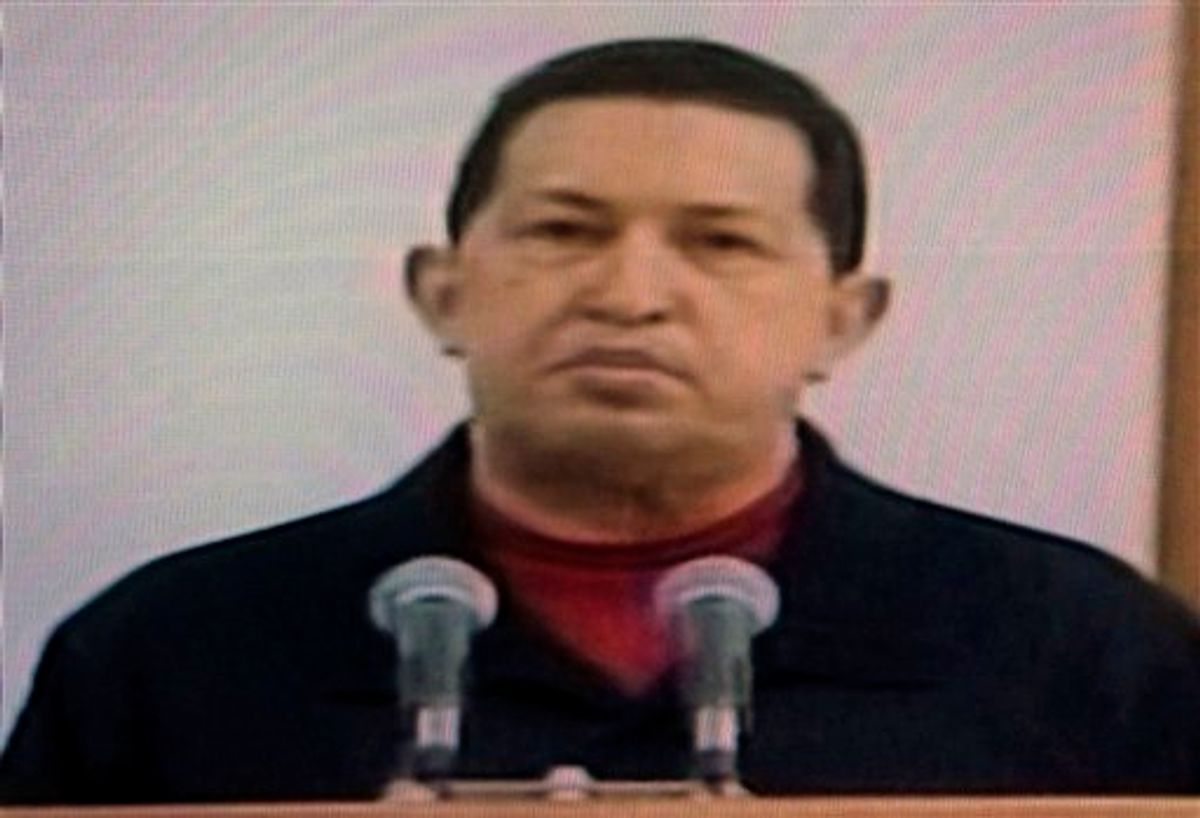 In this frame grab taken from Venezolana de Television, VTV, Venezuela's President Hugo Chavez delivers a televised speech aired from Cuba, Thursday, June 30, 2011. Chavez said he underwent a second surgery in Cuba that removed a cancerous tumor. It was unclear when and where the message was recorded. (AP Photo/Ariana Cubillos) (AP)
--

Venezuelan President Hugo Chavez revealed that he is fighting cancer after having a tumor removed in Cuba, raising uncertainty about Venezuela's political future even as he assured his country he expects to fully recover.

Chavez was noticeably thinner and paler as he appeared on television Thursday night, reading from a prepared speech with a serious and at times sad expression. He said he is resolved to "be victorious in this new battle that life has placed before us."

Chavez's admission shook the political landscape of a country he has dominated for his more than 12 years in power, and who had vowed to win re-election next year and govern for another decade or more.

There is no obvious successor to the charismatic Chavez within his Bolivarian movement, and his illness may also affect his leadership within the ALBA alliance of leftist Latin American nations.

Chavez said he had two operations in Cuba, including one that removed a tumor in which there were "cancerous cells." The 56-year-old president said the surgery was performed after an initial operation nearly three weeks ago to remove a pelvic abscess.

"President Chavez will continue because he hasn't truly stopped exercising his functions as president," Rangel Silva said on state television. He said Chavez was recovering smoothly and had been on top of his duties while in Cuba.

"He will be in our country soon," Rangel said, without saying exactly when Chavez was expected to return.

Chavez said the tumor was in the pelvic region but didn't say exactly where or what type of cancer was involved. He said he is continuing to receive treatment in Cuba but did not elaborate.

He said it was a mistake not have taken better care of his health through medical checkups.

"What a fundamental error," he said at a podium, flanked by the Venezuelan flag and a portrait of 19th-century independence hero Simon Bolivar, the namesake of his Bolivarian Revolution political movement.

Expressing confidence that he will continue to get better, Chavez said: "I invite you all to continue climbing new summits together."

Chavez didn't say how much longer he expects to remain in Cuba recovering, and there was no information on when or where his message was recorded.

His appearance came after days of anxious speculation among Venezuelans about Chavez's health. State television on Tuesday had shown photos and video of Chavez chatting animatedly with Fidel Castro, but officials had been vague about the reasons for Chavez's continued seclusion in Cuba.

Citing Chavez's health, the government announced Wednesday that it was canceling a two-day summit of Latin American leaders that Chavez would have hosted next week on the 200th anniversary of Venezuela's declaration of independence from Spain.

Chavez's revelation, and the lack of any return date, is likely to further generate speculation in Venezuela about which of the president's allies could potentially take his place if necessary. Vice President Elias Jaua has led government events in Chavez's absence, and the leftist president's elder brother, Adan, recently stepped up his public profile by rallying supporters at a weekend prayer meeting for Chavez's health.

Chavez supporters gathered in Plaza Bolivar in downtown Caracas late Thursday chanting before television cameras: "Chavez, friend, the people are with you!"

There was no immediate reaction from the main opposition coalition, which earlier had demanded that the government provide details about Chavez's condition.

Chavez said his first surgery took place June 11 for a "strange formation in the pelvic region that required an emergency operation due to the imminent risk of a generalized infection."

He said when he arrived in Cuba after visits to Brazil and Ecuador, he had intended to have a simple checkup for a knee injury that had forced him to use a cane in recent weeks. But he said Castro had questioned him "like a doctor" and that tests confirmed the need for urgent surgery.

After that initial operation, Chavez said, doctors began to suspect other problems, and Castro gave him the news of the tumor. A series of tests "confirmed the presence of an abscessed tumor with the presence of cancerous cells, which made necessary a second operation that allowed for the complete extraction of the tumor," Chavez said.

He didn't say when the second operation was performed.

Chavez said his condition has been "evolving satisfactorily while I receive a complementary treatment to combat the different types of cells found, and thereby continue on the path to my complete recovery."

After Chavez's speech, the vice president appeared on television at the presidential palace, calling for support and unity among Venezuelans.

"There is no time for sadness, but rather for courage and for work," Jaua said. "Unity is what's needed at this time."

Under Venezuela's constitution, the vice president would take the president's place during "temporary" absences of up to 90 days. And Jaua would serve the remainder of Chavez's six-year term if the socialism-preaching president were to die or resign.

With a presidential election looming next year, it's unclear who might step forward to run in Chavez's place if the president were to pull out of the race.

During the past few weeks, Chavez has largely remained out of sight, and some of his opponents had accused the government of maintaining secrecy about his ailment.

Chavez last spoke publicly in a call to Venezuelan television on June 12, after his first surgery.

Some opposition politicians had called for the president to temporarily cede his duties to the vice president while recovering in Cuba.

Chavez's allies, however, insisted he remained firmly in control of government affairs, even as he has been recovering.

The leftist leader has been in office for more than 12 years and plans to run for re-election in 2012. He did not address that issue on Thursday.

Venezuelan pollster and analyst Luis Vicente Leon said on Twitter that Chavez will likely enjoy an initial boost in his approval ratings due to public sympathy, but that "the political risks for Chavez are notably amplified" due to his condition.

In videos released Wednesday, Chavez smiled and discussed Latin American history and his days as an army paratrooper with Castro. Two of Chavez's daughters and a granddaughter joined in the encounter.

Finishing his speech Thursday, Chavez recited a revolutionary slogan often used by Castro: "Forever onward toward victory! We will be victorious!"

Before finishing, he added: "Until my return!"

After his appearance, some of his closest allies went on state television. National Assembly president Fernando Soto Rojas, who days earlier had denied rumors that Chavez was diagnosed with cancer, said the president is in good hands in Cuba.

"We wish for him to get better soon! Onward, commander!"