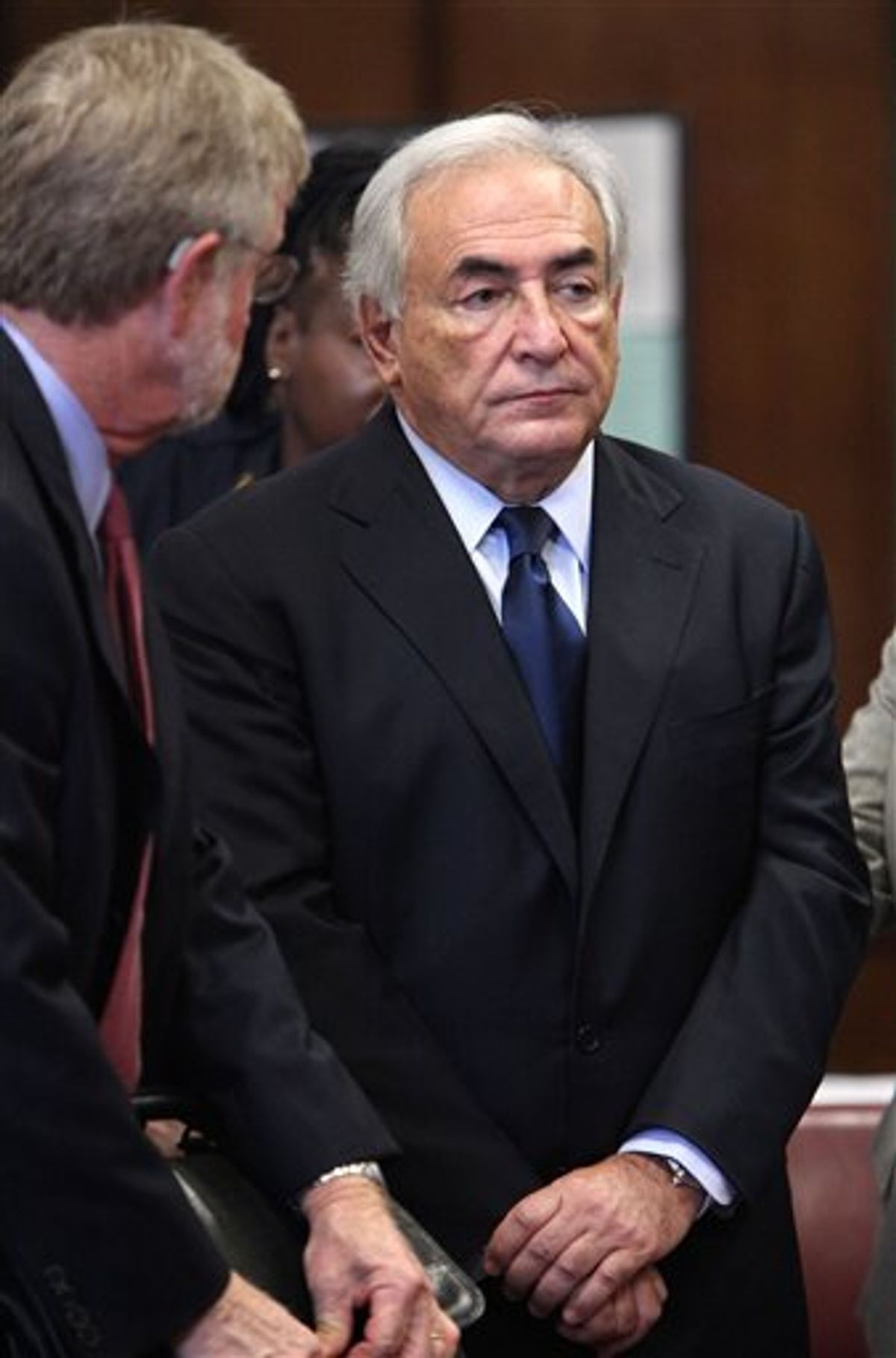 Prosecutors have serious questions about the credibility of a hotel housekeeper who has accused former International Monetary Fund leader Dominique Strauss-Kahn of sexual assault, and he is expected to have his strict bail conditions reduced today, according to people familiar with the case.

Investigators have come to believe that the woman lied about some of her activities in the hours around the alleged attack and about her own background, a law enforcement official told The Associated Press on Thursday. The official is familiar with the case but spoke on condition of anonymity to discuss matters not yet made public in court.

Prosecutors think she lied about details on her application for asylum in the U.S., including saying she had been raped in her native Guinea, the official told the AP.

"She actually recounted the entire story to prosecutors and later said it was false," the official said.

Prosecutors haven't necessarily reached a new conclusion about the allegations against Strauss-Kahn and have not decided whether to downgrade the charges, the official said.

A court hearing is set Friday for the 62-year-old Strauss-Kahn, who is accused of crimes including attempted rape has been under armed guard in a Manhattan town house after posting a total of $6 million in cash bail and bond. He denies the allegations.

Another person familiar with the case but not authorized to speak publicly about it said earlier Thursday that Strauss-Kahn may get his bail and house arrest arrangement eased at Friday's hearing but would not elaborate. Strauss-Kahn lawyer William W. Taylor would say only that the hearing was to review the bail plan. The Manhattan district attorney's office declined to comment.

A third person who spoke on condition of anonymity told the AP that prosecutors have raised issues about the accuser's credibility in the case against Strauss-Kahn, but also would not elaborate.

The New York Police Department, which investigated the case, declined to comment. The woman's lawyer did not immediately return a telephone call seeking comment.

"There will be serious issues raised by the district attorney's office and us concerning the credibility of the complaining witness," Benjamin Brafman, a lawyer for Strauss-Kahn, told The Wall Street Journal.

The maid told police that Strauss-Kahn chased her down a hallway in his $3,000-a-night suite in New York's Sofitel hotel, tried to pull down her pantyhose and forced her to perform oral sex before she broke free.

If the case collapses, it could once again shake up the race for the French presidency. Strauss-Kahn, a prominent Socialist, had been seen as a leading potential challenger to conservative President Nicolas Sarkozy in next year's elections -- until the New York hotel allegations embarrassed Strauss-Kahn's party and led to his resignation from the IMF.

"Those who know Dominique Strauss-Kahn will not be surprised by this evolution of events," one of his French lawyers, Leon Lef Forster, told the AP in Paris. "What he was accused of has no relation to his personality. It was something that was not credible."

New doubts about Strauss-Kahn's accuser would also revive speculation of a conspiracy against Strauss-Kahn aimed at torpedoing his presidential chances. Within days of his arrest, a poll suggested that a majority of French think Strauss-Kahn -- who long had a reputation as a womanizer and was nicknamed "the great seducer" -- was the victim of a plot.

Socialist Party chief Martine Aubry announced her own presidential bid this week, after having long been expected to throw her weight behind a Strauss-Kahn candidacy. French politician Michele Sabban said Friday that the Socialists should suspend the presidential primary calendar because of the new developments.

The New York Times first reported on its website that investigators uncovered major inconsistences in the woman's account of her background, citing two law enforcement officials. The Times also reported that senior prosecutors and Strauss-Kahn's lawyers are discussing whether to dismiss the felony charges, including attempted rape.

Prosecutors had argued against his release in May, citing the violent nature of the alleged offenses and saying his wealth and international connections would make it easy for him to flee.

"The proof against him is substantial. It is continuing to grow every day as the investigation continues," Assistant District Attorney John "Artie" McConnell told the judge. "We have a man who, by his own conduct in this case, has shown a propensity for impulsive criminal conduct."

In early hearings, prosecutors underscored that they thought the evidence against Strauss-Kahn was formidable. And it appeared so at first, the law enforcement official told the AP.

"In the beginning, it was a strong case. There was a victim and several witnesses and forensic evidence that supported the victim's claim," the official said.

The woman was in Strauss-Kahn's room only briefly before the alleged attack, his semen was found on her uniform, and she quickly reported the alleged assault and told a consistent story about it to investigators and prosecutors, the official said.

Prosecutors have said in court that Strauss-Kahn appeared on surveillance tapes to be in a hurry as he left the hotel, though his lawyers have said he was merely rushing to lunch.

Strauss-Kahn was in New York on a personal trip when the maid made her accusations. During initial bail hearings, prosecutors noted that he was arrested on a Paris-bound plane at Kennedy Airport, and that they could not compel his return from France if he fled.

His lawyers have underscored that it was a long-planned flight and have said he wants to return to court to clear his name.

Defense lawyers have said that the hotel encounter wasn't forcible, and that they have unreleased information that could "gravely undermine the credibility" of the housekeeper. The defense was using private investigators to aggressively check out the victim's background and her story, but the Times reported that it was investigators for the prosecution who uncovered discrepancies.

The woman's lawyer has said she is prepared to testify despite a "smear campaign" against her. The Associated Press generally does not identify accusers in sex crime cases unless they agree to it.

Strauss-Kahn was held without bail for nearly a week after his May arrest. His lawyers ultimately persuaded a judge to release him by agreeing to extensive -- and expensive -- conditions, including an ankle monitor, surveillance cameras and armed guards. He can leave for only for court, weekly religious services and visits to doctors and his lawyers, and prosecutors must be notified at least six hours before he goes anywhere.

The security measures were estimated to cost him about $200,000 a month, on top of the $50,000-a-month rent on a town house in trendy TriBeCa. He settled there after a hasty and fraught house hunt: A plan to rent an apartment in a tony building on Manhattan's Upper East Side fell through after residents complained about the hubbub created by reporters, police and gawkers.

Under New York law, judges base bail decisions on factors including defendants' characters, financial resources and criminal records, as well as the strength of the case against them -- all intended to help gauge how likely they are to flee if released.

Defendants and prosecutors can raise the issue of bail at any point in a case. It's common, if asking a judge to revisit a bail decision, to argue that new information or new proposed conditions change how one or more of the factors should be viewed.