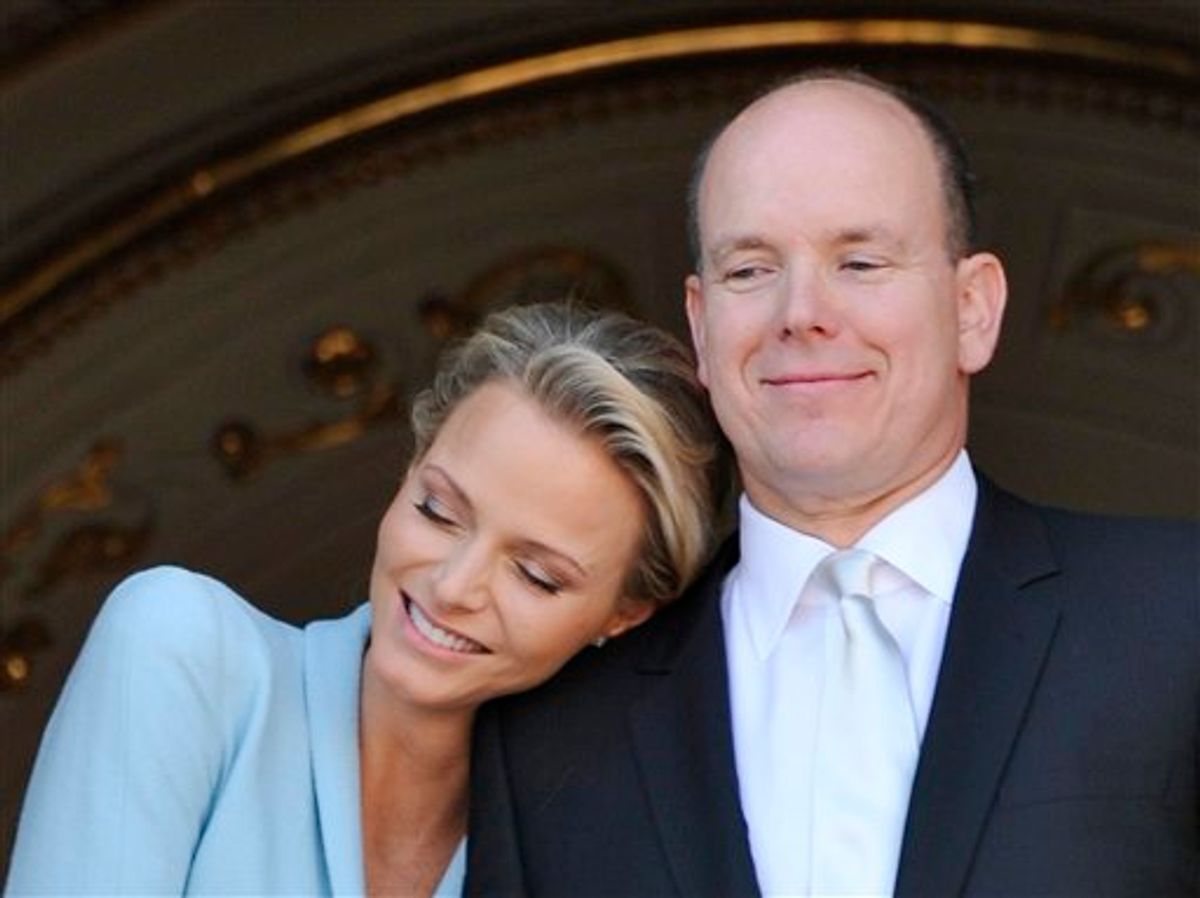 A day after the civil wedding that transformed one-time Olympic swimmer Charlene Wittstock into the Princess of Monaco, she and Prince Albert II wed in a star-studded religious ceremony Saturday.

The couple exchanged 18 carat white gold platinum rings by Cartier. As Albert slipped the ring onto her finger, he winked, and as she put his on, she burst out into a broad smile.

The bride appeared to tear up behind the veil as the South African took her place at the altar inside the princely palace where the Catholic ceremony was taking place. Charlene wore an off-the-shoulder gown by Giorgio Armani, and a long veil.

Photographers shouted at Czech supermodel Karolina Kurkova, dressed in a sober navy skirt suit, to strike a pose, and the crowd of thousands of the principality's citizens following the festivities on giant screens just outside the palace broke into cheers as French musician Jean Michelle Jarre swept by.

Ducasse, who like many in his tax bracket has taken citizenship in Monaco, is the first chef to earn three Michelin stars in three different cities, including three for his Louis XV restaurant in Monaco. He has said freshly caught fish and vegetables grown on Albert's farm will be on the menu. A fireworks extravaganza will follow.

The couple was married in an intimate civil service on Friday inside the prince's palace. Albert's sisters, Princesses Caroline and Stephanie, were among several dozen guests at Friday's ceremony, which was held in the palace's sumptuous throne room where the prince's father, the late Rainier III, wed Hollywood legend Grace Kelly in 1956.

The blond beauty died in a car crash nearly 30 years ago, and this tiny principality on the Riviera had been without a princess ever since. Known as a notorious ladies man, 53-year-old Albert long eschewed marriage, and many in Monaco had resigned themselves to forever having a bachelor prince.

The constitution was even modified to ensure the continuity of the Grimaldi line, one of Europe's oldest dynasties, in case Albert never produced an heir. The prince acknowledged having fathered two children out of wedlock, but only his legitimate offspring would be able to succeed him. Rumors have swirled in recent days that a third illegitimate child had surfaced -- prompting Charlene to allegedly try to call off the wedding and return to South Africa days before the festivities.

The palace has denied the reports, dismissing them as "ugly rumors" prompted by spite and jealousy.

Charlene, 33, has told interviewers she would like to have children.

Only Monaco's fewer than 8,000 citizens and their partners were allowed access to the Rocher, the rocky promontory presided over by the palace, to follow Saturday's service on two giant screens.

Several thousand residents came out for the civil ceremony a day earlier, many of them sporting dark suits or evening gowns and heels despite the scorching temperatures.

One of the attendees, 72-year-old Marie Malghreli, was still glowing from her family's brush with royalty.

"My husband last night touched the prince's hand and then the princess touched my husband's hand -- my husband was touched -- and I was standing next to him and I was jealous," she said. "She is really pretty, she's delicious."

Charlene was wearing a blue, ankle-length ensemble press handlers said was designed by the princess herself.

On Saturday, Charlene will wear one of her favorite labels, Armani, though the design of the dress has been kept under wraps.

For the Sunday brunch that will cap the days-long wedding festivities in Monaco, known as a magnet for the rich and famous, the princess is expected to wear Chanel's cross-town rival, Christian Dior.