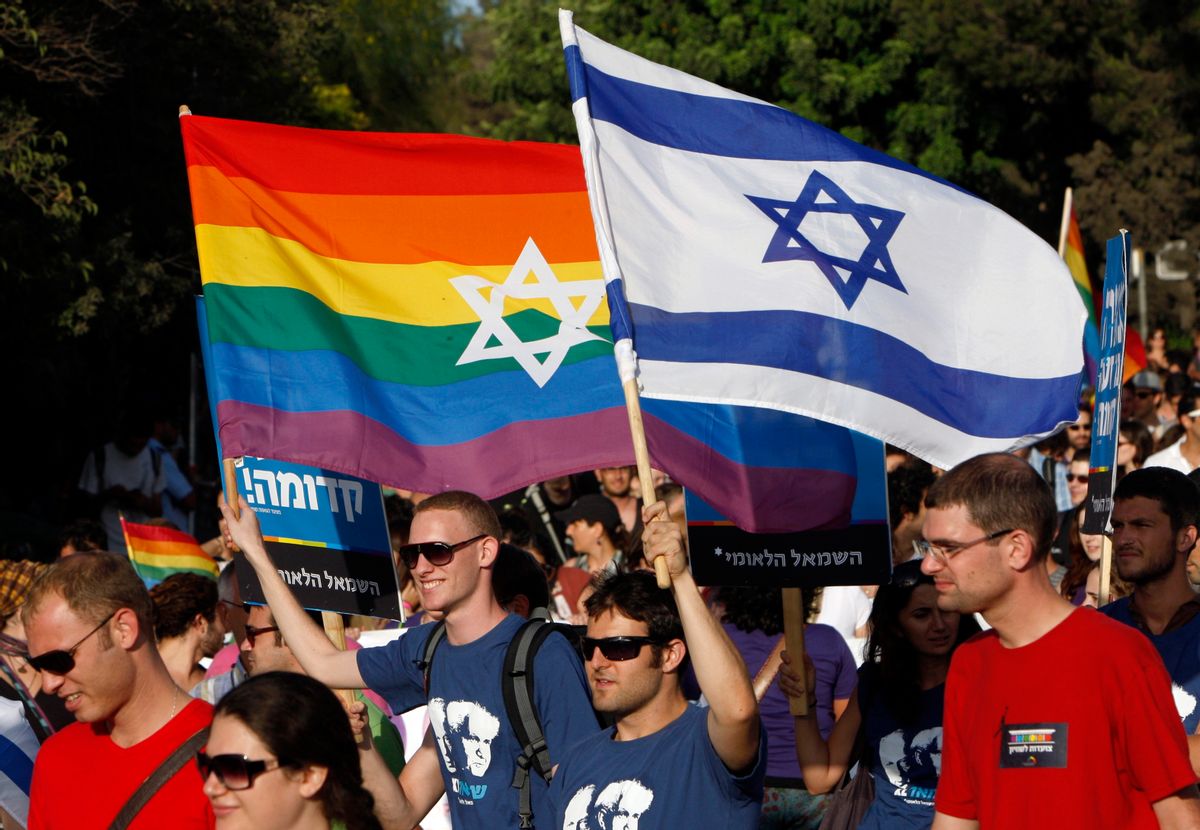 Participants hold flags during the gay pride parade in Jerusalem July 29, 2010. This year's parade marks the one-year anniversary of a shooting attack in a gay and lesbian youth center in Tel Aviv, in which two people were killed and 13 were injured. REUTERS/Ronen Zvulun (JERUSALEM - Tags: POLITICS SOCIETY) (Reuters)
--

A mysterious video painting the organizers of the latest Gaza flotilla as anti-gay was exposed as a hoax last week, in the latest instance of what pro-Palestinian activists call "pinkwashing."

The term refers to efforts by the Israeli government and its allies to highlight the rights afforded to the gay community in Israel -- and the plight of gays in Arab countries and the Palestinian territories -- to distract from or justify the continued occupation of the West Bank and the blockade of Gaza.

Some background on the current flap: The goal of the flotilla organizers is to protest the Israeli naval blockade of Gaza by sailing to the impoverished Palestinian territory. (A similar effort last year ended with Israeli commandos killing several civilians on board one of the ships.)

This video appeared on YouTube purporting to show an American gay rights activist explaining his rejection by -- and disillusionment with -- the organizers of the latest Gaza flotilla. It was promptly promoted on social media by the Israeli Ministry of Foreign Affairs and an intern in Benjamin Netanyahu's office. Watch:

But several bloggers investigated and determined that the man in the video is in fact a Tel Aviv actor. The origins of the film are still murky, but there's some evidence that a public-relations guru who has worked for several Israeli government agencies played a role. (And, as it turns out, there are gay activists involved in the flotilla campaign.)

Hoax though it is, the video presents an opportunity to learn more about the messy collision of the politics of gay rights and the Israel-Palestine conflict. For an Israeli perspective, I spoke to Hagai El-Ad, executive director of the Association for Civil Rights in Israel and former head of a LGBT community center in Jerusalem, where he also organized the first annual pride parade in 2002.

What do you make of this hoax video?

It's highly embarrassing on so many levels. I find it outrageous that anyone would try to use the relatively good reality of LGBT rights in Israel to try to somehow hide human rights violations against anyone else. The flotilla video is perhaps the jewel in the crown of this pinkwashing campaign, but it's certainly not the beginning of it. I hope the embarrassment this should have caused will spell the end of it, but I doubt that it will.

The government's so-called pinkwashing narrative makes Israel out to be a pretty advanced place when it comes to LGBT rights. Is that accurate?

It is accurate. And it's a great source of pride for the gay community in this country. I find it a bit cynical that the government conveniently skips over the fact that actually many of these rights have been won through years of difficult struggle by individuals and human rights groups. But the gay rights community in Israel has many reasons to be proud of achieving much of what we've been fighting for over the years.

What's the history of pinkwashing as a P.R. tactic?

It's part of a broader Ministry of Foreign Affairs strategy that has been branded as quote-unquote Israel Beyond the Conflict. This means trying not to have a conversation about the occupation, about the rights of Arab Israelis, but to have a different conversation about other issues in Israel. In no other arena has that been used in a more cynical way than in the context of LGBT rights.

The pinkwashing effort is part of an agenda that isn't addressing the core issues, isn't really changing the policies that are creating outrage domestically and around the world. Instead it's trying to deal with the problem with public relations, which I think is a misguided attempt that is bound to fail. Anyone that believes in continuing down this road can see for themselves where Israel is in terms of its international image. I think it's very clear the only way to really deal with the growing negative image is to actually address the issues and the policies themselves.

How bad is the LGBT rights situation in Gaza and the West Bank?

The situation in Gaza is certainly much worse than it is in the West Bank. There is no argument with regard to the factual situation. No one is claiming that the gay rights situation in Israel is anything but very good -- it's not perfect, but it is very good. And no one is claiming that the situation in West Bank or in Gaza is anywhere close to where it should be. The argument is about the cynical attempt to use the hard-won rights of one community in Israel -- that should be celebrated -- to hide or even justify human rights violations of someone else.

There are no legal protections for gay rights in the West Bank or in Gaza. People are suffering from various levels of intimidation and persecution. The vast majority of gays and lesbians are forced to live in the closet. Some people try to flee -- and on that account, actually, Israel is much less accepting than it should be in helping LGBT Palestinians. It is a very unfortunate situation. I think it's also fair to mention that, in a similar way to the fact that there are no gay rights in the occupied territories, there is also no freedom of speech in the territories. And in that case it is solely Israel's responsibility for the fact that basically every demonstration against the occupation in the West Bank is illegal. On the broader question of disrespect for human rights in the occupied territories, in many cases the responsibility lies with the Hamas government or the Palestinian Authority -- as is documented by Palestinian rights organizations -- and in many cases it's the responsibility of the government of Israel, such as the blockade of Gaza, the lack of freedom of speech and movement, and other things.

For people interested in helping the LGBT rights situation in the Palestinian territories, is that even possible in the current political context?

I think it's going to be very difficult to improve the situation as long as the occupation continues. And it may be very difficult to advance after the occupation because who knows what kind of government there will be in Palestine. Many parts of the society are very conservative. But the fact that it's very challenging is no reason to give any government a pass on anything but full respect for human rights, including LGBT rights. We're not giving that pass to the government of Israel, and I don't think Palestinian human rights groups are giving it to the Hamas government in Gaza or the [Palestinian National Authority] government in the West Bank.