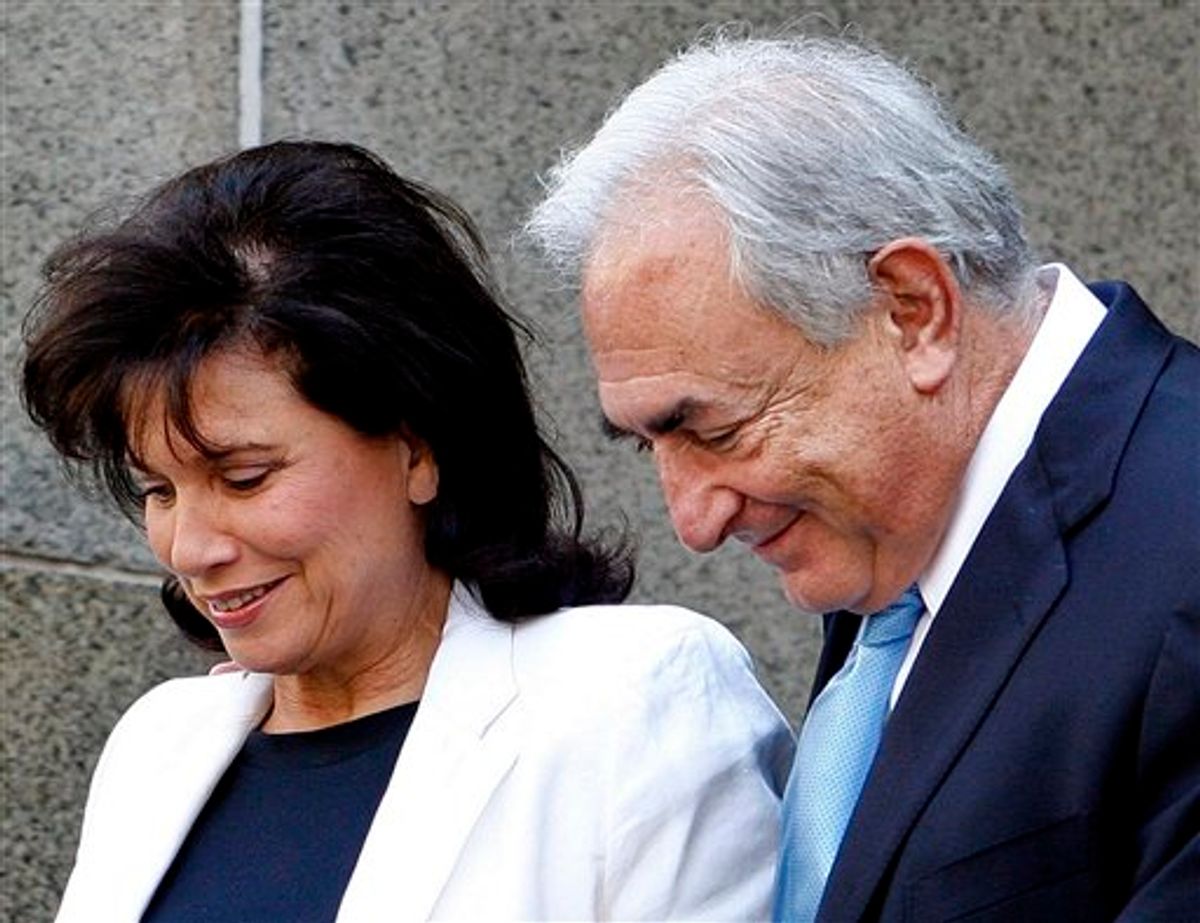 The hotel maid who accused former International Monetary Fund chief Dominique Strauss-Kahn of sexual assault may have inflicted fatal damage on her own case by lying to prosecutors about her life story and what she did in the moments after the suspected attack, legal experts said.

The Manhattan District Attorney's Office revealed Friday that the 32-year-old woman had committed a host of minor frauds to better her life in the U.S. since arriving in the country seven years ago, including lying on immigration paperwork, cheating on her taxes, and misstating her income so she could live in an apartment reserved for the poor.

In a letter to Strauss-Kahn's lawyers, prosecutors also said she had misrepresented what she did immediately after the alleged attack by Strauss-Kahn -- instead of fleeing his luxury suite to a hallway and waiting for a supervisor, she went to clean another room and then returned to clean Strauss-Kahn's suite before reporting the encounter.

That change in her story, and the revelations about her past, wasn't enough to kill the case entirely, but prosecutors acknowledged their position had been shaken, and agreed to a defense request that Strauss-Kahn be freed immediately from house arrest.

The revelations in a case once considered iron-clad came as a shock; prosecutors and police had said repeatedly that the hotel maid was found to be a credible witness.

"Rape cases are especially difficult to try," said Linda Fairstein, who oversaw the sex crimes prosecution unit in the district attorney's office for 25 years. "But they are nearly impossible to try when you find out the witness has already lied to you. The prosecutors and police, they took her word over the word of one of the most powerful men in the financial world."

Investigators have gathered forensic evidence in the case, including traces of Strauss-Kahn's semen found on the woman's work uniform, but that evidence alone isn't enough, said Fairstein, now a crime novelist.

"The DNA clearly suggests there was some kind of sexual exchange between DSK and woman, but it tells you nothing about whether it was forcible," she said. "It can be deposited by consent or by force. Her credibility is the entire case, you have to believe her story."

But she also said that her transgressions don't mean her story is false.

"Bad people, people who lie, they're still sexually assaulted," she said. "So I think what everybody is trying to do now is bring her back again, and say 'OK, you were dishonest about these things, now we have to figure out what really happened between you and this man.'"

At a minimum, questions about the woman's credibility could leave a jury doubtful that she was telling the truth about what happened. They also raise the possibility that the woman herself could be in legal trouble, if the government decides to seek punishment for her past fibs and fabrications.

District Attorney Cyrus R. Vance said the charges, which include attempted rape, will stand for now. But prosecutors had a legal duty to turn over the uncovered information to the defense, and they were continuing their investigation.

In a letter sent to Strauss-Kahn's lawyers, they disclosed several instances in which they believed the woman had lied about herself or the circumstances of her life. They said she'd made up being gang raped and beaten in her homeland of Guinea to enhance her application for political asylum in 2004. She now says she was raped there, but not as she initially said.

U.S. officials are often presented with fabricated stories by people seeking refugee status in the country, and the nation's immigration courts are filled with instances of immigrants who have been caught embellishing personal histories to meet the strict conditions for being granted asylum.

Lori Adams, managing attorney of the legal aid group Human Rights First, said that many people in the immigration system don't have a lawyer, and they blunder through proceedings without fully realizing the potential repercussions of embellishing their life stories.

"A lot of people are on their own, or are poorly advised, and could be tempted to present their story in a certain way that might not be truthful," she said. "Sometimes people get desperate."

She said that if the woman's application was based on fraud, the Justice Department could seek to reopen the case and have her thrown out of the country. Her attorney Kenneth Thompson said she went to prosecutors to tell them the truth, and she had initially feared she'd be deported if she told them why she really left: because she was a victim of genital mutilation and she didn't want her daughter, now 15, to be similarly affected, Thompson said.

Prosecutors said the woman had also been lying on her tax returns about how many dependents she had in order to increase her tax refund and had misstated her income to avoid losing her apartment.

While it wasn't detailed in the letter, prosecutors have also raised other questions about the woman's credibility.

Prosecutors located a recording of the woman, days after Strauss-Kahn's arrest, the woman, talking about the case and mentioning Strauss-Kahn's wealth in a phone call to a man incarcerated on a drug charge, a law enforcement official told The Associated Press, speaking on condition of anonymity to discuss matters not made public in court.

The woman also raised questions by saying she knew little about tens of thousands of dollars others have deposited in bank accounts in her name, the official said. Authorities suspect the money might be drug-related, the official said.

Thompson acknowledged the recording, but said any suggestion she was involved with a known dealer or money launderer was a lie.

"I have not heard that tape," Thompson said. But he said that when he discussed the recording with prosecutors, "I said, 'Did she change her story to this guy in prison?' ... They told me no."

He said that since the start of the case, the woman has been consistent in the most important part of her story, saying that as she began cleaning Strauss-Kahn's suite he grabbed her breast, violently knocked her down and forced her to perform oral sex. He said she suffered bruises and torn ligaments.

Strauss-Kahn, who resigned his post at the powerful monetary organization, has denied the charges. He is due back in court July 18. His attorney, Benjamin Brafman, said he believes his client will be vindicated.

The one-time French presidential contender is now free to travel the U.S. while he awaits trial. He had been under a pricey house arrest in a ritzy Tribeca loft after posting a $6 million cash bail and bond. He smiled as he left the court Friday, hand-in-hand with his wife. His attorneys said they are pleased with the decision, and cautioned again not to rush to judgment. His passport remains surrendered and he can't leave the country.