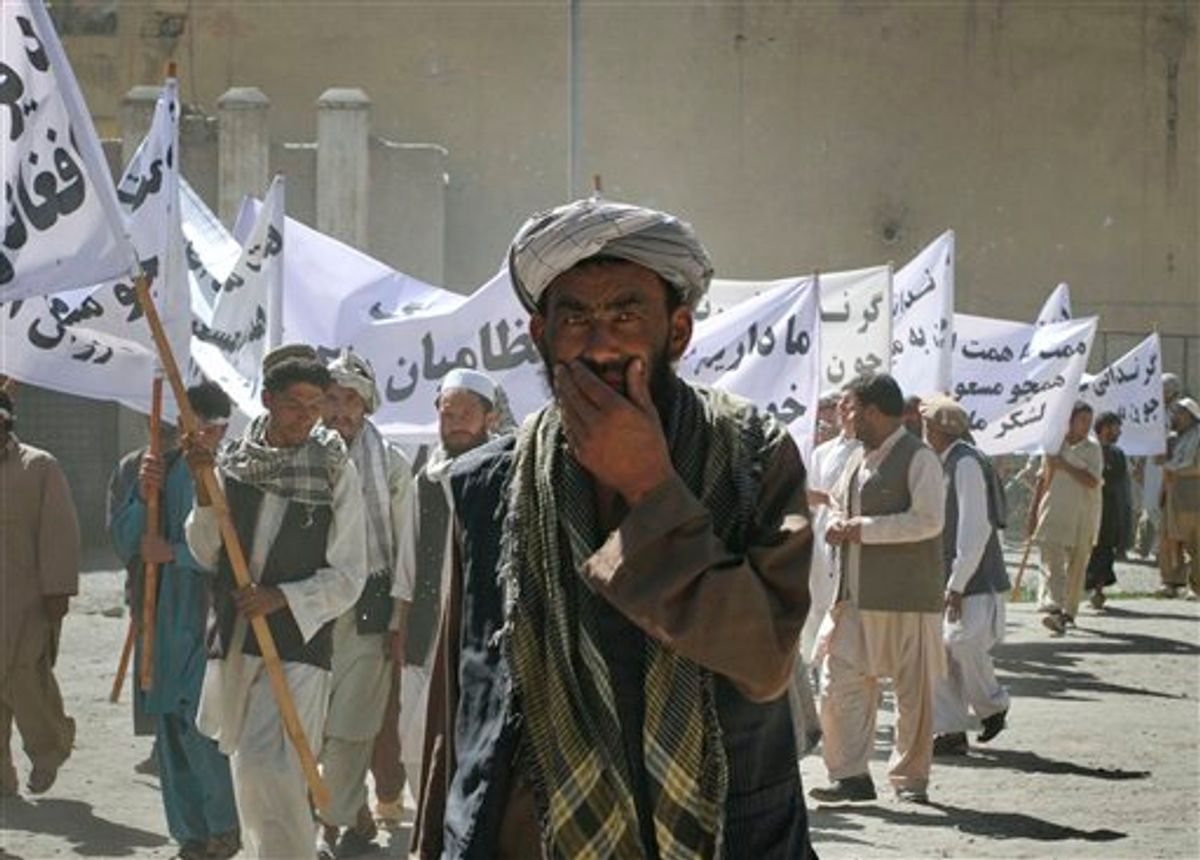 Afghans carrying anti Pakistan slogans during a demonstration in Kabul, Afghanistan on Saturday, July 2, 2011. Several hundred people demonstrated against rocket attacks that have killed an estimated 36 civilians along the eastern border with Pakistan in recent weeks. Pakistan's army has said no rounds were intentionally fired but that some may have accidentally fallen in Afghanistan in fighting with militants carrying out cross-border attacks. (AP Photo/Musadeq Sadeq) (AP)
--

On a mountain trail toward the border with Pakistan, the explosions became louder, more constant and finally visible as puffs of smoke on distant peaks and rising from valleys.

Families escaping the fusillade led donkeys strapped with mattresses and bags of clothes the other way, down the steep footpaths. They passed crippled trees, cratered houses, empty villages. Some of the villagers had shrapnel scars and described seeing relatives blown apart during a five-week artillery barrage from Pakistan.

"My grandson was nine years old," said Juma Gul, a 60-year-old village elder in the Sirkanay district in eastern Afghanistan. "He and three other children were herding our goats when a rocket came. All four were killed. We could not find most of their bodies."

A loud crack sounded and rolled over the peaks. Gul swept his hand toward the mountain range rising toward Pakistan. "Still the rockets are landing here," he said.

The shelling in Kunar province is taking place along one of the most strategically important fronts of the war -- a haven for hardcore insurgent groups fighting in both Pakistan and Afghanistan.

Pakistan has been so stung by insurgents' recent cross-border attacks, they launched an offensive that also highlights NATO's struggles to pacify the area and the lack of cooperation between Afghanistan and Pakistan against their common foes.

NATO officials, in fact, say they were unaware of the extent of Pakistan's artillery barrage across Afghanistan's border until last week because Western troops have been pulled back from more remote outposts in Kunar.

Afghan government officials have accused Pakistan of launching more than 761 rockets over the border into Kunar province since May and causing the deaths of at least 40 people and injuring 51. Pakistan has denied hitting Afghanistan intentionally, but acknowledged its military has been targeting Islamic militants to halt cross-border raids and that some rockets may have strayed off course.

Since those meetings, however, the assaults appear to have intensified in Kunar, about 125 miles (205 kilometers) east of Kabul.

During a two-hour visit to three mountain villages, an Associated Press reporter witnessed at least 50 artillery strikes. One rocket struck a mountain slope about five miles outside of the provincial capital, Asadabad.

The bombings have reopened old wounds along the Durand Line, the disputed 19th century demarcation between Afghanistan and Pakistan. Both countries claim rugged Pashtun tribal areas on either side of the poorly marked border -- which is now the sanctuary for some of the fiercest insurgent groups in Central Asia. The Afghan- and Pakistan-based wings of the Taliban, Hizb-i-Islami, and more international faction such as al-Qaida and Lashkar-e-Taiba also have bases there.

Coalition officials acknowledged that recent tensions along Kunar's border has festered for weeks without an adequate response from the international alliance, in part because they consolidated troops from scattered valley and border outposts to centralized bases after coming under relentless attacks from militants.

"It's more about enemy locations than it is about a spot on the ground," he said. U.S. soldiers have killed 80 to 100 militants in the district, Carroll said.

"The shelling has routinely gone on where we don't have troops," he said.

A study by the Carnegie Endowment for International Peace published in June says "the reorganization of U.S. forces in Kunar and Nuristan has led to an insurgent advance."

"The fact is, the force was too dispersed, and local opposition -- the population was allied with the insurgents -- led the American command to evacuate the most isolated valleys ... as well as certain border outposts," wrote Carnegie visiting scholar Gilles Dorronsoro.

The fighting then shifted to areas where U.S. forces evacuated and now "is intensifying throughout the rest of Kunar," Dorronsoro added.

The situation along Kunar's border suggests the kind of future challenges Afghanistan, Pakistan and NATO will face as U.S. forces leave according to President Barack Obama's schedule for the withdrawal of combat troops by 2014, when security will transition to Afghan control.

During two days in Sirkanay district, Afghan Border Police were the most conspicuous forces on the roads, where they appeared to operate with a degree of autonomy from NATO. Only two other security units were seen: An armored NATO patrol and a newly established local police unit. Two new border police camps built next to NATO bases housed a well-maintained fleet of new Ford pick-up trucks and young policemen carrying AK-47s.

The border police's movements, however, were severely limited by shelling from Pakistan and by Taliban hiding in mountain villages.

Gen. Aminullah Amerkhail, the eastern region commander of the Afghan Border Police, accused Pakistan of assisting the insurgents -- using artillery to clear Afghan villages so Taliban fighters could use them as sanctuaries. Between 700 and 1,000 families have fled border areas in Kunar and neighboring Nangarhar province, Amerkhail said.

"The withdrawal of NATO forces has had a direct effect on insecurity," said Amerkhail, who added that his forces were not strong enough to assault known Taliban positions. "I will not go to those villages without air support from the Americans."

Amerkhail, who earned a reputation for interdicting heroin shipments when he was in charge of security at the Kabul International Airport, offered his resignation to the Afghan interior minister on Thursday to protest NATO's and Pakistan's response to the problems along the border.

Pakistani officials, too, have complained about NATO inaction in southeast Kunar.

Pakistani army spokesman Maj. Athar Abbas said that no rounds have been fired into Afghanistan intentionally, although it is possible that "a few" rounds may have accidentally fallen over the border. Abbas defended the assaults.

"There is no effort to act against these strongholds or sanctuaries," he said. "Many terrorist leaders are gathered there, and there is no pressure on them to leave."

Whatever Pakistan's defensive rationale, Afghanistan views the border attacks as an infringement on its sovereignty.

"The Pakistani artillery attacks are just a continuation of various kinds interference by our neighbors during the last 10 years," said Lutifullah Mashal, a spokesman for Afghanistan's intelligence service. "These have included suicide attacks, roadside bomb attacks and sometimes, sending terrorists to hotels and hospitals and sometimes by firing at us directly."

Afghan security officials have warned Pakistan that continued artillery fire into its territory will be met with a response that could include Afghan military action.

Three villages the AP visited along the Afghan side of the border -- Khadikhail, Shingi Salehabad and Sabagai -- were each separated by a 20-walk along undulating footpaths. A fourth village, Mullah Goray, was further away from the Pakistani border, but all four were close enough that interviews were punctuated by the sounds of detonations at various ranges. Some shelling was so close that both the launches and impacts were heard. Pakistani helicopters could also be seen over the mountains in what villagers said was Afghan territory.

"Here is shrapnel from Pakistan's artillery and rockets, which killed our innocent villagers and children playing in front of their houses," said Mohammad Hasan, 45, in Shingi Salehabad. A rocket exploded within earshot and he looked toward Pakistan. "Attacks are still going on. You can still hear the sound of heavy artillery. During the night we cannot go to sleep."

A villager named Fazel, 18, said he and five relatives were all struck by flying metal.

"The rocket hit our house when we were at home," he said. "Day and night our villages are under attack. In my village 25 people have been killed and wounded."

His relatives fled with 60 other families, he said. He was trying to take care of the remaining animals but did not know how long he would be able to stay.