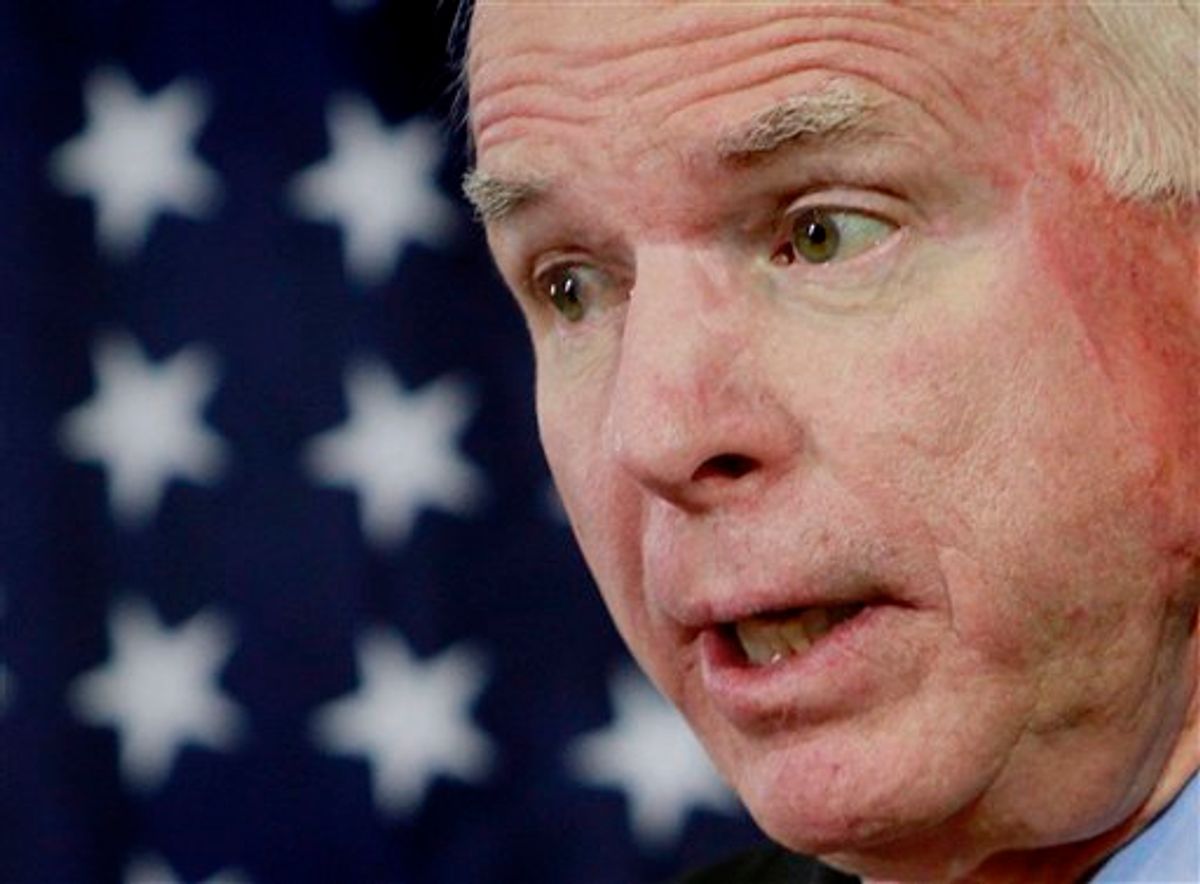 John McCain, Joe Lieberman and Lindsay Graham said they are heartened by the progress of Afghan security forces, but worry that Obama's withdrawal plan could deplete American military strength before dealing a decisive blow to the Taliban, especially in eastern Afghanistan. That part of the country is a haven for the Afghan and Pakistani wings of the Taliban, and al-Qaida affiliates.

"I believe that the planned drawdown is an unnecessary risk," McCain, a Republican from Arizona, who claimed that no military leader has spoken in favor of the timetable.

Lt. Gen. John R. Allen, a Marine general expected to carry out the president's drawdown order, has said the schedule is a bit more aggressive than the military had anticipated. Allen has cautioned that successfully winding down the war will require new progress on a wide front, including more help from allies and less Afghan corruption.

McCain -- during a stop at the Kabul headquarters of the foreign military contingent, called the International Security Assistance Force -- said he's concerned there may not be enough American troops for a move from southern Afghanistan to the east to "finish the job there." There are currently about 90,000 U.S. troops in Afghanistan among a total international force of more than 132,000.

NATO has deployed the bulk of its forces to Helmand and Kandahar, two southern provinces where Afghan Taliban influence is strong, but international terrorist groups are less influential.

McCain said the drawdown will deprive NATO "to a significant degree" as it attempts to pacify eastern Afghanistan next summer.

Graham, a Republican from South Carolina, cited gains in Afghan security force recruitment and capability and said he was optimistic that native forces would soon be ready to take over security. But Graham also worried Obama's withdrawal plan may reduce U.S. troop strength in Afghanistan too quickly.

Lieberman, an independent from Connecticut, said it was important to reassure Afghans that they will continue to receive help long after the 2014 deadline for the withdrawal of U.S. combat troops.

"We're certainly going to be here in great numbers until the end of 2014 and I hope as a result of a strategic long-term partnership with Afghanistan that we will have a military presence here and cooperation here with our Afghan partners for a long time after that," said Lieberman.

The senators were skeptical about Western efforts to reach a negotiated peace with the Taliban's leadership and suggested that political compromises with the insurgents could betray the Afghan people.

"I don't think there will be serious negotiations with the Taliban until they are convinced that they cannot succeed in the attaining their goals through the force of arms on the battlefield," said McCain, who lost to Obama in the 2008 presidential race.

Lieberman said that the Taliban would not seriously consider peace until coalition and Afghan forces "basically beat down and wear down the Taliban fighters and they lose their will increasingly and the leadership is isolated." Lieberman called the idea that Afghan President Hamid Karzai, NATO leaders and insurgent commanders could talk out their differences at a peace conference "a dream, a fantasy."

The senators' harshest observations were reserved for Pakistan, home of many of the insurgent groups NATO forces are currently fighting in Afghanistan.

"There's growing anger, it's not just impatience, in the Congress of the United States toward Pakistan," said Lieberman. "We want to have a good relationship with them but we're tired of seeing them be both our allies and our enemies and supporting our enemies at the same time. They've got to decide to be our allies and we'll be good allies to them, or we won't."

Shortly before the senators' news conference in Kabul, an improvised bomb exploded on the other end of the capital, wounding three Afghan policemen, the Afghan Interior Ministry said. Insurgents have focused many of their attacks on Afghan security forces to undermine their development and NATO's plans to transfer security operations to Afghan control.