What does a closer look at the presidential candidate's Austrian beach reading tell us about the modern GOP? 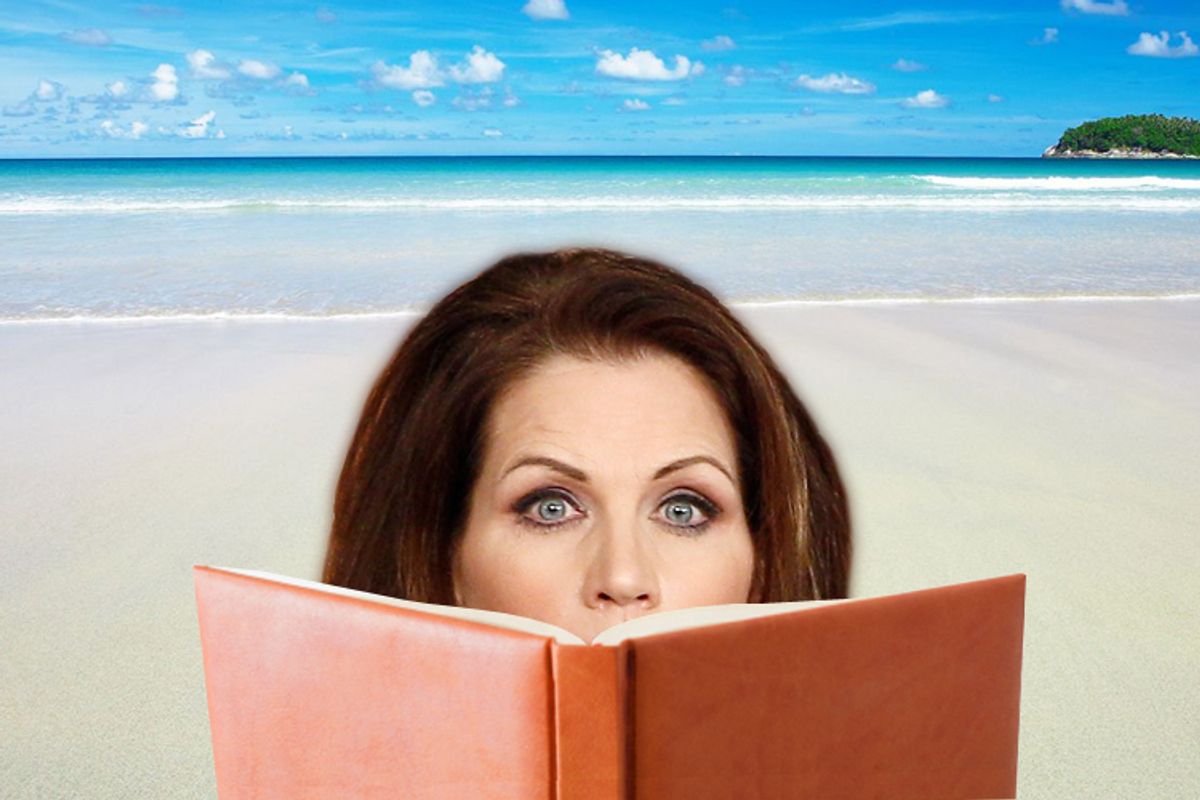 Like a dog gnawing on a steak bone, I can't let go of Michele Bachmann's boast to the Wall Street Journal two weeks ago that "when I go on vacation and I lay on the beach, I bring von Mises."

Ludwig von Mises was one of the most influential thinkers associated with the beloved-by-free-market-libertarians school of Austrian economics. Since officially declaring her candidacy for the presidency, Bachmann has already made more than her fair share of gaffes, but her Mises shout-out displays a sharp sense of humor. The most recent paperback edition of Mises' "Human Action" is 1128 dense pages, packed with philosophical jargon and convoluted argumentation. It is the very antithesis of what most humans would consider beach reading -- even a Kindle would be weighed down!

I know this now, because spurred on by readers who rightly assumed that I had not read deeply into the Mises ouvre and thus had no right to mock it, and shamed by a cutting blog post at Economic Policy Journal making clear that a Mises reference to "white peoples" I had raised my eyebrows at was not in fact an indication of latent racism, I decided to tackle "Human Action." While I still don't believe Bachmann actually spends her hours underneath the coconut palms immersing herself in the intricacies of the Austrian school, there is no question that she favors economic policies that Mises would approve of. So what can we learn about her, from reading Mises?

I am abashed. 1100 pages of Mises is a challenge I have been unable to meet. Maybe I need some more vacation time and a ticket to Bali. So far, I have only made my way through the introduction and first two chapters of "Human Action." I will preemptively concede that my understanding is still shallow. Nonetheless, there's enough in those first 70 or so pages for a blog post that may begin to answer a question that has intrigued me for years. How do we reconcile the political merger of evangelical, fundamentalist Christianity with the resolutely anti-government-intervention stance of free market libertarianism?

It's one of the great mysteries of the modern Republican party. On the one hand, the version of Christianity that dominates the contemporary GOP believes that the church and state should not be separated and that government has the right to enforce an explicit code of conduct (with respect to sexual behavior, reproductive family planning, school curriculum, etc). But libertarians -- with a special emphasis on von Misean libertarians -- believe government should stay out of economic affairs as much as possible.

At heart, despite the size of his vast tomes -- Mises' explication of economics is founded on one major insight: the primacy of the price mechanism. Humans get what they want by choosing to expend some medium of exchange for goods or services that will enable them to reach their ends. By placing value on something, they incite its production. All society has to do to move forward is to get out of the way of people participating in the miraculous, all-encompassing engine of choice:

All ends and all means, both material and ideal issues, the sublime and the base, the noble and the ignoble, are ranged in a single row and subjected to a decision which picks out one thing and sets aside another.

Indeed, all the progress that has occurred in the past few centuries, argues Mises, can be attributed to the unleashing of the power of capitalism through unconstrained economic activity. Furthermore, it is Mises' contention that economists -- the classical economists who flourished in England and France in the 17th and 18th centuries -- are the true heroes of civilization: mankind's great liberators.

... [T]he tremendous progress of technological methods of production and the resulting increase in wealth and welfare were feasible only through the pursuit of those liberal policies which were the practical application of the teachings of economics. It was the ideas of the classical economists that removed the checks imposed by age-old laws, customs, and prejudices upon technological improvement and freed the genius of reformers and innovators from the straitjackets of the guilds, government tutelage, and social pressure of various kinds. It was they that reduced the prestige of conquerors and expropriators and demonstrated the social benefits derived from business activity. None of the great modern inventions would have been put to use if the mentality of the precapitalistic era had not been thoroughly demolished by the economists. What is commonly called the "industrial revolution" was an offspring of the ideological revolution brought about by the doctrines of the economists. The economists exploded the old tenets: that it is unfair and unjust to outdo a competitor by producing better and cheaper goods; that it is iniquitous to deviate from the traditional methods of production; that machines are an evil because they bring about unemployment; that it is one of the tasks of civil government to prevent efficient businessmen from getting rich and to protect the less efficient against the competition of the more efficient; that to restrict the freedom of entrepreneurs by government compulsion or by coercion on the part of other social powers is an appropriate means to promote a nation's well-being.

One of the most striking things I have learned about Mises is that, at least while writing "Human Action" in the late 1940s, he appears to have suffered from a sense of aggrievement at how the lessons of classical economists were being ignored during his day, whether by American New Dealers or Soviet communists. Mises is a truth-teller, but everywhere, his gospel is being ignored or trampled.

The characteristic feature of this age of destructive wars and social disintegration is the revolt against economics. Thomas Carlyle branded economics a "dismal science," and Karl Marx stigmatized the economists as "the sycophants of the bourgeoisie." Quacks -- praising their patent medicines and short cuts to an earthly paradise -- take pleasure in scorning economics as "orthodox" and "reactionary." Demagogues pride themselves on what they call their victories over economics. The "practical" man boasts of his contempt for economics and his ignorance of the teachings of "armchair" economists. The economic policies of the last decades have been the outcome of a mentality that scoffs at any variety of sound economic theory and glorifies the spurious doctrines of its detractors. What is called "orthodox" economics is in most countries barred from the universities and is virtually unknown to the leading statesmen, politicians, and writers. The blame for the unsatisfactory state of economic affairs can certainly not be placed upon a science which both rulers and masses despise and ignore.

Intriguingly, Mises does not differentiate between totalitarian dictatorships and constitutional democracies. In both cases, the ruler scoffs at the economist.

The issue has been obfuscated by the endeavors of governments [and powerful pressure groups] to disparage economics and to defame the economists. Despots and democratic majorities are drunk with power. They must reluctantly admit that they are subject to the laws of nature. But they reject the very notion of economic law. Are they not the supreme legislators? Don't they have the power to crush every opponent? No warlord is prone to acknowledge any limits other than those imposed on him by a superior armed force. Servile scribblers are always ready to foster such complacency by expounding the appropriate doctrines. They call their garbled presumptions "historical economics." In fact, economic history is a long record of government policies that failed because they were designed with a bold disregard for the laws of economics.

I will leave a critique of Mises to another time -- perhaps when I've read more than a mere ten percent of "Human Action." But aside from the content of the first two chapters, what struck me most about "Human Action" was Mises' absolute certainty that he was right, beyond any reasonable doubt, that he had grasped an essential truth of existence, comprehended the primary engine of progress, and that anyone who might think differently is a fool or a tyrant -- or, perhaps worst of all from my vantage-point, a "servile scribbler" fostering complacency in the face of harsh enlightenment.