Thousands protest across Morocco despite reforms

While the government and politicians are often despised, the 47-year-old king himself remains popular 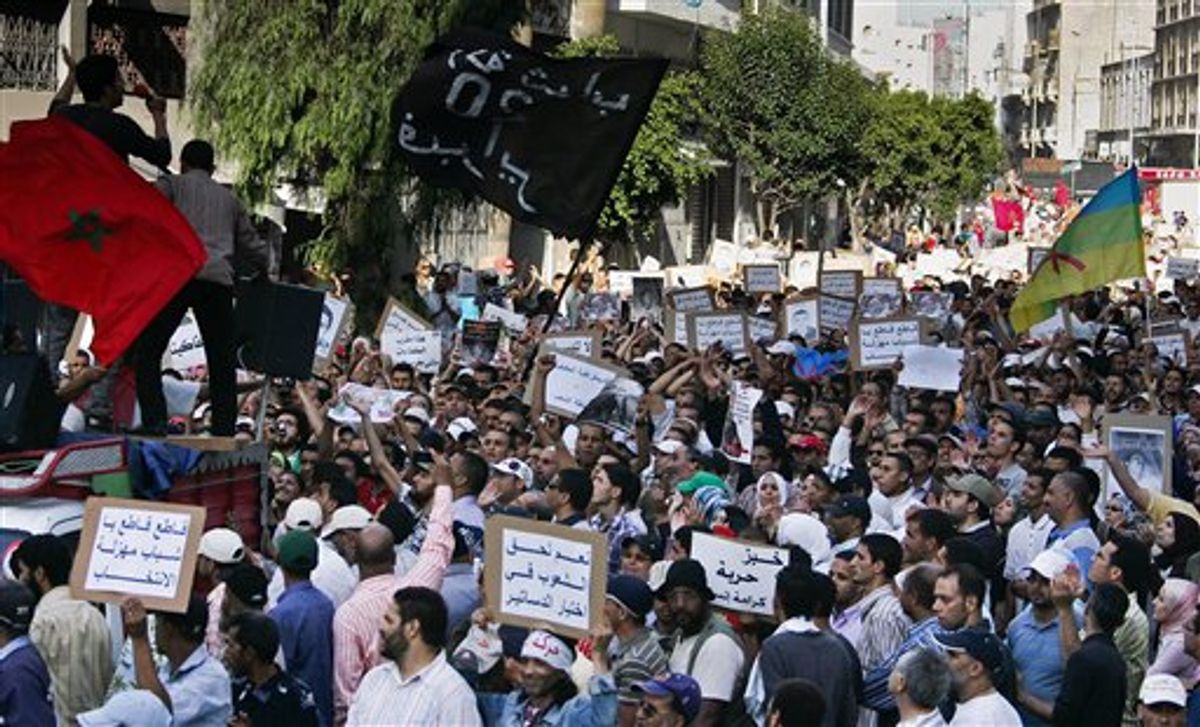 Thousands marched through Morocco's economic capital with various signs, including right "Bread, Freedom, Dignity and Human", right, "Yes people have to chose the constitution", center, and "Boycott, boycott ridicules election", left, during a rally organized by the 20th February, the Moroccan Arab Spring movement in Casablanca, Morocco, Sunday, June 12, 2011. Protesters called for greater democracy and an end to corruption even as the king prepares to unveil new constitutional amendments to address calls for reform. (AP Photo/Abdeljalil Bounhar) (AP)
--

Thousands of pro-democracy activists in Morocco demonstrated Sunday around the country two days after the king's new constitution was overwhelmingly approved in a referendum.

The February 20 democracy movement, whose demonstrations over the past few months prompted King Mohammed VI to initiate his own reforms, showed it could still bring thousands into the streets.

The movement, which is calling for a parliamentary monarchy, has rejected the amended constitution, saying it still leaves most powers in the king's hands and does little to address society's problems.

At least 2,000 people marched through downtown Rabat chanting slogans decrying corruption and tyranny as well as the new constitution.

Small pockets of government supporters could be seen in the streets near the demonstration, but police kept the two groups separated.

In Morocco's largest city of Casablanca, however, the two groups clashed, with supporters of the king hurling stones and chasing democracy activists through the streets.

An Associated Press photographer was at one point set upon by a gang of government supporters and beaten and his equipment damaged before he was rescued by a police officer.

There were also demonstrations in the port city of Tangiers and the popular tourist destination of Marrakech.

The North African country of 32 million has been swept by pro-democracy protests -- like in other countries across the Arab world -- denouncing low wages, poor education and perceptions of widespread government corruption.

While the government and politicians are often despised, the 47-year-old king himself remains popular and protests have not reached the levels scene elsewhere in the region.

The February 20 movement has pledged to keep up its weekly demonstrations until there is what they perceive to be real reform.