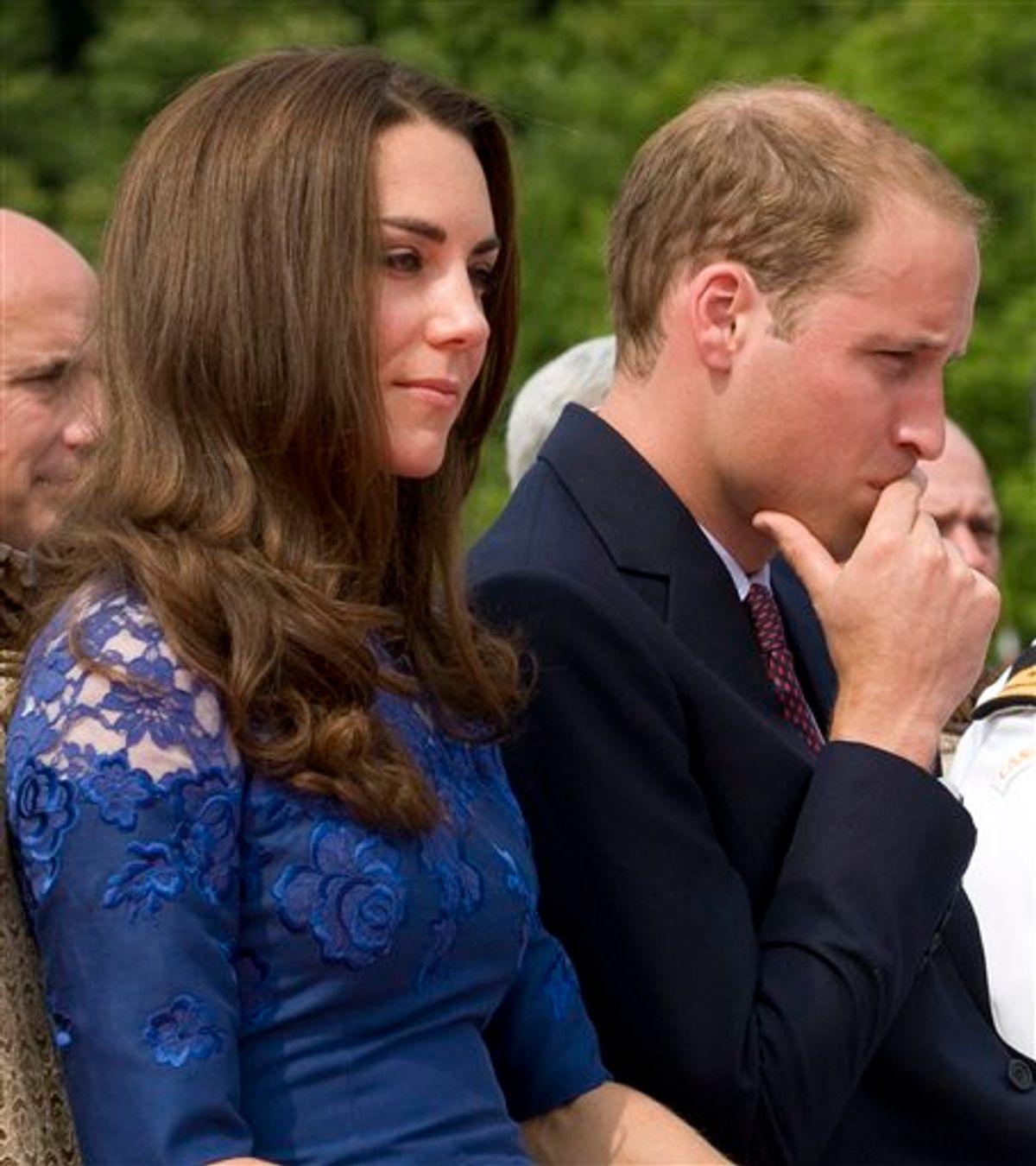 Prince William and Kate faced more protests by French-speaking separatists Sunday after arriving in Quebec City on a Canadian navy frigate that sailed down the picturesque St. Lawrence Seaway..

The newlyweds are on the fourth day of a nine-day trip to Canada in what is their first official overseas trip since their April 29 wedding.

The Duke and Duchess of Cambridge encountered small but vocal protests in Montreal, the French-speaking province's biggest city, on Saturday after being cheered by tens of thousands the previous day in Canada's largely English-speaking capital, Ottawa.

Prince William and Kate sang hymns as they took part in a bilingual interfaith prayer service on the deck of the HMCS Montreal which docked in Quebec City after an overnight trip from Montreal. They then headed ashore for a meeting with residents of La Maison Dauphine, a center that helps homeless youths.

Police were out in force in downtown Quebec City. More than 150 protesters, some wearing black and waving flags, demonstrated about two blocks from City Hall, where Prince William was due to make remarks.

A far larger crowd of supporters, chanting "Will and Kate." were allowed closer to City Hall and greeted the royal motorcade with loud cheers when it arrived.

The protesters chanted "RRQ," the initials of the anti-monarchist, separatist group, Reseau de Resistance du Quebecois, or Quebecker Resistance Network, which organized the protests in Montreal and Quebec City.

Police set up barriers to keep the protesters away from City Hall, but the demonstrators brought a pickup truck with audio equipment and speakers so their chants could be heard. They carried signs reading "Pay your own way" and "The monarchy, it's over."

The visit touches a sensitive nerve among French-speaking separatists because Prince William and Kate later Sunday afternoon were to visit the Citadelle, a fortified residence at the foot of the Plains of Abraham, the site of the pivotal 1759 battle in which British forces defeated the French to seal the conquest of New France.

Vocal yet vastly outnumbered protesters failed to cause any disruption to the royal couple's events in Montreal on Saturday, other than aggravating some of the pair's supporters.

About 35 protesters, including members of the Quebecker Resistance Network, stood outside Sainte-Justine University Hospital Centre in Montreal. They were outnumbered about 10 to one by William and Kate supporters gathered outside the children's hospital where the newlyweds visited cancer patients and the hospital's neonatal care facility.

The protesters were drumming and booing as the royal couple's motorcade pulled up to the hospital. William was whisked into the hospital as Kate stepped out of the car and smiled at the crowd before going in.

The demonstrations were a rare moment of criticism aimed at the young royals, who have for the most part been welcomed with open arms by Canadians eager to see the glamorous newlyweds.

After leaving the hospital, the royal couple headed to the Institut de Tourisme et D'Hotellerie du Quebec, where they were met again by a handful of protesters dominated by about 150 supporters.

Once inside, Kate and William donned aprons and took part in a cooking workshop at the facility, which is a government agency that conducts training and research in the hotel, tourism and food service industries.

Wearing white cooking jackets, the pair got into the pots and pans to whip up some authentic Quebec fare, including Charlevoix lamb and a lobster souffle. The couple also dined with Quebec Premier Jean Charest and his wife Michele.

A 2009 visit by Prince William's father, Prince Charles, to Montreal was disrupted by more than 200 separatist protesters. The protesters sat in the street, blocking the prince's way into a ceremony planned at an armory, and threw eggs at the soldiers who were accompanying him and his wife, the Duchess of Cornwall. The couple were forced to enter the building through a back door and missed an elaborate welcoming ceremony that had been planned.

In 1990, Canada Day celebrations were disrupted briefly by protesters from Quebec who booed and turned their back on Queen Elizabeth.

Protesters were angry that Canada still has ties to the monarchy. Queen Elizabeth II is still the country's figurative head of state and new Canadian citizens still pledge allegiance to the Queen during their swearing-in ceremony. Others said they were angry that taxpayer money is being used to pay for the royal tour.

However, support for the separatists among Quebeckers has been on the decline in recent years as the 80-percent French-speaking province has enjoyed plenty of autonomy even without quitting Canada.

"As far as I'm concerned they're welcome here anytime. These young people need a chance. If their ancestors messed up, they need a chance to be forgiven," said John Harbour, 58, a French-Canadian master mariner, who was among dozens of onlookers hoping for a glimpse of the royal couple at the Quebec City waterfront.

The royal couple were to fly later Sunday to Charlottetown, Prince Edward Island. They leave Canada for a three-day trip to California on July 8.