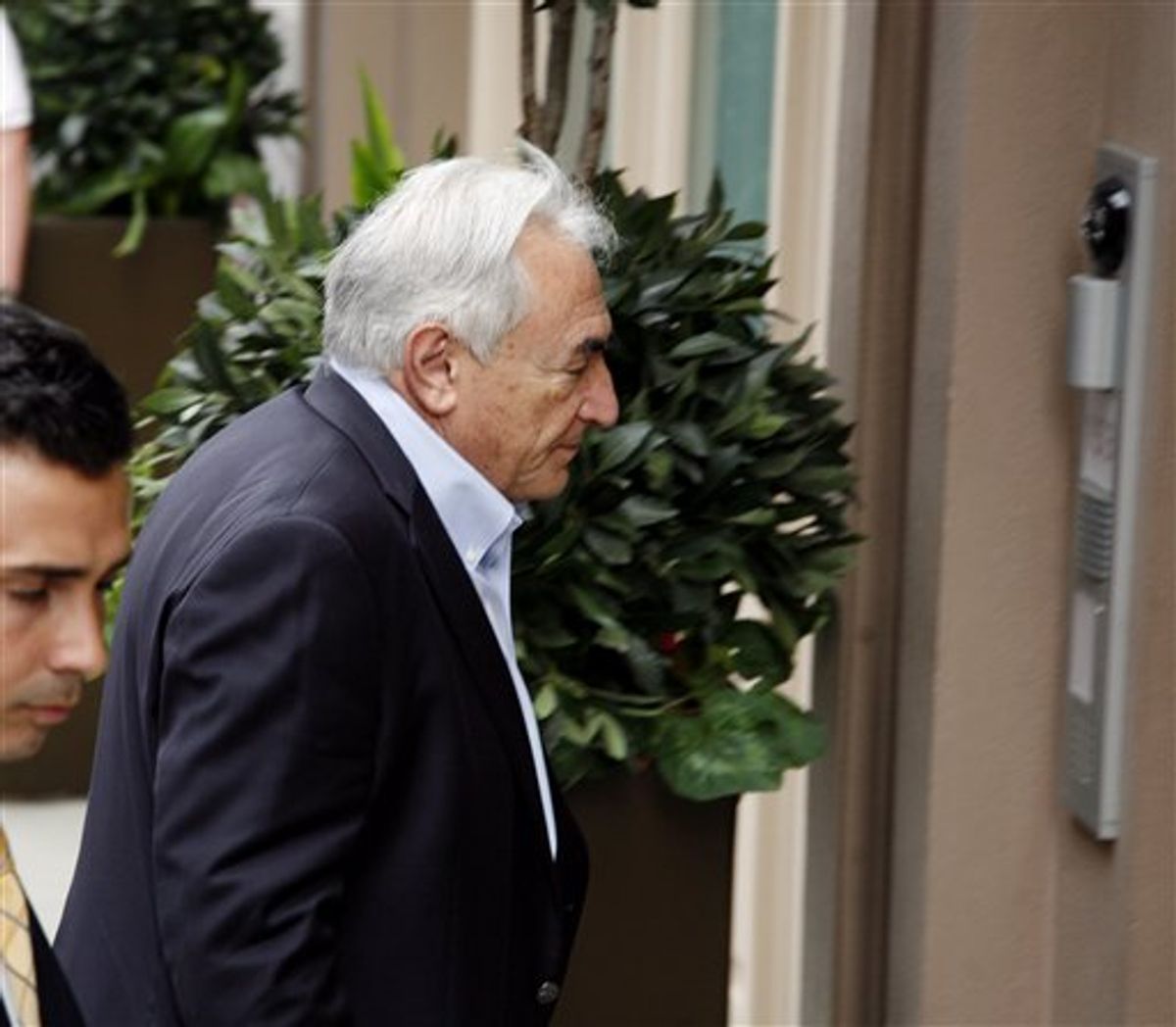 Former International Monetary Fund chief Dominique Strauss-Kahn returns to his house on Franklin St. in the Tribeca section of downtown Manhattan Saturday, July 2, 2011 in New York. Strauss-Kahn was been accused by a Sofitel hotel maid of trying to rape her in May, but prosecutors told a judge on Friday, July 1, 2011, they had discovered serious problems with the maid's credibility. The judge subsequently lifted his house arrest, allowing him to travel in the U.S. but not abroad. (AP Photo/David Karp) (AP)
--

At first, prosecutors said their sexual assault case against Dominique Strauss-Kahn was growing more formidable by the day. Six weeks later, they said his accuser's history of lying raised major red flags, but they weren't dropping the case, at least for now.

With the former International Monetary Fund leader freed from house arrest because the case has weakened, prosecutors aren't saying what their next move may be.

Some legal experts say prosecutors will all but have to abandon the case because of the damage to the accuser's overall credibility, even if they believe Strauss-Kahn attacked the woman, a housekeeper at a New York City hotel where he was staying. Still, at least one former high-level prosecutor thinks the case isn't doomed.

For now, Manhattan District Attorney Cyrus R. Vance Jr. is saying only that prosecutors will keep investigating "until we have uncovered all relevant facts.

"Our commitment to the truth and the facts will govern how we proceed," he said in a statement Friday.

Prosecutors have a number of options, including going ahead with the current charges or reducing them.

They could try to negotiate a plea deal, though it's unclear whether Strauss-Kahn would entertain one. He has asserted his innocence, and the doubts raised about the woman's trustworthiness would likely improve his chances at a trial. While prosecutors haven't questioned her account of the alleged attack itself, they say she's been untruthful about a number of other things, including what she did right afterward. That could make potential jurors reluctant to take her word over Strauss-Kahn's.

Or prosecutors could ask a judge to dismiss the case, as Strauss-Kahn's lawyers have called on them to do.

"As a former sex crimes prosecutor myself, I wouldn't want to try this case," said Allison Leotta, until recently an assistant U.S. attorney in Washington, D.C., where the federal lawyers act as local prosecutors.

"People are going to have a very hard time believing her," said Leotta, also the author of "Law of Attraction," a recently published novel.

The hotel maid told authorities that Strauss-Kahn forced her to perform oral sex and tried to pull down her pantyhose after she arrived to clean his suite May 14. Her lawyer, Kenneth Thompson, said Friday that Strauss-Kahn bruised the woman's genitals, ripped her hose and damaged a ligament in one of her shoulders in a violent attack.

His semen was found on her uniform, people familiar with the investigation have said.

Strauss-Kahn's lawyers say anything that happened between the two wasn't forced.

The Associated Press generally doesn't name accusers of sex crimes unless they agree to be identified.

Authorities initially called the 32-year-old woman credible. But prosecutors now say she lied to them about her background -- including by fabricating an account of having been gang-raped in her native Guinea -- and didn't tell a grand jury she had gone on cleaning rooms for a time before alerting her supervisor about the attack. She also has fudged on tax forms to keep subsidized housing, they said.

A law enforcement official has said prosecutors also found a tape of the woman telling an incarcerated man that Strauss-Kahn had money, and authorities learned that other people had put tens of thousands of dollars in bank accounts in her name, deposits she said she knew little about but authorities suspect may be tied to drug dealing. The official spoke on condition of anonymity to discuss matters not made public in court.

Thompson said the woman had "made some mistakes" but wasn't involved with drugs.

Prosecutors often pursue cases in which victims have problematic backgrounds. But the Strauss-Kahn accuser's history of lying about circumstances of rape, possible allusion to a financial motive for pursuing the case and the changing account of what happened just after the alleged incident could be major hurdles, several legal experts said.

Not so to former Michigan Attorney General Mike Cox. He notes that the maid was in Strauss-Kahn's room only briefly -- a timeline that, to him, casts doubt on a consensual encounter -- and that DNA evidence shows something sexual happened.

"The prosecution still has the makings of a very strong case there," said Cox, also a former prosecutor in Detroit. He's now in private practice.

Whatever prosecutors decide to do as the case goes forward, they have found themselves under pressure to explain how it got to this point.

The stakes are high for Vance. The DA's biggest case in his 18 months in office prompted Strauss-Kahn to resign his IMF post and scrambled politics in his native France, where he had been considered a presidential contender in next year's election. Vance personally made the call to bring formal charges against Strauss-Kahn after police arrested him, according to a law enforcement official who spoke on condition of anonymity to discuss prosecutors' internal decision-making.

A new poll indicates that the French are divided over whether Strauss-Kahn should re-enter politics after the weakening of the case against him.

Forty-nine percent of those surveyed in the Harris Interactive poll for French newspaper Le Parisien responded 'yes' to the question "Without prejudging his innocence or guilt, do you want DSK to come back to the French political scene one day?" Forty-five percent said 'no' and 6 percent didn't answer the question.

The DA's office insists prosecutors acted properly by pursuing what they saw as a credible allegation, supported by DNA evidence and witnesses to the woman's distraught demeanor. Prosecutors emphasize that they kept investigating and made their new concerns known relatively early in the case.

"At every step of the way, the district attorney's office made the right decisions," spokeswoman Erin Duggan said.

Some legal experts agree. Once the woman made what seemed like a believable report, "Are you going to say, 'He's a very important man -- we're not going to take your word for it?'" asked Fordham Law School professor James A. Cohen.

But others feel that prosecutors let themselves be driven by wanting to take an aggressive posture in a prominent case -- so aggressive that, when arguing against bail for Strauss-Kahn early in the case, they invoked Roman Polanski, the movie director who fled the U.S. while facing sentencing in a child sex case.

After his house arrest was lifted, Strauss-Kahn enjoyed his first day of freedom Saturday by ducking out of his rented town house with his wife and returning a few hours later. He remained inside Sunday morning.

Strauss-Kahn is due back in court July 18.

Jennifer Peltz can be reached at http://twitter.com/jennpeltz.