What is a "constitutional conservative" anyway?

From Goldwater to Bachmann, the meaning of one of the right's favorite terms has evolved considerably 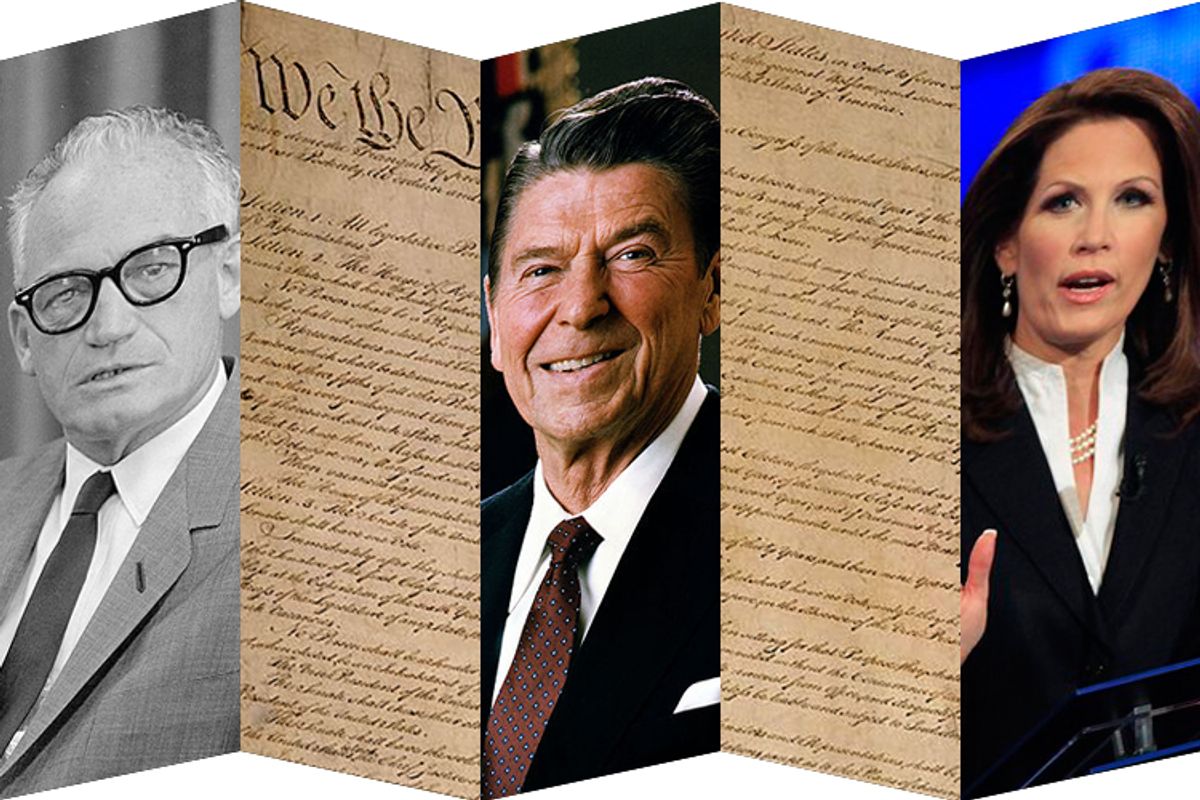 Michele Bachmann calls herself a "constitutional conservative." So does Rand Paul, and anyone endorsed by Sarah Palin gets the label as well. As the nation heads towards defaulting on its debt obligations and the state of Minnesota remains closed, it’s worth pondering what constitutional conservatism actually means, and what lessons we can take from it.

For conservative politicians, the name signals that they are identifying as Tea Party members, which means limiting government, balancing the federal budget, lowering taxes, ending redistribution from the wealthier to the poor, assigning a central position for God in the lives of Americans, even in courthouses and public schools, and asserting the right to bear arms. While God will always be given top billing, one gets the sense that lowering taxes and eliminating social programs are actually the most important pillars in the platform -- so much so that many elected officials claim to be unwilling to compromise no matter what the short-term consequences.

Yet the term "constitutional conservative" is older than the Tea Party movement, and has a subtle yet important difference to it, since it focuses on moderation. For contemporary conservative political theorists like Harvey Mansfield and Peter Berkowitz, among others, constitutional conservatism requires a proper balance between principle and prudence -- that is, between living up to one’s ideology, and living together in a democratic community in which all acknowledge the necessity of compromise. God remains central, for religion provides a source of virtue and a reason to sacrifice for the greater good, and protecting individual liberties still remain the fundamental goal, but being a constitutional conservative for political theorists above all requires an awareness of political realities, and an accommodation to them in order to a allow a range of people in a society to live together peacefully.

The great writers in the conservative pantheon such as J. S. Mill, Edmund Burke, Alexis de Tocqueville, Benjamin Franklin, Abraham Lincoln, and the authors of the Federalist Papers, all focused on how a society of people with very different values could live together. As we celebrate the nation’s independence this week, it is worth reminding ourselves that the American political system that rests on their theories has been such a success because of this tradition of moderation, compromise, and an accommodation of differences.

Even the two greatest standard bearers of political conservatism acknowledged this reality. Barry Goldwater may always be best-known for arguing that extremism in defense of liberty is no vice, but his actions were usually far more moderate, and his Senate career was filled with working with those from across the aisle to achieve his goals.

Taking office in 1980 amid rising gas prices, a stagnant economy, and high unemployment, Ronald Reagan argued that government was not the solution to the nation’s problems, but rather it was the problem. Yet as Berkowitz has written, Reagan’s rhetoric deploring "unnecessary and excessive growth of government" implicitly conceded that there could be necessary and appropriate growth, and he in fact allowed taxes to rise and government spending to grow above inflation without sacrificing his principles.

It isn’t simply that Tea Party members are against having their tax money spent on (undeserving) others; Tea Partiers are actually for something. They want a world where each household is responsible for its own place on the socioeconomic ladder, even if it means some will fail. They are for local communities determining what values their schools will inculcate, and they want the virtue taught by Christianity and Judaism to play a central role. Tea Party rhetoric is also infused with generosity towards the needy, but through voluntary -- not coercive -- giving, allowing for individual caring and the building of bonds that bridge across social differences. This appears to be supported by action, largely through churches.

The real line in the sand for political constitutional conservatives is taxes. They are not to rise, for anyone, under any circumstances. Period. If one truly believes that much of what the federal and state governments currently do is unconstitutional, this stance may not be all that unreasonable -- in theory. Certainly over time, if America’s citizens believed the government had overstepped its bounds, they could shrink it gradually in a manner that neither disrupted society nor the economy, and that allowed tax rates to decline.

Today’s officeholders who call themselves constitutional conservatives have taken a very different approach. They may do well to revisit their theoretical brethren who acknowledged the necessity of living according to principle while not being ideologues, of being driven by values and not opportunism, of compromising on policy while remaining true to principle, and understanding that as much as one would like to move society in a certain direction, it may not happen overnight.

As the federal government stands on the brink of defaulting on its debt obligations, the question for the moment is whether political constitutional conservatives, too, can find proper balance between principle and prudence, between staying true to their ideology, and living together in a democratic community in which all acknowledge the necessity of compromising with others.

Brian J. Glenn is a political historian who teaches in the Department of Government at Wesleyan University. His book, "Conservatism and American Political Development" (co-edited with Steven M. Teles), was published by Oxford University Press in 2009.