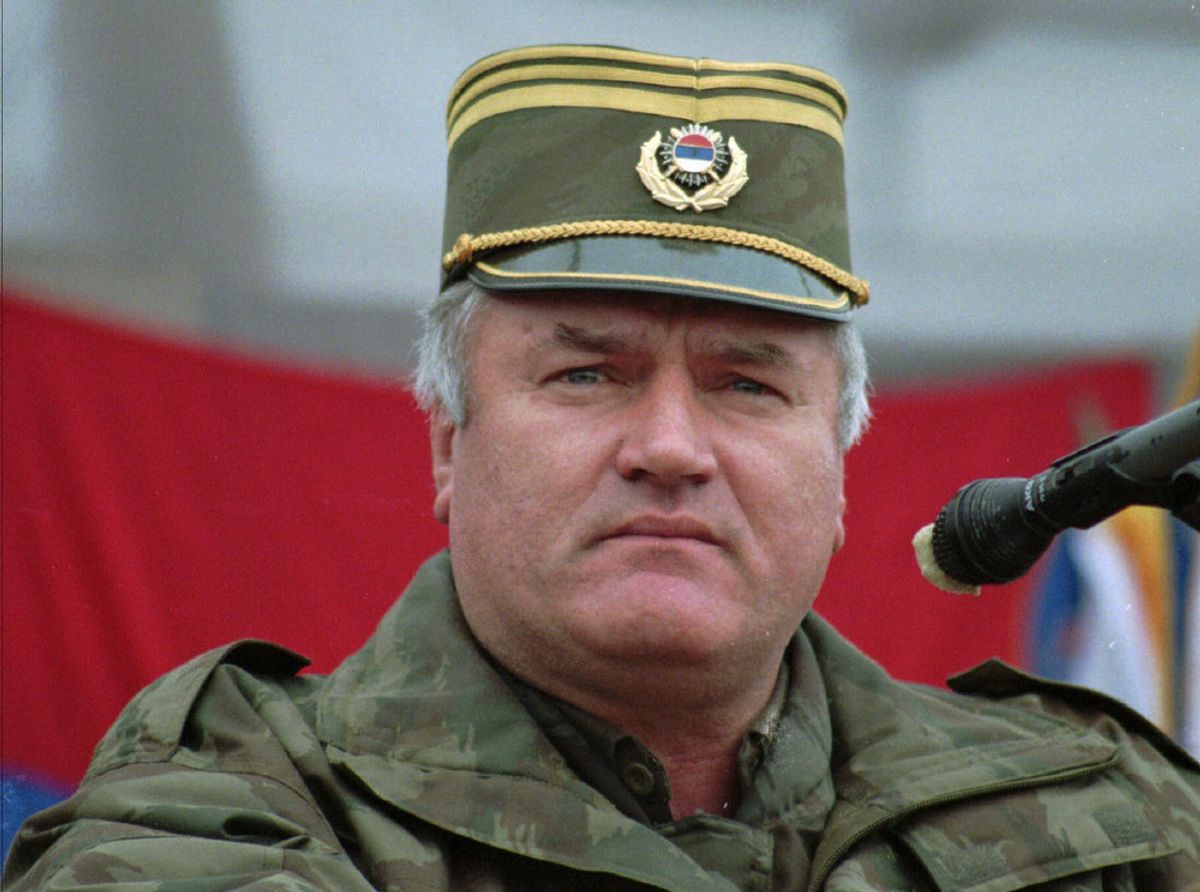 He put on a cap, defying the rules of the courtroom. He gestured to the packed public gallery despite a judge ordering him not to. He threatened a boycott because his chosen lawyers weren't there.

A belligerent Ratko Mladic repeatedly disobeyed and shouted at judges Monday during an arraignment at the Yugoslav war crimes tribunal. Finally, the former Serb general was thrown out of the hearing and the court entered not guilty pleas on his behalf to 11 charges of masterminding the worst atrocities of the Bosnian war.

The 69-year-old's courtroom theatrics came at the start of a solemn week for survivors of the Srebrenica massacre he is accused of orchestrating, as officials prepare to rebury 600 people whose remains were dug out of mass graves in the past year and identified using DNA tests.

On July 11, the bodies unearthed in the hills surrounding Srebrenica will be laid to rest at a cemetery for victims of the mass executions as thousands remember their lost relatives.

Mladic's actions drew anger from survivors of the 1992-95 Bosnian war and raised the prospect of another turbulent trial at the U.N. court that may offer victims more heartache than justice.

In Srebrenica, the Bosnian town where Mladic is accused of commanding troops who killed about 8,000 Muslim men and boys in 1995 in Europe's worst massacre since World War II, survivor Fadila Efendic said Mladic's behavior was like salt in her wounds.

Mladic had threatened to boycott Monday's hearing, only his second public appearance since Serbia extradited him to The Hague in May, because the court had not appointed Belgrade attorney Milos Saljic and a Russian lawyer to represent him.

Shortly before guards escorted Mladic from court, he shouted at Presiding Judge Alphons Orie, "You want to impose my defense. What kind of a court are you?"

The judge told him that the court's registry is studying Mladic's request to be represented by the lawyers.

When Orie began reading out the charges, Mladic said, "No, no, no! Don't read it to me, not another word," and pulled off his earphones, slumping back in his seat with a frown.

After Orie warned him to be quiet or be removed, Mladic shot back: "Remove me."

Such defiant outbursts are not new at the tribunal. Former Serbian President Slobodan Milosevic and other high ranking suspects tried to use their trials to discredit the court and promote nationalist ideologies. Milosevic died of a heart attack in 2006 before a verdict could be reached in his case.

Legal expert Mark Ellis, executive director of the International Bar Association, said Orie will try to give victims a sense of justice by reining in Mladic's antics, while at the same time ensuring his rights are protected.

"Orie will not permit Mladic to take over these court proceedings, and hopefully in preventing Mladic from doing so, the court will be able to provide witnesses a sense of justice, but it's difficult," Ellis said.

Saljic said the courtroom fireworks demonstrated that Mladic is not mentally fit to stand trial.

"Let them now see for themselves his behavior and let them decide accordingly," Saljic told The Associated Press in Belgrade.

Saljic has said Mladic is not physically fit for the rigors of a long trial after suffering two strokes during nearly 16 years on the run as one of Europe's most-wanted fugitives.

Saljic added that he does not believe he could represent Mladic at the U.N. court because he does not speak English.

At his first hearing in June, Mladic enraged war survivors in the public gallery by looking at them and drawing his finger across his throat.

After entering the pleas, Orie adjourned the hearing without setting a date for trial or scheduling another hearing. It is likely any lawyers Mladic requests that meet the registry's requirements will be approved quickly, and then judges can set a date for the next pretrial hearing.

Orie told court-appointed lawyer Aleksander Aleksic that if he is able to communicate with Mladic, he should inform him of his not-guilty pleas and that he has the option of changing them at any time.

If convicted, Mladic could face a sentence of up to life in prison.

In Bosnia, hundreds of people gathered in the main square of the capital, Sarajevo, to watch a live broadcast of the hearing, cheering and shouting, "The monster is gone," as Mladic was escorted from the courtroom.

Mladic also is the alleged architect of a deadly campaign of sniping and shelling during a four-year siege of the city.

In Pale, a mountain village that was a Bosnian Serb stronghold during the war, veteran fighters defended Mladic.

"My commander, Gen. Ratko Mladic, is a Serb hero," said Novica Kapuran. "I think this is a shame, a shame on Judge Orie, on (The) Hague tribunal."