A major operation in Hama, a city with a history of militancy against the Assad regime, could lead to an outcry 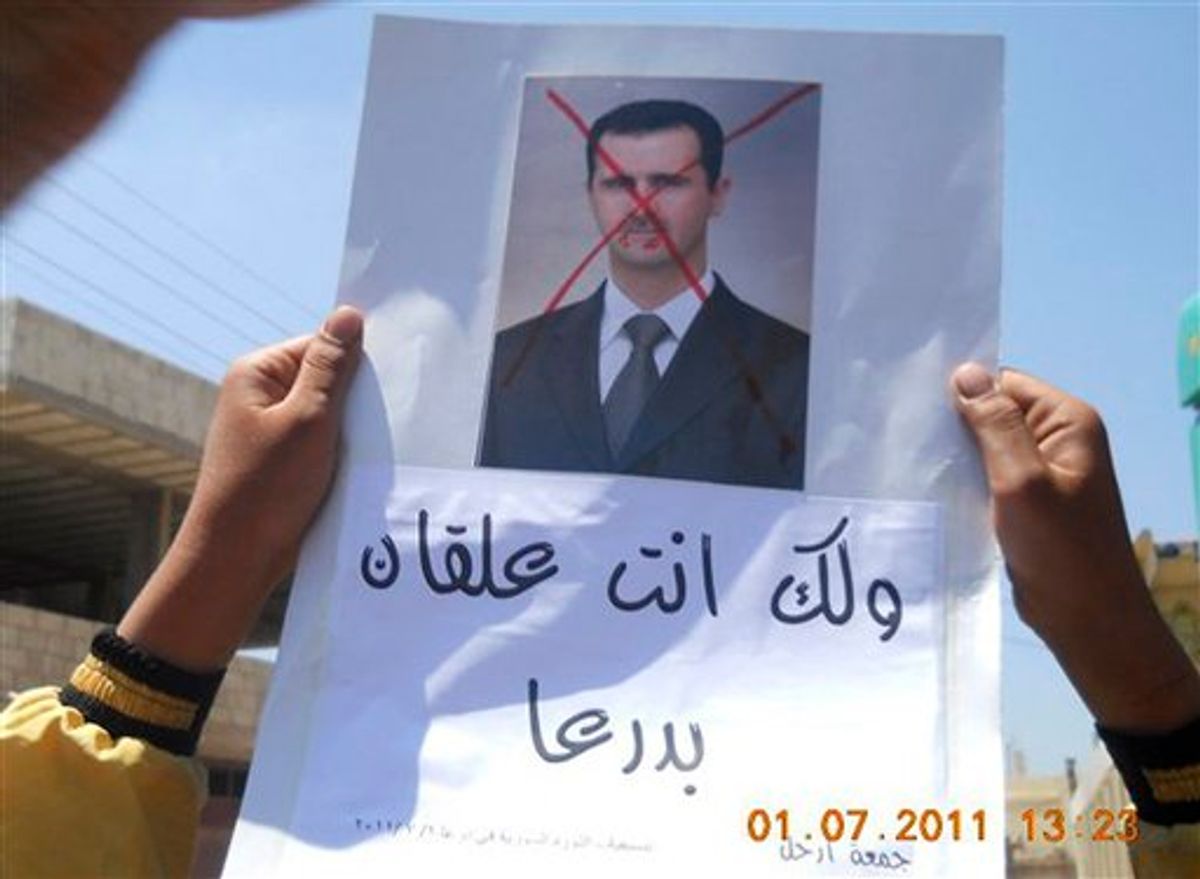 In this citizen journalism image made on a mobile phone and provided by Shaam News Network, anti-Syrian President Bashar Assad protester, holds up an Arabic placard read:"You are stuck in Daraa," during a demonstration against the Syrian regime, at Tafas village in Daraa province, southern Damascus, Syria, on Friday July 1, 2011. Hundreds of thousands of protesters flooded cities around Syria on Friday in one of the largest outpourings against the regime of President Bashar Assad since the uprisings began more than three months ago. At least six people were killed in various clashes, activists said. (AP Photo/Shaam News Network) EDITORIAL USE ONLY, NO SALES, THE ASSOCIATED PRESS IS UNABLE TO INDEPENDENTLY VERIFY THE AUTHENTICITY, CONTENT, LOCATION OR DATE OF THIS HANDOUT PHOTO (AP)
--

Syrian troops raided homes and made sweeping arrests in Hama on Monday, wounding at least 20 people before sealing off the city just days after about 300,000 protesters there held the largest demonstration since the uprising against President Bashar Assad erupted in mid-March, activists said.

Rami Abdul-Rahman, the London-based director of the Syrian Observatory for Human Rights, said he was told by Hama hospital officials that most of the wounded suffered shots from pump action rifles used by security forces.

A major operation in Hama, a city with a history of militancy against the Assad regime, could lead to an outcry.

In 1982, Assad's late father and predecessor, Hafez Assad, ordered his troops to crush a rebellion by Sunni fundamentalists, killing between 10,000 and 25,000 people, rights groups say.

"There is some kind of a siege on the city. They are closing all roads leading to Hama," said Syria-based rights activist Mustafa Osso.

Syria's state-run news agency hasn't said why the governor was dismissed. But some activists said they feared Abdul-Aziz, viewed as sympathetic to the demonstrators, was dismissed to give freer rein to the security forces in the city.

The troops moved out of Hama after a June 3 shootings there that killed 65 people. Since then, the streets had been fully under the sway of the opposition until Monday.

The Syrian Observatory for Human Rights said armed and security forces detained more than 20 people in some Hama neighborhoods early Monday. It said residents set up tires on fire and placed rocks in the streets in order to delay the movement of troops.

Earlier Monday, Syrian tanks rolled into a northwestern village and opened fire, wounding at least six people in the latest military maneuver in a weekslong siege near the Turkish border that seeks to crush the country's pro-democracy uprising, activists said.

The move in Kfar Roumah village came hours after security forces shot dead two anti-regime protesters and wounded eight late Sunday in the Damascus suburb of Hajar Aswad, according to Abdul-Rahman of the Syrian Observatory for Human Rights.

The uprising against Assad has proved remarkably resilient, lasting nearly four months despite a deadly government crackdown that has brought international condemnation and sanctions. Assad is facing the most serious challenge to his family's four-decade ruling dynasty in Syria.

Activists say security forces have killed more than 1,400 people -- most of them unarmed protesters -- since mid-March. The regime disputes the toll, blaming "armed thugs" and foreign conspirators for the unrest.

Syria has banned nearly all foreign media and restricted media coverage, making it nearly impossible to independently verify events on the ground. But witness accounts, including interviews with refugees who have fled to neighboring countries, indicate a brutal crackdown on the protest movement.

The latest Syrian troops' action in the northwestern region of Jabal al-Zawiya appeared to be aimed at preventing residents from fleeing to Turkey, where more than 10,000 Syrians have already taken shelter in refugee camps, activists say.

The refugees have been a source of deep embarrassment to Damascus, one of the most tightly controlled regimes in the Middle East.

Osso said another reason for the operations in Jabal al-Zawiya was a spate of defections by army officers and intense anti-government protests in the region.