My folks turned ironic children's shirts into big business. Their impact lasted -- even if the marriage didn't 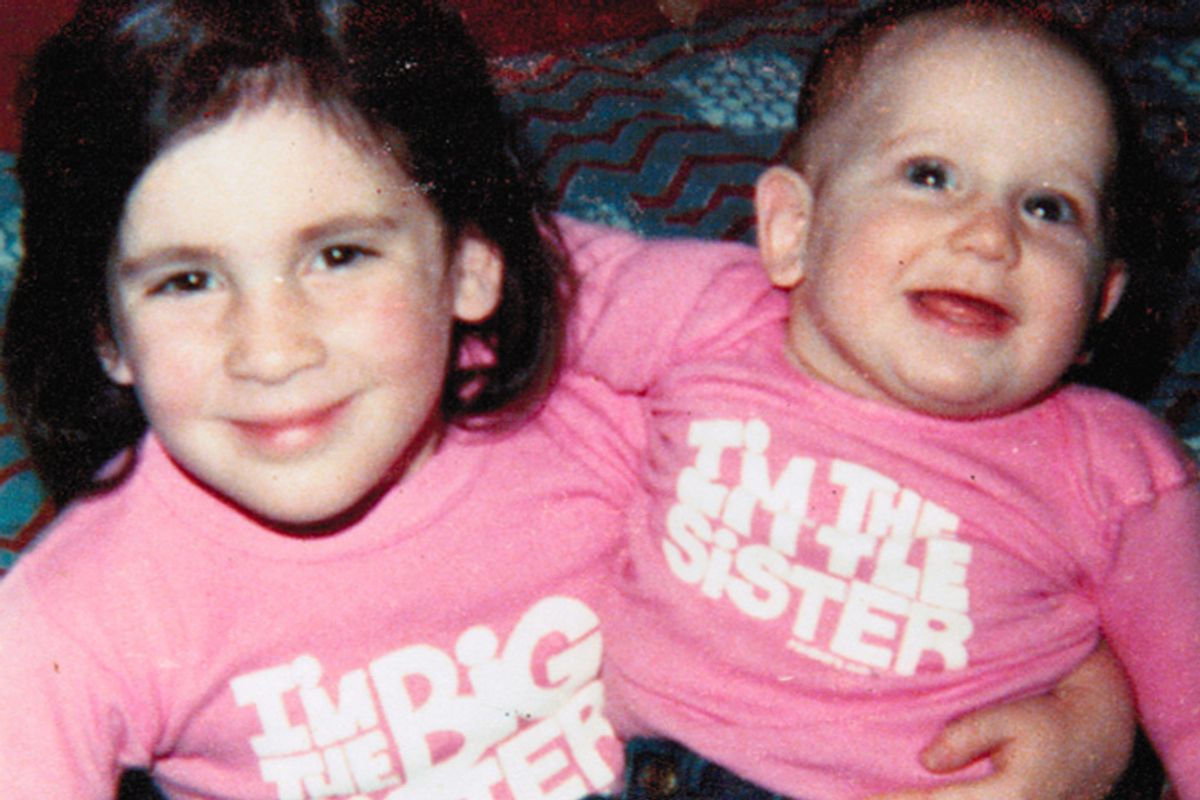 The author (right) and her sister.
--

When I was born in the late '70s, my parents mailed out a birth announcement to family and friends. It didn't contain a cloying poetic verse about their new "bundle of joy" but simply offered my vital stats in fuchsia ink along with an image of my tiny footprints. All unremarkable but for one small detail: They skipped the fussy handcrafted stationery and instead immortalized my arrival on infant-size silk-screened T-shirts.

The sweet keepsake, which I've saved in an Ikea box, along with childhood photos, feels thoroughly modern to me. It looks like something a young, proud -- and dare I say -- hip couple might order from an Etsy vendor. But to family and friends at the time, the memento reflected my parents' sensibilities. When I came onto the scene in 1978, all squishy and pink -- their second daughter -- my mother and father were already running a well-established million-dollar children's clothing business.

My parents invented the concept of what today we fondly call the "ironic kid's T-shirt." You can thank them for those silk-screened onesies with despondent statements like "Unemployed."

It may sound brash, but Firger's Fatigues produced thousands of tees well before underoos, the sticker-shock of American Apparel and, of course, the hipster parent phenomenon. It's been 25 years since their marriage -- and their homegrown company -- came to an end, but every time I walk into a boutique and see a toddler tee with a superhero insignia, I get a lump in my throat.

As a child, I climbed monkey bars in a soft cotton tee that simply read "Work Shirt." I was the rambunctious toddler who wore an "itsy-bitsy-teenie-weenie-yellow-polka dot-bikini" red tank top with a matching (polka dot) bathing suit bottom. My older sister, Alyssa, and I chased each other around our prewar Manhattan apartment in tees that bore a Wonder Woman or Superman emblem, and we were the very first children in America to sport "big sister" and "little sister" tees (a concept that remains a perennial bestseller among children's clothing manufacturers today). There I was at Riverside Park -- the baby with a droopy diaper in a shirt that read "Camp Kootchie Koo."

Of course, these days, novelty tees are a staple of kids' wardrobes. Who wants to be the schlubby friend at a baby shower with the burp clothes when you can get an expectant mother a tiny AC/DC tee? To me the irony lies not in the statement made by words or graphics, but rather, how widespread and mass-produced this free-thinking fashion expression has become. The clothes often feel as derivative as today's rock music.

But in the '70s, this new approach to kids' clothing, pioneered by my parents, wasn't about irony but rather optimism. Kids clothing had the potential to be less hideous. But also, a new generation of parents might just be able to raise their kids differently.

Back in my parents' nesting days, young boomers had few clothing options for their offspring. Comfortable cotton items easily found today at the Gap or Target were incredibly rare to come by. Only upwardly mobile mothers knew about European brands like Petit Bateau, managing to find the one fancy boutique in town that carried these well-made cotton separates and then stockpiling the clothes despite their price tag. Boutiques specializing in kids clothes had barely come into vogue.

Some young mothers still clung to preppy and fancy children's attire, perhaps a last vestige of the Kennedy Camelot days when children ought to look primed at any time to attend an inauguration.

But mostly, young parents in the early '70s dressed their kids in tried and true American brands. Among them, Healthtex, which had outfitted kids from infancy to early puberty since the 1920s. The brand name, somehow evocative of an HMO, offered up a promise of healthy clothing. By "healthy" the company meant durable, fashioned from man-made fabrics that would last. Before Firger's Fatigues, a cool item of kids' clothing was a pair of bell-bottoms that were most likely flammable.

"When I got into the business, the children's market was pink, blue, maize and very boring," my mother told Kids Fashions, the industry's trade magazine, in 1980.

It was the summer of 1974 when my parents accidentally ventured into the children's clothing business. Nixon had just resigned, though things wouldn't cool down in Vietnam for about another year. My parents, Vivian and Bruce, both recent graduates of Pratt Institute of Art in Brooklyn, were navigating life as newlyweds on the ungentrified Upper West Side. My mother was six months pregnant with my older sister when her boss suggested she take an unpaid leave and return to work after she had her baby. Furious, my mother quit. A women's coat designer by trade, she turned her attention to her daughter's impending arrival. She bought ribbons and fine fabrics to refurbish an antique cradle and plenty of toys. But -- as these narratives usually go -- she couldn't find any infant clothing she wanted to buy.

One day, more out of boredom than frustration, my mother found herself at the dining room table drawing a Superman logo with a magic marker on a baby underwear T-shirt. My mother had the sly, eccentric taste of an art student and the hard-won fashion sophistication of a girl who grew up embarrassed by her immigrant parents (she was the daughter of Polish refugees). But the impetus for this design was different. She'd later tell me she always loved the story of Superman, a variation on the biblical story of Moses, in which the mother saves her child by sending him away and the baby grows up to be a superhero.

But there was a problem. The markers bled and the lines looked too fuzzy.

This is where my father came in. He'd studied architecture in college and, one semester as an elective, he took a silk-screening class. At first my parents made T-shirts for friends who were newcomers to parenthood. Creativity came from my mother but my father always knew a good idea when he saw it.

Then my sister, Alyssa, was born. My father took regular trips down to the cheap Chinatown shops to purchase children's Hanes T-shirts in bulk. While Alyssa slept in the nursery my parents stayed up late into the night generating ideas for new designs and most likely listening to the Doobie Brothers.

One night during one of their epic brainstorming sessions my father took a pee break. He washed his hands and had two towel options, gifts from their wedding, for drying them: Mr. and Ms. That's when he says he realized they'd be perfect infant shirts.

My parents created a "Ms." shirt -- lifting the lettering directly from a new magazine that was making headlines -- and then silk-screened the logo on a powder-pink tee. (My father claims it took Gloria Steinem and company eight years to file a breach of copyright lawsuit against their company. Eventually, he also received a letter from Marvel Comics about the Superman tee.) The shirt was also perfect for my sister who, at the time, was balder than the average baby.

They created the companion boy's version in baby blue and sold their first dozen to a local entrepreneur who'd recently opened a children's clothing store. A few days later the man phoned my parents: He urgently needed more.

When it came time to name the company, my parents did employ a bit of irony themselves. My father had escaped the draft in college by sitting on his seat-belt buckle while driving to his army physical (enough to inflame his pilonidal cyst, which deemed him unfit for combat). But with the war over and hippies procreating at breakneck speed, it was only fitting: Firger's Fatigues.

Eventually, the company expanded beyond T-shirts. The clothing line now included overalls in khaki and denim with elasticized waistbands, "Fred Astaire" pleated trousers, boy scout and military jumpsuits and a great "Gay Nineties" number. The toddler-size silk pants and a tunic hearkened back to the refined fashion of the turn of the century and even gave a nod to the nascent disco era.

But there was another war to come, one that would put an end to their business and our family. I was 4 years old when my dad informed us he was moving out. I came home from my best friend's birthday party, wearing an olive and brown camouflage jumpsuit, a trademark piece from the House of Firger. My sister and I sat on the fuzzy brown couch. I watched my father cry for the first time. For once, my mother didn't.

In their divorce, my parents were very much of their generation. The messiness of the split lasted for years, well into the '80s. But I give them credit for knowing something previous generations of parents had not -- that they could no longer sustain a sense of tranquility for their kids in a thin-walled, two-bedroom apartment, no matter how loud the volume of their record player.

Now all that was left was a pile of T-shirts.

My father attempted to resurrect the business, but it was never the same. By then everyone had jumped on the cute, casual kids' clothing craze. It was difficult to distinguish his company -- now known as No Kidding -- from that of competitors. But also, he no longer had my mother, who turned his inspired ideas into fashionable reality. And, of course, the '80s ushered in plenty of alien fashion trends like acid wash, lace and a fluorescent day-glo palette. My father couldn't quite get behind these fads; eventually his company folded.

Surprisingly, the legacy that remains of their business hasn't left me cynical. Instead I consider myself slightly out of sorts. Unlike most of my peers, I select rattles and classic stuffed animals to give as baby gifts rather than clothes. And whenever I see a Superman T-shirt or a Made in Brooklyn infant onesie, I'm merely reminded of the optimism my parents once had -- a hope they shared with an entire generation -- that they might finally get it right.

Jessica Firger's work has been featured in Wall Street Journal, New York Times, Daily News, City Limits, BUST, Tablet, among others. She lives in Brooklyn. See more of her work at jessicafirger.com.