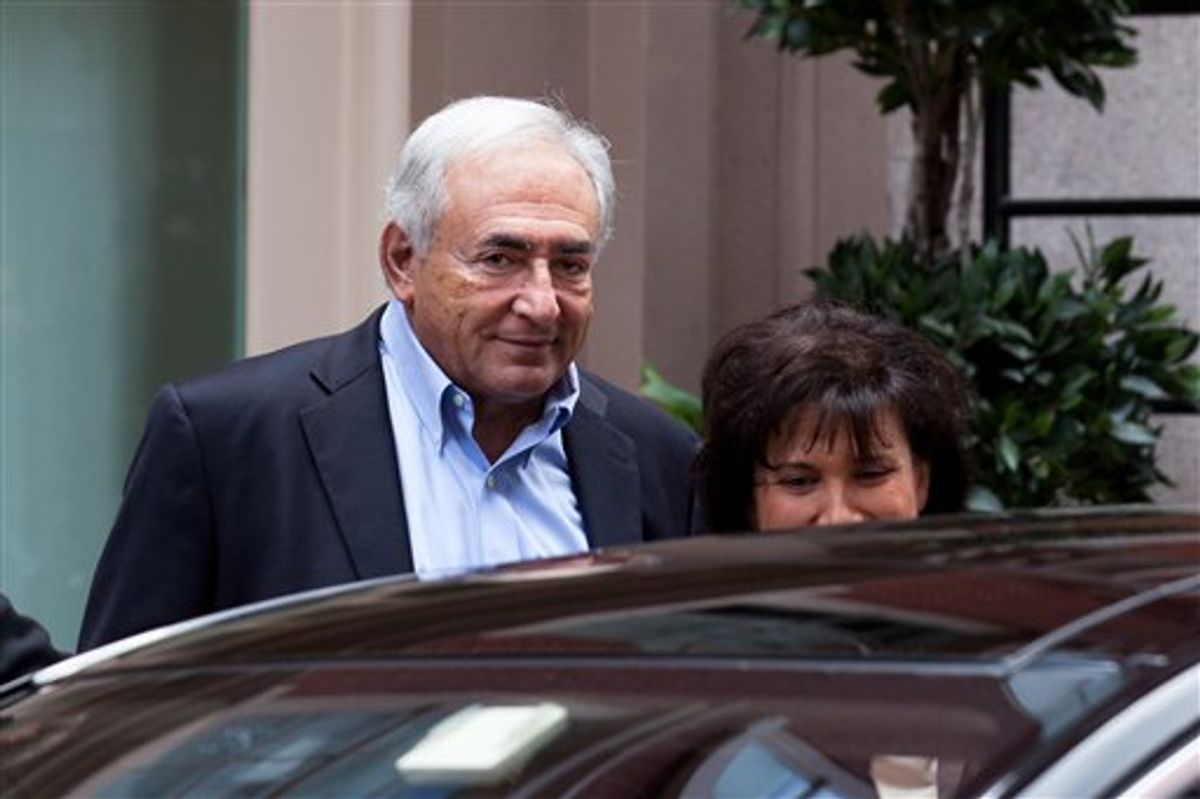 Former International Monetary Fund leader Dominique Strauss-Kahn leaves his temporary residence in Tribeca, Saturday, July 2, 2011, in New York. A judge released him Friday without bail or home confinement in the sexual assault case against him after prosecutors acknowledged serious questions about the credibility of the hotel maid who accused him of sexual assault. The criminal case against him stands. (AP Photo/John Minchillo) (AP)
--

Lawyers for Dominique Strauss-Kahn say they will file a slander complaint against a writer who accuses the former International Monetary Fund head of sexually assaulting her in 2002.

Tristane Banon, 31, says she plans to file a criminal complaint Tuesday accusing Strauss-Kahn of trying to rape her in 2002.

Strauss-Kahn's lawyers say in a statement Monday that Strauss-Kahn "has always said that the incident described by Ms Banon since 2007 is imaginary."

PARIS (AP) -- A French novelist will file a complaint on Tuesday accusing Dominique Strauss-Kahn of attempted rape, her lawyer said, raising the prospect of a new sex assault investigation starting just as the U.S. case against the former International Monetary Fund chief falters.

The announcement threw Strauss-Kahn's legal situation in his home country into question, and injected fresh uncertainty into a national debate about whether he will be able to return to his political career and enter the 2012 presidential race.

A sexual assault case against Strauss-Kahn in New York was badly weakened last week by prosecutors' publicly expressing doubts about the credibility of the hotel maid who accused him of forcing her to perform oral sex.

As a result, France was consumed Monday morning by the question of whether the longtime Socialist Party politician would -- or should -- revive his dream of running against unpopular conservative President Nicolas Sarkozy.

Strauss-Kahn's supporters suffered a new shock within hours, when the lawyer for writer and journalist Tristane Banon announced she planned to file the complaint in Paris within a day.

Banon, 31, said on a 2007 television show that she had been attacked five years earlier by a politician she had interviewed for a book. She later identified the man as Strauss-Kahn.

Lawyer David Koubbi said Banon had been dissuaded from filing charges by her mother, a regional councilor in Strauss-Kahn's Socialist party. Her mother, Anne Mansouret, admitted in a French television interview in May that she had urged her daughter not to file a complaint after the incident.

Banon came forward again after Strauss-Kahn's May 14 arrest in New York, but Koubbi said his client had no intention of pressing charges while the American prosecution was going on because the two cases should be kept separate.

Banon is now moving forward, Koubbi told The Associated Press. He denied that decision was connected to the weakening of the U.S. case.

"It is all the same to me what happens in the hours and days to come in the United States," he said.

Mansouret, a regional official in Normandy, did not respond to requests for comment.

Prosecutors could decide not to pursue the case if they find evidence Strauss-Kahn engaged in forcible sexual contact that fell short of attempted rape. The statute of limitations on the charge of "sexual assault" is three years, while attempted rape charges can be filed for as many as 10 years after the alleged crime.

Strauss-Kahn had been widely seen as the leading presidential contender in the months before his arrest, leading many polls.

Before the announcement of the new accusation, the country was split on whether it wanted Strauss-Kahn back in public life: two polls showed an almost even division between those who thought he should return, and those who believed his political career was over.

"DSK Back?" the left-leaning daily Liberation asked on its front page Monday.

Strauss-Kahn has relinquished his passport to authorities in New York. Another court hearing would be needed for him to get it back. His next appearance is scheduled for July 18 -- five days after the deadline for candidates to register in the Socialist Party primary.

"Let's acknowledge that if Strauss-Kahn decides to come back as a candidate on our side, no one will try to oppose him using some calendar," Socialist Party leader Martine Aubry said before Banon's announcement.

The Socialist Party's spokesman appeared to disagree, an indication of the confusion and disagreement within the party about betting the opposition's chances of defeating Sarkozy on a man seen by some as a martyr of American injustice and by others as an out-of-touch jet-setter with a history of crude behavior toward women.

"We can't base the (political) calendar, which involves millions of French people, on the American judicial calendar," party spokesman Benoit Hamon said Monday.

A poll released Monday found that 51 percent of French people found that Strauss-Kahn no longer had a political future, versus 42 percent who thought he did.

The telephone poll of 956 adults selected as a demographically representative sample was conducted July 1 and 2 by the Ipsos Public Affairs institute for the magazine Le Point. No margin of error was provided.

Another poll out Sunday conducted by Harris Interactive poll for the newspaper Le Parisien showed 49 percent of those surveyed saying 'yes' to the question "Without prejudging his innocence or guilt, do you want DSK to come back to the French political scene one day?"

At least some were won over by what they perceived as his mistreatment in the U.S.

"I had no intention of supporting him in the first round, but if he returns to French political life I will certainly vote for him," Jean-Rene Gendre, 63, said as he went shopping in central Paris. "What happened to him I think was a terrible manipulation."

Forty-five percent of respondents to the Harris poll said they didn't want Strauss-Kahn back in politics and six percent didn't answer the question. The agency asked a demographically representative group of 1,000 people 18 years old and older to fill out the July 1-2 online survey. No margin of error was provided.

Sarkozy's conservative allies have maintained virtually complete silence on Strauss-Kahn's arrest. But some appeared to be returning to the normal tenor of a political campaign.

Sarkozy has been assailed from the left for what some call his bling-bling image and tax policies that critics say favor the rich, in a country proud of its social welfare system and revolutionary past.

Strauss-Kahn had come under some criticism before his arrest for appearing in a friend's Porsche and for reports he wore highly expensive tailored suits.

After his arrest, he lived under house arrest in a $50,000 (euro34,500)-a-month town house in Manhattan's trendy TriBeCa neighborhood.

"Between his luxury tastes and other subjects, Dominique Strauss-Kahn has not offered a very positive image recently," Sports Minister Chantal Jouanno, a Sarkozy ally, said on Europe-1 radio.

Sylvie Corbet in Paris contributed to this report.