Republican contenders weigh in, sort of, on the trial of the century 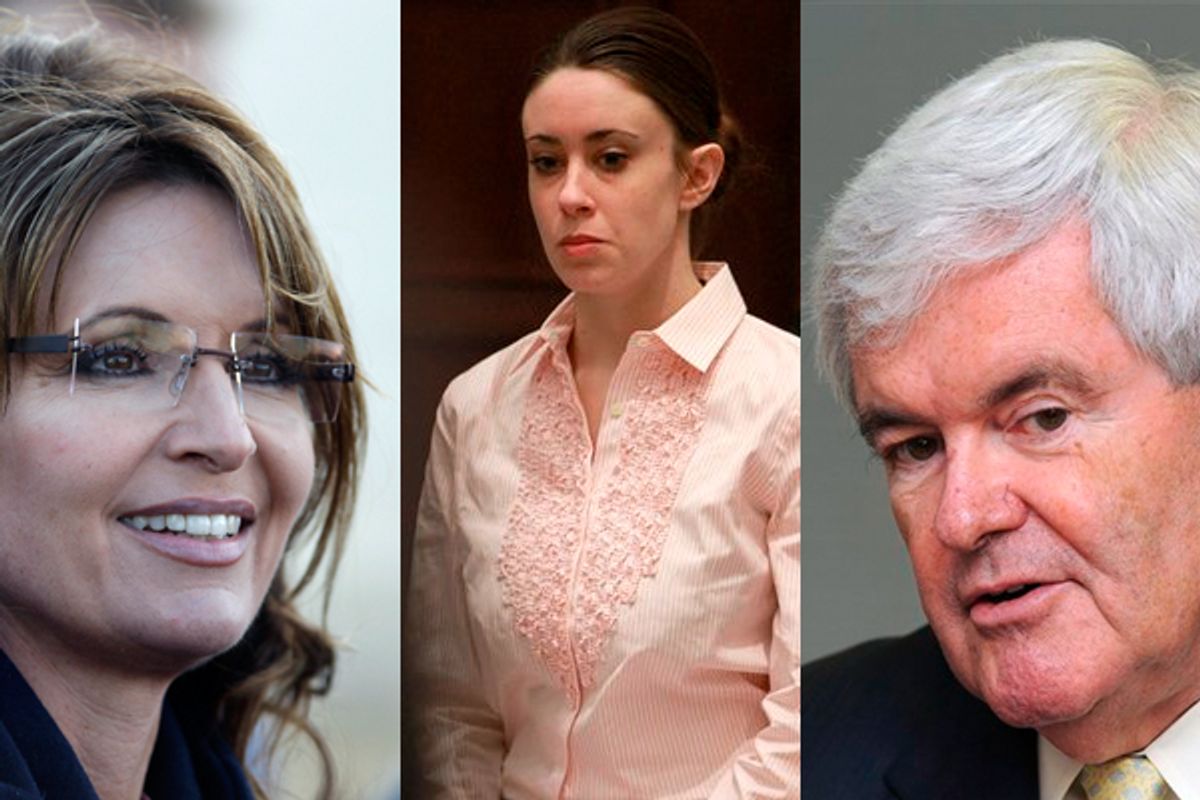 Because the Casey Anthony story was the only thing that happened in the news today, and because this is ostensibly "a blog about politics," I have rounded up (or possibly invented) the reactions of all the 2012 Republican contenders to the news of Casey Anthony's "not guilty" verdict. Mark Halperin said this trial could end up being a real game-changer that could also give or take away a given candidate's momentum, so it's important that we know where the candidates stand.

Mitt Romney
"Governor Romney offers his prayers to all victims of child abuse. The tragedy of the death of a small child shocks all decent Americans."
-- Romney spokesman Eric Fehrnstrom, in an email to Ben Smith.

Sarah Palin
Once again we see, with our nation in crisis, President Obama stands by and does idly nothing while an injustice is committed here in this glorious nation of ours. It's almost strange that the president has not yet made one statement on the issue of the death of young Caylee Anthony. Why the strange silence, Mr. President?
-- Sarah Palin
12,429 people like this.

Newt Gingrich
@newtgingrich
tragic to see justice not served. now is a great time to screen my and @CallyGingrich film Rediscovering God in America http://bit.ly/padmWP
51 minutes ago via web

Herman Cain
"I can promise you Casey Anthony and anyone else who I think might've killed their children will have no business in a Herman Cain administration. President Cain would look her right in the eyes and ask her point blank if she killed that little girl, we'd get right to the bottom of it."
-- Cain, addressing a Tea Party group in Iowa.

Michele Bachmann
BACHMANN: Well, I've been visiting all the primary states, and I've been talking to people, and people all over the place are asking me, why, in Barack Obama's America, someone who murders a baby who happens to be white doesn't get punished. And Sean, I've been on the front lines, and I know people are afraid not just of the massive debt created by the Pelosi-Reid government, they're worried about the Muslim Brotherhood, which has clear ties to terror groups dedicated to creating a worldwide Islamic caliphate, and they're worried that Eric Holder's Justice Department isn't going to do anything about it if the Brotherhood or another group comes for their children.

HANNITY: Very interesting stuff. Thanks for coming on, Congresswoman. We always appreciate it.

This is a rush transcript.

Tim Pawlenty
Gov. Pawlenty could not be reached for comment.