DSK case is no "victory for justice"

We've learned the alleged victim isn't a saint, but we still have no idea what happened in that hotel room 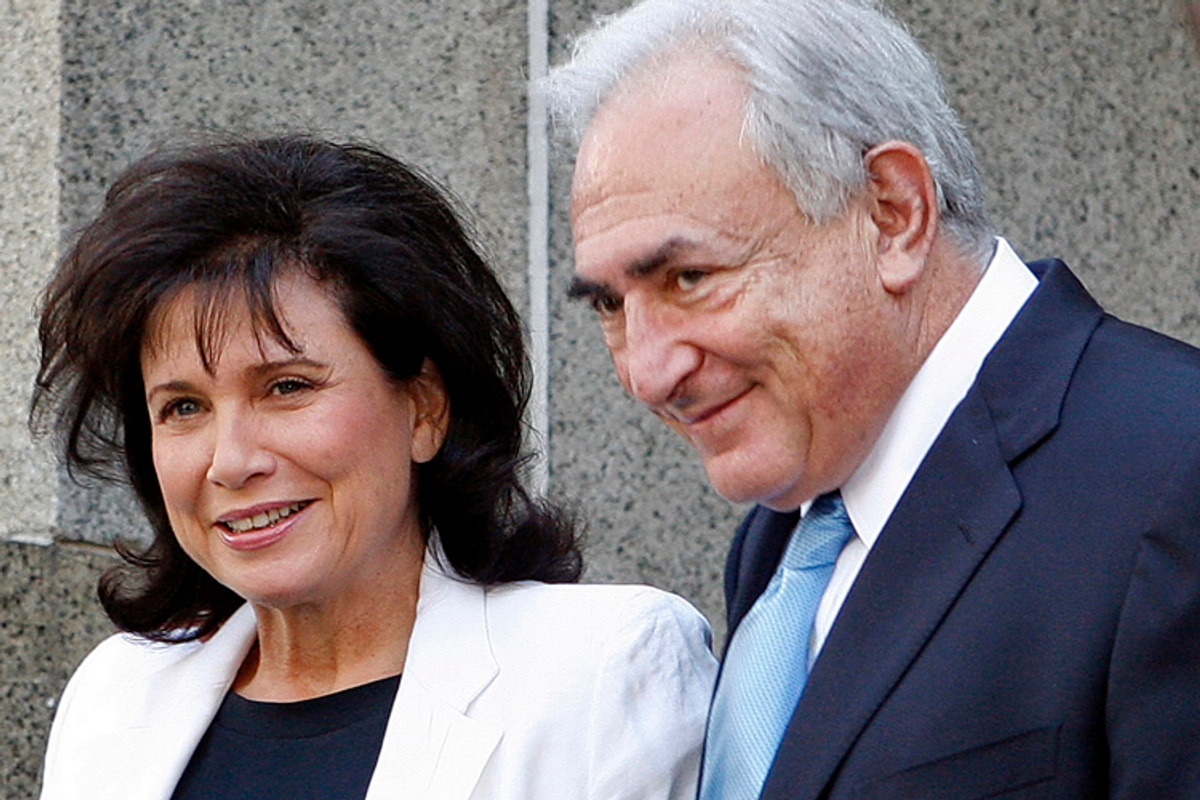 Rumor has it that New York City prosecutors are preparing to drop the charges against former IMF chief Dominique Strauss-Kahn. Last week, officials went to court to loosen the tight restrictions placed on Strauss-Kahn during a bail proceeding last month, citing new evidence that his accuser, a maid at the luxury Sofitel Hotel in Manhattan, had lied about several aspects of her life and her actions on the day of the alleged rape. While all the physical evidence points to a sexual encounter of some kind, it has devolved into a "he said, she said" case, unlikely to stand up in court.

The outcry has been predictable: The rich get no respect! Americans are prudes! Immigrant women lie about rape to stay in the country! She's a hooker! Why, we should give poor ole DSK the French presidency just to make up for all his suffering.

Behind the hyperbole, commentators seem determined to hold this up as a grand vindication of the American legal system, where all accused parties, rich or poor, black or white, are treated as equals by blindfolded Lady Justice, and where the government stands ever ready to admit its own mistakes. Says William Saletin at Slate.com:

The unraveling of the Strauss-Kahn prosecution is a victory for justice, because investigators found ways to check the accuser's credibility. Other accusers will pass such tests. This one didn't. What the collapse of this case proves is that it's possible to distinguish true rape accusations from false ones -- and that the government, having staked its reputation on an accuser's credibility, diligently investigated her and disclosed her lies. The system worked."

While the district attorney does deserve some props for investigating the maid's background and releasing the findings, let's not go about giving Cyrus Vance Jr. his Nobel Peace Prize quite yet. Justice is not income-blind. Dominique Strauss-Kahn, whose wife, Anne Sinclair, has an estimated net worth of $200 million, had his own investigators spread from the U.S. to Guinea digging up dirt on his accuser. These facts and allegations were bound to surface at some point. It was far better for the D.A. to rip the Band-Aid off, before it was ripped off for them. Strauss-Kahn is not the only one with a political future to ponder.

The story that is solidifying in the mind of the public is, if you'll pardon the expression, DSK's public-relations wet dream: that this grifter, this hooker, knew full well that he was rich and famous and in his room that afternoon, and that she got mad when he refused to pay her for the blow-job she delivered as part of her expanded turn-down service. So she cried rape in an attempt to blackmail him.

Perhaps. But it makes very little sense that a professional prostitute working the $3,000-a-night hotel circuit would risk that kind of exposure. Was she such a fabulous hooker that none of her wealthy tricks ever refused to pay her? With $100K in the bank, was she really so hard up for money that she wouldn't just write it off and move on to the next suite? And if this was a premeditated blackmail attempt, why would she cry rape within moments of the event? Why not just spit some DSK seed into a hankie and then threaten to call the cops -- or the media -- if he didn't pay up?

This is a woman who apparently spent most of her adult life flying below the radar, deftly playing the system and appearing to most of the world as a semi-impoverished, hard-working, devout Muslim widow and mother. Maybe this is giving her too much credit, but such a personal history suggests that she's at least smart enough to realize that once the police and the lawyers and the press get involved, she would no longer control her story.

When and if the facts are sorted out from the innuendo, assuming that ever happens, it will probably turn out that the maid is a front for drug smugglers operating out of her native Guinea, laundering money through her accounts and acting as a source for secure cellphones. And it is entirely possible that, as a side business, she polished more than the hotel's big brass-bed knobs. Her alleged statement to her incarcerated male friend, along the lines of, "Don't worry, this guy has a lot of money... I know what I'm doing," might be damning. Or it might be nothing more than an attempt to placate an unsavory character upset by her sudden involvement with the police.

An actual "victory for justice" would be establishing the truth of what happened in Suite 2806 of the Sofitel Hotel on the afternoon of May 14 and bringing any alleged crimes before a jury. Even if we take Strauss-Kahn at his word, he committed a crime that day: He solicited a prostitute.

We all know how this is likely to play out now: The indictment will be quietly dropped, Dominique Strauss-Kahn will pick up his life and perhaps even go on to run for the presidency of France, and the maid will be deported back in Guinea by the end of the year.

Maybe this is what justice looks like, but all in all, it seems like a very unsatisfying end to the story. Then again, it was never much of a fairy tale.