Standing up to hostage-takers 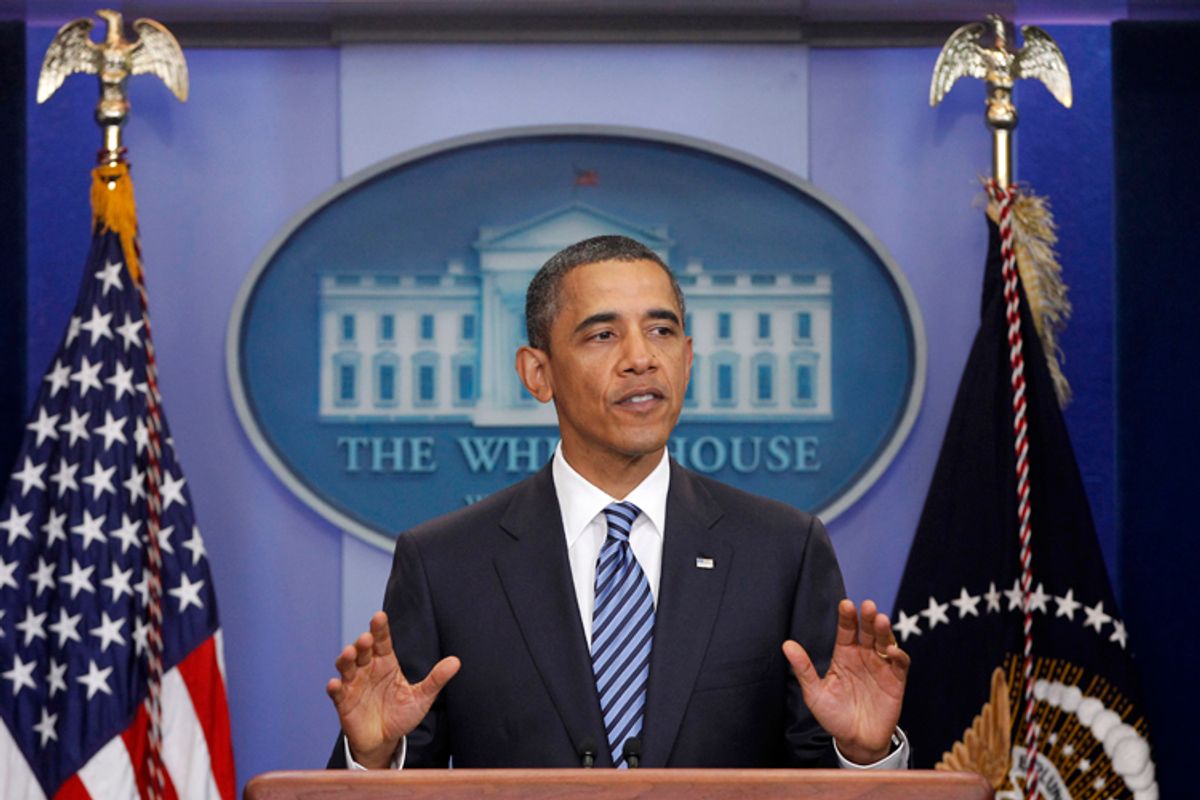 Over the weekend Massachussetts Gov. Deval Patrick had a fascinating op-ed in the Washington Post, describing a 2003 Harvard reunion with GOP anti-tax fanatic Grover Norquist (they were classmates). Norquist was bragging about creating a permanent Republican majority in America, and when some dreamer suggested there might be a Democrat in the White House again someday, Norquist made this promise: "We'll make it impossible for him to govern like a Democrat."

Norquist and his anti-tax jihadists made good on their word. President Obama is backing a debt ceiling "compromise" that is a fundamentally Republican, proposing $6 in spending cuts for every dollar in "revenue enhancement," and even the little bit it does in the tax code only closes loopholes; it doesn't touch tax rates, even on top earners. (But former Joe Biden economic advisor Jared Bernstein laid out a way to raise $1 trillion in revenue without even touching tax rates, and it's worth a look.) The GOP insists that closing tax loopholes must be paid for with a cut in tax rates, so the plan can stay "revenue neutral" – which is central to the "No Taxes Pledge" Norquist makes Republicans sign in blood. The wealthy in this country, along with corporations, now pay the lowest effective tax rates than they have for 50 years – and some still want more.

The debt-ceiling vote has been a routine Congressional process for a long time; it happened seven times under George W. Bush with little or no protest. Now the GOP has made it an occasion to take the economy hostage, knowing that the consequences of default are so high – much more interest on the debt we owe, an inability to borrow more, plus draconian government program shutdowns -- the president may be unable to win their game of chicken. The way the game looks now – and it is a game to the GOP – they win, whatever happens.

If the GOP won't agree to the fundamentally Republican deficit-reduction plan Democrats have reportedly offered, with its 6:1 cuts to "revenue enhancement" ratio, one of two things happen: Either the president caves and makes the deficit cuts entirely on the spending side – which will hurt the economy as well as devastate seniors, veterans and poor and middle class families who rely on goverment services. Or he stands up to the hostage-takers and the nation defaults. The economic chaos that follows won't merely mean he can't govern like a Democrat, but that he can't govern at all. Conservative David Brooks, belatedly alarmed at the crazies who have hijacked his party, thinks GOP intransigence hurts the party and that outraged Americans would embrace Democrats in the event of a default, but I'm not sure. I think any increase in Americans' economic pain is bad for the party in power, and Obama and the Democrats will get blamed, almost regardless of the cause.

I go back and forth between frustration at the president's failure to stand up for Democratic principles, and respect for his courage, given that he's dealing with political and economic terrorists. They are not afraid to destroy the economy to win more tax breaks for the wealthiest Americans – in fact, I believe at least some of them believe destroying the economy is another way to win in 2012.

Remember when John Boehner told the New Yorker after the election that raising the debt ceiling was going to be the first test of his new majority, where they proved they could govern? The vote would be the new House majority’s “first really big adult moment.” Boehner said. “We’ll have to find a way to help educate members and help people understand the serious problem that would exist if we didn’t do it.”

By April, after he forced more program cuts on President Obama, in exchange for averting a government shutdown, Boehner didn't sound like an adult anymore. Any debt ceiling bill would be chock full of program cuts, he warned. "The president says I want you to send me a clean bill. Well guess what, Mr. President: Not a chance you’re going to get a clean bill," Boehner told a Connecticut fundraiser. "There will not be an increase in the debt limit without something really, really big attached to it."

David Frum blames the standoff partly on Republican extremism, but also on Obama's conciliatory negotiating style, in which he opens every discussion telegraphing his readiness to compromise and offers too much right away. Frum (and others) point to a missed opportunity to slip the debt ceiling vote into the December deal to extend all Bush-era tax cuts in exchange for unemployment insurance extension and a payroll tax holiday. The Atlantic's Mark Ambinder asked Obama why he hadn't forced the deal into the package (at that point we were supposed to reach the debt ceiling in early spring). The president's response is telling:

THE PRESIDENT: When you say it would seem they’ll have a significant amount of leverage over the White House, what do you mean?

THE PRESIDENT: Look, here’s my expectation — and I’ll take John Boehner at his word — that nobody, Democrat or Republican, is willing to see the full faith and credit of the United States government collapse, that that would not be a good thing to happen. And so I think that there will be significant discussions about the debt limit vote. That’s something that nobody ever likes to vote on. But once John Boehner is sworn in as Speaker, then he’s going to have responsibilities to govern. You can’t just stand on the sidelines and be a bomb thrower.

And so my expectation is, is that we will have tough negotiations around the budget, but that ultimately we can arrive at a position that is keeping the government open, keeping Social Security checks going out, keeping veterans services being provided, but at the same time is prudent when it comes to taxpayer dollars.

This is the same John Boehner, by the way, who announced he was opposing the 2009 stimulus bill a week into Obama's presidency – and on the eve of a meeting where the two men were going to discuss what was in the bill. Obama compromised and settled for a stimulus that was maybe half as big as needed and included tax cuts for the middle class – and he still got no House Republican votes. How, two years later, he could say Boehner "can't just stand on the sidelines and be a bomb thrower" is beyond me.

By the way, Boehner, that towering figure of rectitude, just claimed the "American people won't stand for" a debt-ceiling deal that "increased taxes" by ending loopholes for corporate jet owners. In fact, every poll I've seen shows that Americans believe a deal should include tax hikes and spending cuts.

Obama never publicly branded the debt ceiling as "if the Republicans force this country into bankruptcy." He issued no public call to constituencies like the financial industry to bring pressure to bear on the issue. He did not warn that he would manage any crisis in ways that Republicans would not like. ("If the Republicans in Congress deny me the authority to pay everybody, then I'm going to have to choose some priorities. I don't think it's likely that Texas-based defense contractors will find themselves at the top of my list.")

Instead, he appealed again and again to Republicans' spirit of responsibility. Good luck with that.

Obama assumed office with two interrelated theories of how he'd make change. He believed first, that Americans craved bipartisanship because they wanted an end to gridlock, and second, that it was possible to get Republicans to partner with him to do that. I never thought either thing. "Gridlock" is the kind of process issue Obama likes to talk about, but Americans rarely care about process, they want progress, and problems solved. So if bipartisan compromise -- or the appearance of compromise, caving even though Republicans don't support you anyway – doesn't solve the problems, Democrats won't be rewarded for simply making a deal. In one key example, the administration knew the stimulus was too small, it contained one-third tax cuts, but they wanted to keep it under $1 trillion. At $787 billion,  it saved us from a depression, but we hit 10 percent unemployment on the eve of the midterms – it's 9.1 percent now – and the Democrats took the fall.

Meanwhile the so-called recovery isn't reaching beyond the rich. Out of all the economic growth corporations have seen since the nominal recovery began in 2009, only 1 percent has gone to wages -- 88 percent went to corporate profits, according to this Northwestern University study.  And CEO pay jumped 23 percent in 2010. We are not broke; we are a wealthy country. Poverty afflicts our political culture. President Obama has a very hard road ahead. If he rewards hostage takers, it's hard to imagine where they'll stop.

We discussed this mess on MSNBC's "Hardball" Monday night: