The three fundamentalisms of the American right 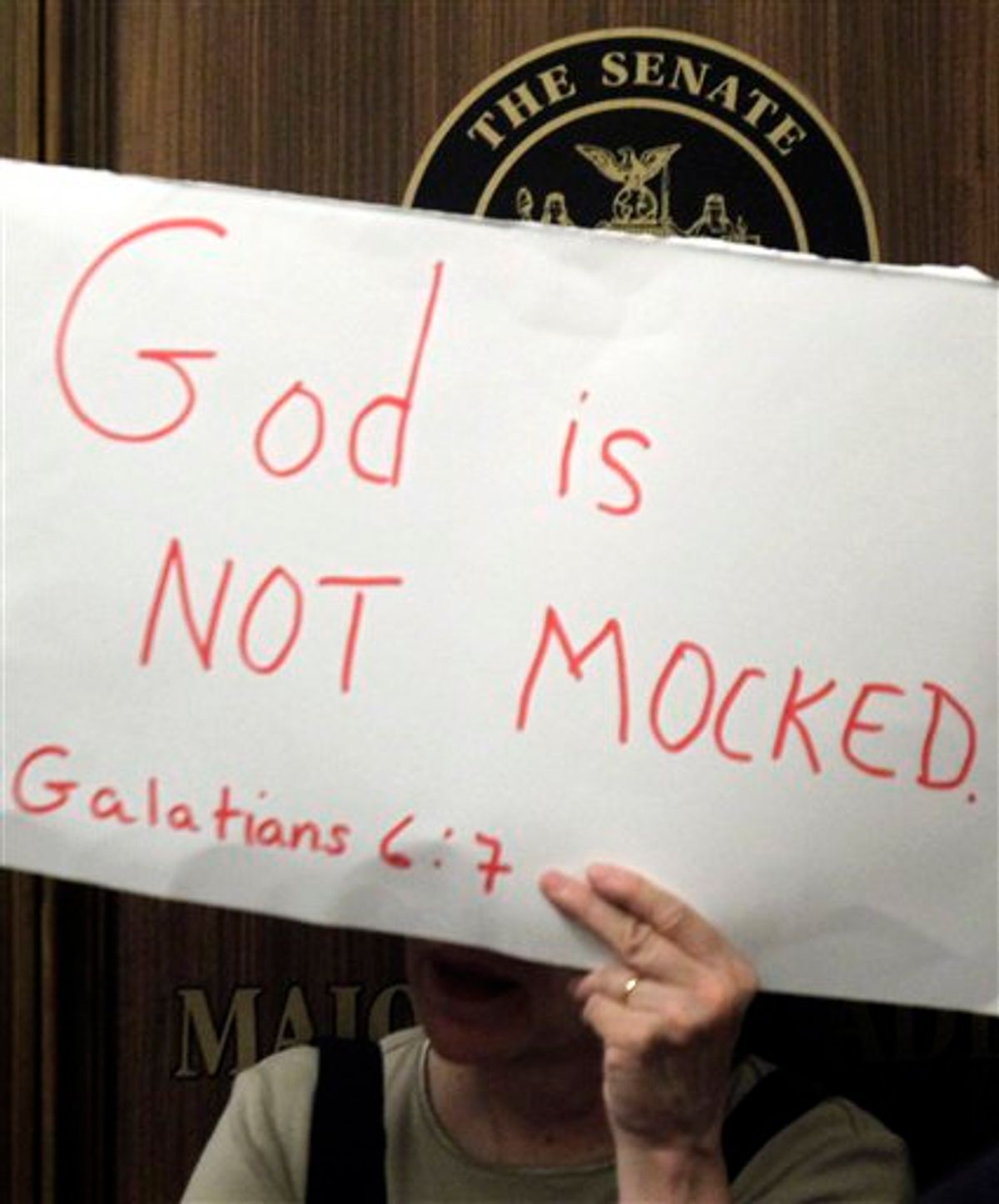 A woman holds a sign as supporters and opponents of gay marriage rallied in a hallway outside a Republican conference room at the Capitol in Albany, N.Y., on Wednesday, June 22, 2011. Senate leader Dean Skelos and Assembly Speaker Sheldon Silver agree they are working through the proposed additional religious protections that could bring a gay marriage bill to the Senate floor. No deal was struck. But both leaders say progress is being made and no major obstacles to agreement on the provisions is in sight. (AP Photo/Mike Groll) (AP)
--

In contradiction to the hostility to Darwinism shared by many of its constituents, the American right is evolving rapidly before our eyes. The project of creating an American version of Burkean conservatism has collapsed. What has replaced it is best described as triple fundamentalism -- a synthesis of Biblical fundamentalism, constitutional fundamentalism and market fundamentalism.

Following World War II, the American right was a miscellany of marginal, embittered subcultures -- anti-New Dealers, isolationists, paranoid anticommunists, anti-semites and white supremacists. Russell Kirk and others associated with William F. Buckley Jr.'s National Review sought to Americanize a version of high-toned British Burkean conservatism. While the eighteenth century British parliamentarian was embraced by conservatives for his opposition to the French Revolution, Edmund Burke, a champion of the rights of Britain’s Indian, Irish and American subjects, could also be claimed by liberals like Yale Law School’s Alexander Bickel, who preferred gradual, cautious reform to radical social experimentation. In its liberal as in its conservative forms, Burkeanism disdains reaction and radicalism alike, and favors change in lesser things when necessary to maintain the continuity of more fundamental institutions and values.

The religious equivalent of Burkean politics is orthodoxy, not fundamentalism. Orthodoxy means the continuity of a tradition, as interpreted by an authoritative body of experts, such as priests, rabbis or mullahs. The term "fundamentalism" originated in the early twentieth century as a description of reactionary evangelical Protestants in the U.S. who rejected liberal Protestantism and modern evolutionary science and insisted on the inerrancy of the Bible. The phrase is nowadays applied indiscriminately and often inaccurately to various religious movements, some of which, in the Catholic, Jewish and Muslim traditions are better described as ultra-orthodox.

America’s Burkean conservatives like Kirk tended to favor Catholicism or the Anglo-Catholic school within the Anglican church. For them, establishment and hierarchy were terms of praise. But once white Southerners captured the Republican party and the conservative movement, the High Church right that found Kirk and Buckley among its college of cardinals gave way to the political equivalent of the Foot-Washin’ Baptists.

Today Protestant fundamentalism is associated with the Scots-Irish in the Bible Belt from West Virginia to Texas, but its ancestry lies in now-secular New England and the Midwest and it migrated southward only after the Civil War. As Burke observed at the time of the American revolution:

"All Protestantism…is a sort of dissent. But the religion most prevalent in our northern colonies is a refinement on the principle of resistance: it is the dissidence of dissent and the protestantism of the Protestant religion."

It is also the populism of Populism. As an intermediary between the soul and God, the church hierarchy has been all but replaced by the Bible in fundamentalist Protestantism. Nor is there any need for theologians to expound the Bible, which was conveniently written in English so that it can be understood by any plain American.

"There’s only one book you ever need to read," a Bible-believin' Texan Baptist once assured me. He was two books short of a populist conservative bookshelf. But in the age of post-intellectual, fundamentalist conservatism, three books are sufficient to make anyone the equal of the most erudite intellectual. The books need not actually be read, and for the most part probably are not; it is enough, in argument, to thump the Bible, and to thump "The Road to Serfdom" and "Atlas Shrugged," too.

The mentality of fundamentalism, not Burkean conservative traditionalism, underlies the rewriting of American constitutional history by the Straussians associated with the Claremont Institute in Cailfornia and of American economic history by conservative propagandists like Amity Shlaes. Burkeans viewed the history of British and American freedom as a gradually unfolding process of -- dare it be said?--evolution, in which useful innovations, after suitable probation, could be incorporated as elements of the tradition. This "Catholic" view of political history is incompatible with the "Protestant" view of right-wing political fundamentalism, which transfers the script of radical Protestantism to the realms of political history and economics.

History, to the fundamentalist mind, is a story of original perfection, followed by betrayal and restoration. The early Christian church was perfect; it was corrupted and betrayed by medieval Catholicism; and it was restored to its original purity by radical Protestant reformers. In the same way, the American constitution was not a flawed compromise among rival states and factions, to be improved by later amendment, but a document of superhuman wisdom, created in a kind of secular Pentecost at Philadelphia in the summer of 1787. To believe today’s constitutional fundamentalists, the true constitution was betrayed around 1900 in the name of the "living constitution" by progressives and liberals, who play the villain’s role in political history that the evangelicals assign to the Catholic Church in Christian history.

Modern American market fundamentalism, too, is recognizably modeled on the fundamentalist Protestant version of church history, even though market fundamentalists need not be Christian conservatives. Ignoring the long history of tariffs, land grants, military procurement and mixed public-private corporations in the United States, the market fundamentalists pretend that the U.S. was governed by the laws of the market until Franklin D. Roosevelt’s New Deal replaced capitalism with socialism (or statism, or fascism, or whatever Amity Shlaes or Jonah Goldberg want to call it). Russell Kirk wrote that any true conservative would be a socialist before he would be a libertarian. But then he was a Burkean High Church conservative.

The rise of triple fundamentalism on the American right creates a crisis of political discourse in the United States. Back when conservatism was orthodox and traditional, rather than fundamentalist and counter-revolutionary, conservatives could engage in friendly debates with liberals, and minds on both sides could now and then be changed. But if your sect alone understands the True Religion and the True Constitution and the Laws of the Market, then there is no point in debate. All those who disagree with you are heretics, to be defeated, whether or not they are converted.

For their part, progressives have no idea of how to respond to the emergent right’s triple fundamentalism. Today it is the left, not the right, that is Burkean in America. Modern American liberalism is disillusioned, to the point of defeatism, by the frustration of the utopian hopes of 1960s liberalism in the Age of Reagan that followed and has not yet ended. Today it is liberals, not conservatives, who tend to be cautious and incremental and skeptical to a fault about the prospects for reform, while it is the right that wants to blow up the U.S. economy and start all over, on the basis of the doctrines of two Austrian professors and a Russian émigré novelist. Barack Obama, who would have flourished in an age when conservatives and liberals shared a common Burkean sensibility, finds himself as baffled and flustered by the tribunes of the Tea Party as Edmund Burke would have been by the young Marjoe Gortner.

The era of triple fundamentalism on the American right is bound to come to an end. Sooner or later, dogmatism and reality will collide, and it is not reality that will crumple like tinfoil. The only question is how much damage will be done to the American polity before the revolution of the saints fizzles out.