The roots of Minnesota's staring contest 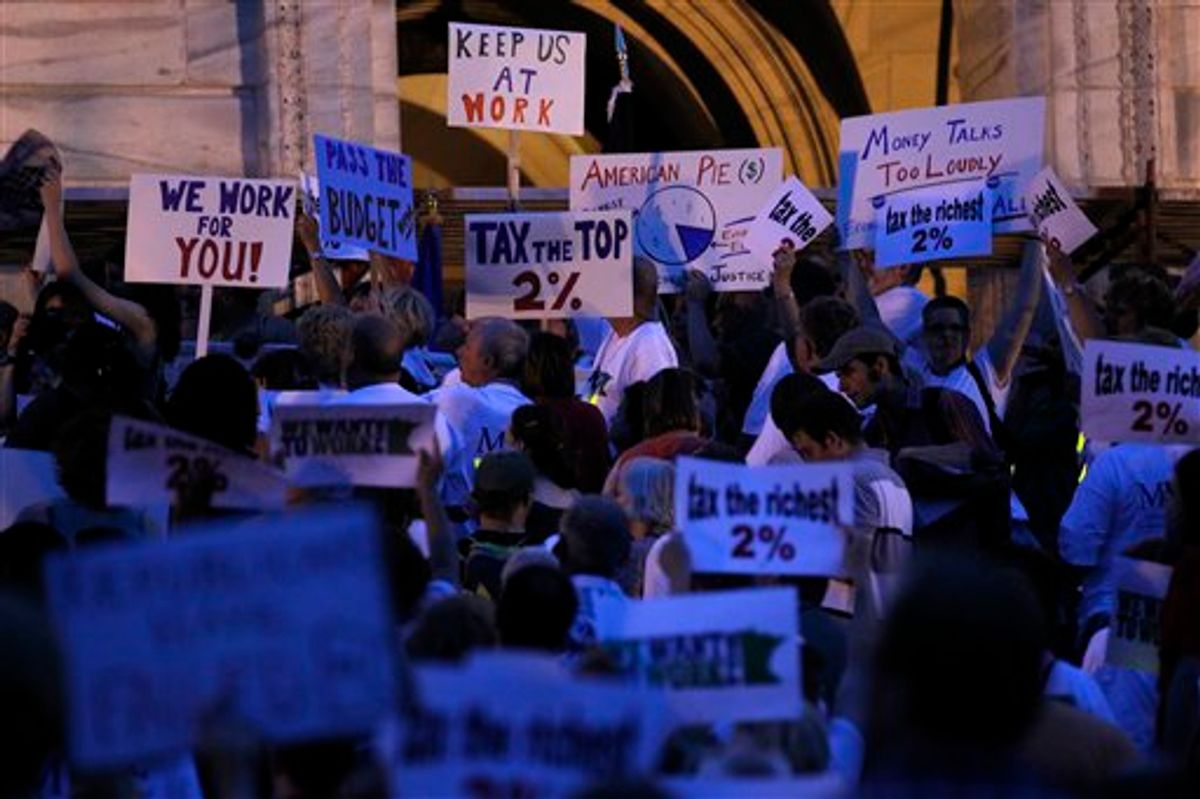 Members of the Minnesota Association of Professional Employees, and the American Federation of State, County and Municipal Employees and their supporters attended a vigil at the State Capitol steps in St. Paul, Minn on Thursday night June 30, 2011. Minnesota stumbled into its second government shutdown in six years on Thursday, with a partisan divide over taxes and spending to close a $5 billion deficit becoming only more bitter as a midnight deadline came and went without agreement. (AP Photo/Carlos Gonzalez - Star Tribune) MANDATORY CREDIT (AP)
--

There’s an understandable tendency to assume that voters use elections to send very specific messages about what they do and don’t want their leaders to do.

But the events playing out now in Minnesota, where the state government has been closed since last Friday, provide a powerful illustration of just how foolish this thinking can be. The shutdown is less the result of failed negotiations between Democratic Governor Mark Dayton and leaders of the Republican-controlled legislature and more the product of two radically different interpretations of last fall’s election.

Dayton, after all, rode to a rather improbable victory in 2010 while promising to push for higher taxes on the wealthy. And it is his insistence on sticking to that pledge that is at the heart of his current standoff with Republicans. Dayton’s final offer to the GOP before the shutdown was for a tax increase on the state’s 7,700 millionaires -- the top 0.03 percent of income earners -- that would lessen the severity of cuts to education and social service programs. This posture is entirely consistent with the platform Dayton ran on last year.

But Republicans are also being consistent in their refusal to agree to any kind of a tax hike. Just as we saw across the country, the fanatically anti-tax Tea Party helped push the Minnesota Republican Party to the right in 2009 and 2010. On the same day that Dayton was elected governor last November, Republicans picked up 16 seats in the state Senate and 25 in the state House of Representatives -- handing the party control of both chambers. (It marked the first time in the modern era that the GOP had won control of the Senate.) This result, one of the GOP's new legislative leaders immediately declared, represented a mandate to "reject job-killing tax increases."

In other words, the same pool of Minnesota voters used the same election to empower two fundamentally different governing philosophies. The result is hardly surprising. Dayton is sticking to the principles that he was elected on and so are the GOP’s legislators, and both sides can tell themselves that they’re being true to the message that Minnesota’s voters delivered in 2010.

How could this be? Actually, it makes sense when you realize how little the specific policy prescriptions of each party had to do with the 2010 election, in Minnesota and elsewhere.

For instance, the GOP tide in Minnesota’s state legislative elections is best understood as the product of three main factors. There was the dreadful economy, which created (and continues to create) profound anxiety among voters -- anxiety that translated into a desire to vote against the status quo. And in 2010, the status quo was represented by Barack Obama and the Democratic Party; the same Minnesota voters who turned out to send Obama and his party a message checked off Republican candidate names all the way down the ballot. There was also a ton of low-hanging fruit. Thanks to solid Democratic years in 2006 and 2008, dozens of marginal state legislative seats were ripe for the taking by Republicans.

The best thing that most GOP candidates in Minnesota had going for them in 2010 was the fact they were running as Republicans in a year in which voters were strongly inclined to vote against Democrats. In many ways, their platform was irrelevant. This was true of Republican candidates across the country, too. (And it was hardly a new phenomenon; Democrats have benefited from similar conditions in other midterm years, like 2006 and 1982.)

But it would be equally misleading to suggest that Dayton’s platform was any more important to his success last year. Yes, his victory was improbable. A former one-term senator who was labeled one of that chamber’s five worst members by Time in 2006, Dayton was not exactly the favorite of the Minnesota Democratic establishment when he set out to run for governor. But his own deep pockets and lingering name recognition propelled him to a narrow win (with 41 percent of the vote) in a crowded Democratic primary.

Then he got lucky, with the GOP’s base insisting on nominating a polarizing gubernatorial candidate, Tom Emmer, who had received an endorsement from Sarah Palin in the run-up to the Republican primary. The spotlight that comes with a statewide campaign made it difficult for Emmer to function as a generic Republican candidate, something swing voters might have been inclined to support . The race was personalized and Emmer ended up losing potential support to an independent candidate with ties to the state’s more moderate, old guard Republican establishment. Consequently, Dayton managed to win with just 43 percent of the vote -- a 9,000-vote margin that said much more about his opponent’s deficiencies than it did about his own platform. (It also helped Dayton's cause that Democrats had been locked out of the governorship for 20 years.)

Minnesotans probably didn’t mean to put in place the perfect ingredients for a government shutdown when they went to the polls last November, but they did. Now the question is how they will react. Dayton is betting that they will blame the GOP for protecting the rich at the expense of everyone else, thereby compelling Republicans to budge on their "just say no" tax posture. Maybe they will -- or maybe they’ll blame Dayton, or maybe the split will be 50/50. But if the governor is right, it could provide a potentially helpful blueprint for Barack Obama, who is now locked in a staring contest over the debt ceiling with what is essentially a national version of the Minnesota state Legislature.

I was on MSNBC's "The Last Word" and discussed the Minnesota shutdown with Chris Hayes on Friday night: