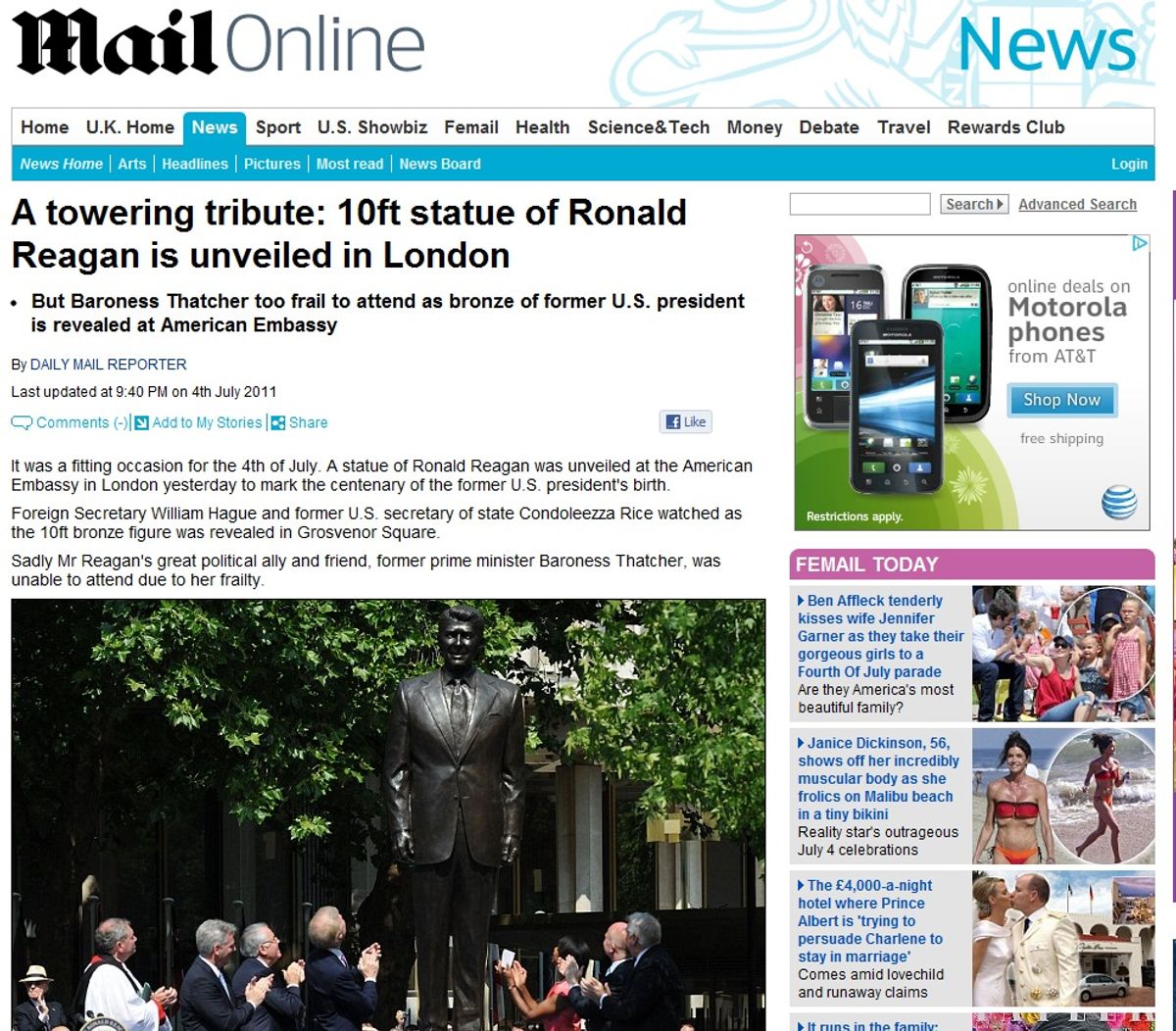 After various millionaires and billionaires crashed the entire world economy, governments worldwide are imposing "austerity measures" designed to punish impoverished recipients of direct government aid and middle-class public employees for their crimes against the international economic consensus. ("Gubmint too big!!!" -The Economist.) In nations where trade unions are actually a major force for the rights of workers and not a depressing relic, there are massive protests. In Great Britain, a one-day strike brought 750,000 people to the streets. Also, London just got an awesome, brand-new 10-foot-tall statue of Ronald Reagan!

The statue will "stand alongside statues of other American presidents such as Franklin D Roosevelt and Dwight D Eisenhower," a couple of guys who actually helped the U.K. survive a world war.

The U.K. government didn't pay for the million-dollar Reagan statue. It's at the U.S. Embassy, and the Ronald Reagan Presidential Foundation footed the bill. But it's still so poetically apt that we gave them this gift just as the Tory government (which, to be fair, is far to the left of both of our own parties) attempts to install a plan that would have workers contribute more to their pensions while receiving less in return, painted as a necessity in this dire worldwide economic slowdown, which was not actually  caused by the pensions of people who work for a living.

Ronald Reagan was the genius who discovered that there's no political punishment for slashing taxes on the wealthy, deregulating the massive casino they pretend is a productive financial industry, and then declaring that the "free ride" for poor folk and the publicly employed middle class is over. Because he did hire a couple reasonably responsible people, he was forced to re-raise taxes after his first tax cuts began ballooning the deficit that justified his hard stance against people like air traffic controllers, but his story -- that jobs will be created if the wealthy are allowed to do whatever the hell they want, and that the government can't afford to keep promises made to employees or poor people -- never changed. And it influenced right-wing governments eveywhere.

There's no punishment for blaming a bunch of public employees for government shortfalls and economic downturns caused by millionaires and billionaires, because during such a downturn, all the people whose lives go to hell resent people with safe jobs and good pensions even more than they resent the distant, amorphous rich bankers who caused the problem.

As in America, the U.K.'s opposition party is too spineless and terrified of ancient memories of the '70s to put forth any  opposing narrative.