Where have all the illegal immigrants gone?

Good news for American workers: Mexicans are staying home, and the Chinese are eating a lot of California nuts 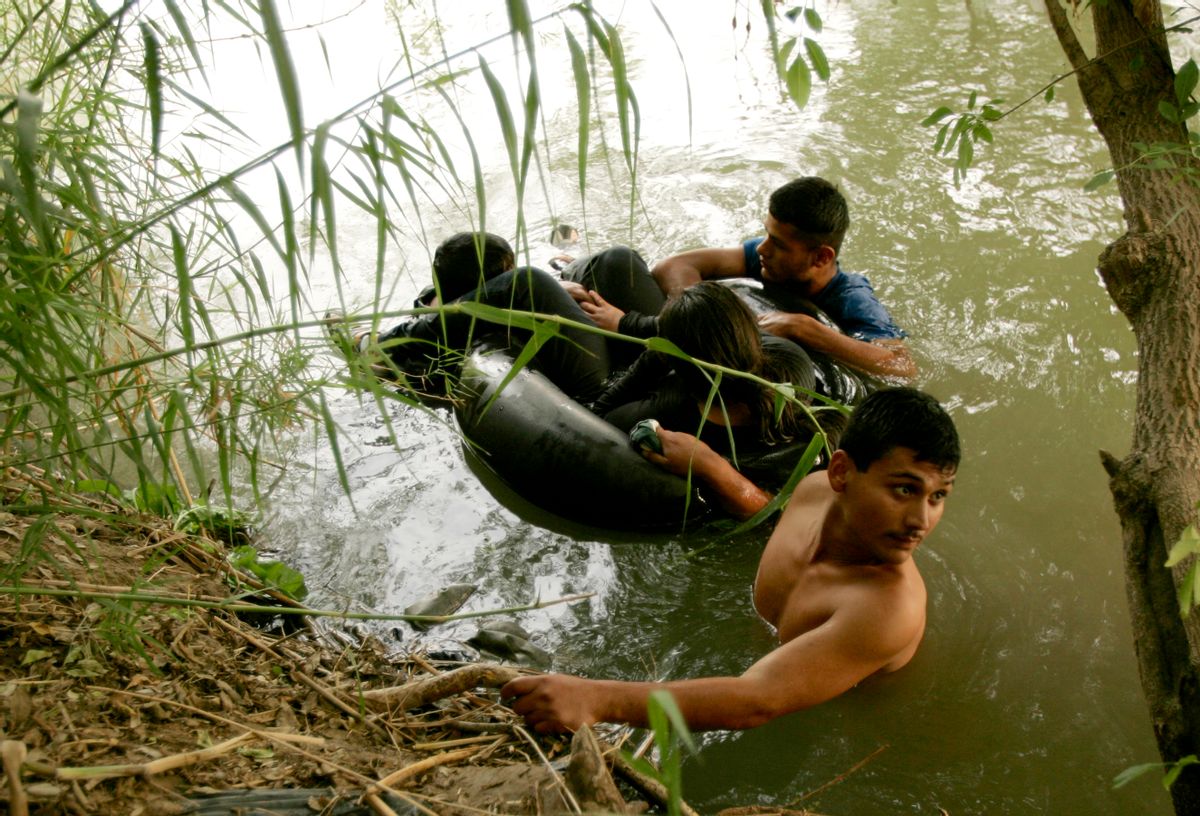 A group of illegal aliens wait on the U.S. side of the Rio Grande river, after floating across in a tire tube, in Laredo, Texas May 2, 2006. U.S. Border Patrol agents intercepted the group and they eventually went back to Mexico. REUTERS/Rick Wilking (Reuters)
--

Momentous news for American workers: The Chinese are eating more nuts than ever, and illegal immigration into the United States from Mexico is on what looks to be a long-term sustainable decline.

First: Mexico. Damien Cave's story in the New York Times on changing trends in Mexican emigration to the United States is a true blockbuster. There are many reasons why illegal immigration into the United States is down sharply -- new punitive laws in American states, the impact of the recession on the construction business, reforms that make it easier for Mexicans to get legitimate visas, demographic changes resulting in smaller Mexican families -- but one crucial factor with enormous implications for the future is the growth and maturation of the Mexican economy.

Over the past 15 years, this country once defined by poverty and beaches has progressed politically and economically in ways rarely acknowledged by Americans debating immigration. Even far from the coasts or the manufacturing sector at the border, democracy is better established, incomes have generally risen and poverty has declined.

Here in Jalisco, a tequila boom that accelerated through the 1990s created new jobs for farmers cutting agave and for engineers at the stills. Other businesses followed. In 2003, when David Fitzgerald, a migration expert at the University of California, San Diego, came to Arandas, he found that the wage disparity with the United States had narrowed...

That gap has recently shrunk again. The recession cut into immigrant earnings in the United States, according to the Pew Hispanic Center, even as wages have risen in Mexico, according to World Bank figures. Jalisco's quality of life has improved in other ways, too. About a decade ago, the cluster of the Orozco ranches on Agua Negra's outskirts received electricity and running water. New census data shows a broad expansion of such services: water and trash collection, once unheard of outside cities, are now available to more than 90 percent of Jalisco's homes. Dirt floors can now be found in only 3 percent of the state's houses, down from 12 percent in 1990.

Educational opportunities in Mexico have also vastly improved. The importance of these changes cannot be overestimated. It doesn't matter how high a wall the United States might ever manage to erect on the Mexican border. As long as the huge disparities in the standards of living available in the two countries remained so immense, the pressure pushing cheaper labor across the border was irresistible. But finally, that pressure is beginning to slack off.

Next up: China. The Financial Times reports that "an appetite for healthier living among the country's fast-growing middle class has stoked demand for nuts, sending prices of cashews and other snacks to record levels."

This is very good news for California's farmers. California produces three-fourths of the world's walnuts and around 80 percent of the world's almonds. Business, largely due to Chinese demand, is booming:

The nutty news offers an encouraging hint as to what a burgeoning Chinese consumer sector could mean for American exports, even if exchanging roasted almonds for iPhones and San Francisco Bay Bridge components might not seem like a fair trade.

But let's put these two stories together.

In the U.S. agricultural production is often crucially dependent on cheap labor -- particularly when there are crops that need picking. That labor is frequently provided by illegal immigrants. Laws that crack down on illegal immigration can cause severe problems for farmers, as Georgia recently learned to its great dismay.

In the immigration domain, there is a fierce, heated ongoing debate over whether the labor shortage problems such as those currently faced by Georgia's farmers can be solved by simply raising agricultural wages, or whether there are real shortages in the workers available who are (a) willing and (b) have the necessary skills to do the job. One thing's for sure -- agricultural production is a low-margin business. If farmers pay higher wages to pickers, Americans will pay higher prices for their food.

But when you combine what is going on in Mexico and China you have to think that the debate over whether legal American citizens are willing or able to pick strawberries is moot. If the supply of cheap labor is in decline while demand for agricultural produce is on the rise -- on a global scale -- then wages must rise for American agricultural workers. There's just no way around it.

I have long been preaching in this blog/column that the best possible news for American workers is a thriving global economy. Even if, in some cases, the rise of China or India or Brazil or Mexico has been predicated on those countries exploiting their own cheap labor at the expense of the American worker, in the long run, the emergence of strong middle classes in those nations is a very, very positive sign.

The question has always been: How fast could this global transformation happen? Mexico's example suggests it can happen pretty quickly.