Did Obama kill the confidence fairy?

Employers aren't hiring, says the GOP, because big deficits breed "uncertainty." But who is to blame for that? 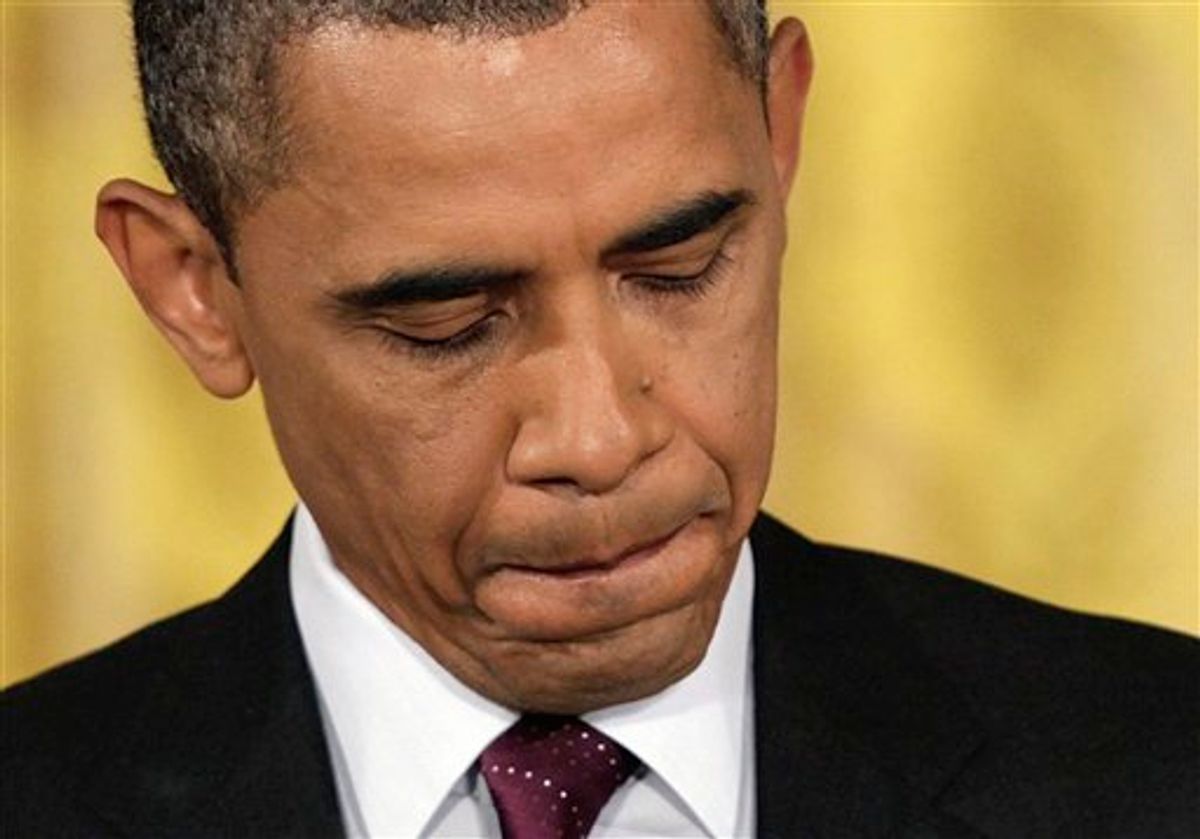 President Barack Obama pauses before answering a question during a news conference in the East Room of the White House in Washington, Wednesday, June 29, 2011. (AP Photo/Carolyn Kaster) (AP)
--

Or at least, that's the line of argument suggested by some of Salon's readers today.

"You may want to address the biggest issues affecting American companies motivation for re-investing their profits in America," wrote one reader. "These issues are of course out of control spending by the federal government and ever increasing federal debt. The federal government has created an environment of uncertainty that makes investing for the future very difficult."

So -- just cut the deficit, and along will come the confidence fairy, waving her wand to usher in a magical "expansionary fiscal contraction." A little (or a lot) of austerity, and all will be well.

One almost never hears this theory get much airtime when Republican presidents are busting budget surpluses and running up big deficits. Back when George Bush was cutting taxes, there wasn't a peep from the business community or Republican legislators warning about the dire impact that future deficits would have on business confidence. Quite the opposite -- as Dick Cheney so famously said: "deficits don't matter."

But that's not to say that confidence doesn't play a huge role in economic activity. Indeed, that's what Keynesian "animal spirits" are all about. If people, whether as consumers or entrepreneurs, feel confident enough to take risks and engage in economic activity, their ebullience creates a self-fulfilling virtuous cycle. More demand leads to more economic activity leads to even more willingness to take risk. So yeah, there's no question that the United States could use a little more confidence.

But is it really the deficit that is holding people back right now, instead of the deleterious effects of the worst economic crisis since the Great Depression? What's more likely to dissuade an employer from hiring -- the prospect that taxes might have to rise in the future to bring down government deficits, or the fact that there is no demand for the goods or services his or her company offers? After all, if there was demand, an uncertain future would be highly unlikely to prevent companies from staffing up to meet the demand that exists in the present. We never know what's going to happen in the future -- the most obvious explanation for why businesses aren't hiring is that an economy featuring high unemployment isn't generating enough demand. Fix that problem, and "confidence" will boom.

The even more questionable aspect of the deficit-causes-uncertainty argument is the partisan line that names Obama as the guilty party. Yes, Obama isn't doing what he needs to do to boost employment, but if you want to talk about politicians who are guilty of breeding uncertainty then it's just as easy, if not easier, to point the finger at Republicans. Have we forgotten that just last December, Republican legislators overwhelmingly approved a package of tax cut extensions and brand new tax cuts that immediately made the nation's deficit larger? Is there anything that could possibly be more psychologically debilitating to our national sense of self-confidence than the idea that our government might willingly fail to raise the debt ceiling and plunge our nation into utterly uncertain fiscal waters? President Obama has put on the table a budget deal sacrificing so many core Democratic priorities that a large swathe of his own party feels betrayed -- and Republicans still won't agree to it. That, surely, is something that many Americans find quite nerve-racking.

The quickest way to close a deficit is to combine revenue increases with spending cuts. But revenue increases are verboten because the real goal of the modern Republican Party is not to cut deficits, but to strangle big government. So the argument shifts: It's not really deficits that are causing the lack of confidence -- it's the prospect of tax increases in the future.

The longer you look at this argument the nuttier it gets. As a percentage of GDP, federal taxes are lower now than they've been in 60 years. As percentage of personal income, federal, state and local taxes combined are also at a 60-year-low. Businesses should be shouting hallelujah, investing their money right and left with abandon, and going on wild hiring sprees because this is as good as it is going to get. Republican success at bringing taxes down so low has guaranteed that taxes must rise in the future. There's nothing uncertain about that.

Because here's the kicker. If the goal is to balance the budget without ever raising taxes again, then what we face is the challenge of cutting the size of the federal government by about 40 percent at the same time that the economy is struggling to stay afloat. We're talking about cutting Medicare, Medicaid, Social Security, food stamp programs and unemployment compensation. We are talking about ensuring that millions of Americans are more vulnerable to downturns in the economy, less able to pay for their health care, and completely unprepared for retirement. We're talking about vacuuming demand out of the economy at just the point that we need it most.

This is supposed to boost confidence?