In which we play phone-a-poet

Heather Christle will read her work to anyone who calls. We found out what happens if you pick up the phone 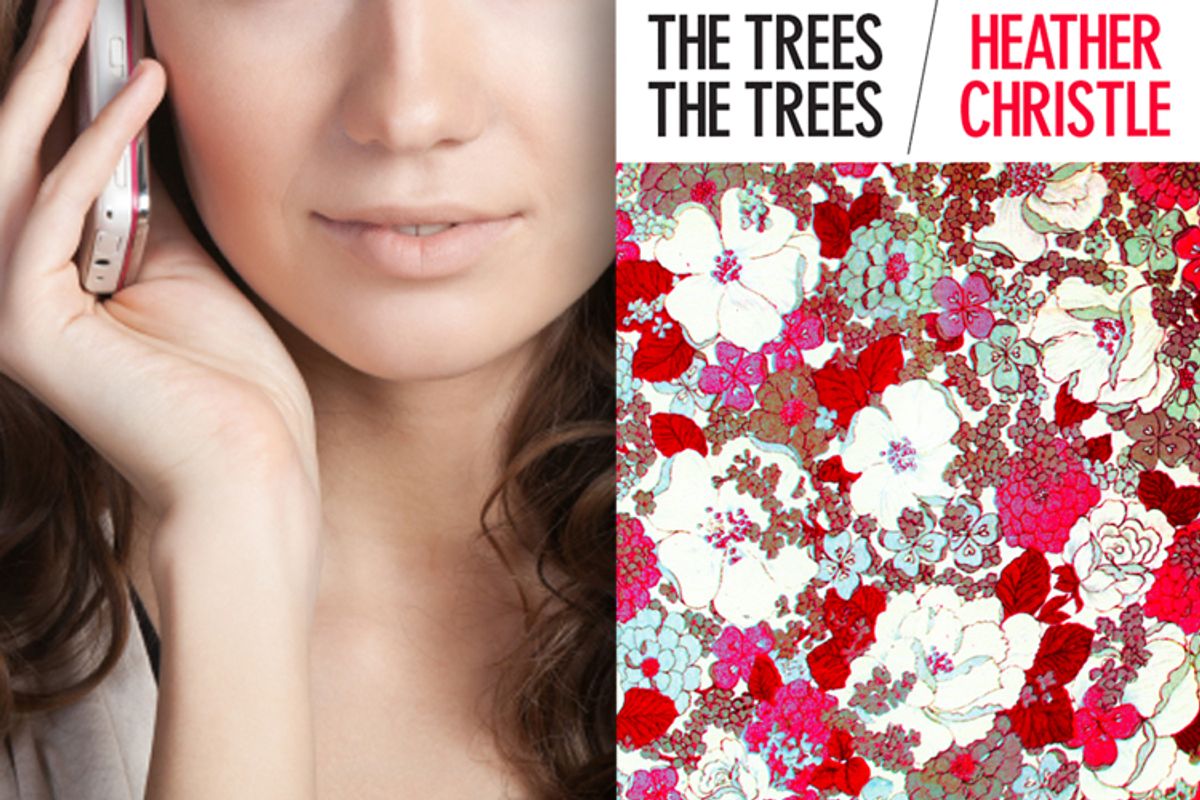 Heather Christle is a creative writing fellow in poetry at Emory University whose second volume of poetry, "The Trees the Trees," is out now (her third book will be published by Wesleyan University Press). If you like her poems, you can call her during appointed (but generous) hours between now and next Thursday, and she'll read one just for you. It's as easy as dialing 413-570-3077.

The project has understandably received attention since it was announced. Christle has already explained some of the background to the Guardian; I called her around lunchtime today for a live poetry experience of my own. Here's a transcript of our conversation, with minor edits for the sake of fluency:

Heather Christle: Hello, this is Heather.

Emma Mustich: Hi, Heather. My name's Emma, and I'm a culture blogger at Salon.com. I wondered if you might be willing to read me a poem -- and chat for a little while about your project.

HC: Yeah, I'd love to. That sounds great!

EM: Well, if it's all right, the poem I'd like to hear is "Parallelograph."

HC: Sure, that sounds good. Let me just find "Parallelograph" in the table of contents. It's funny, I ought to know the numbers really well by now, but it's all become kind of a blur I think.

HC: Let's see ... Actually, I've stopped counting, because it just became too much to keep track of. I don't know, maybe a dozen so far. It's funny -- at first, it was mostly just individuals calling, and since it's been getting picked it's been much more people calling from newspapers and radio shows and things.

EM: Do you do all this from an office? Or do you just pick up the phone wherever you are?

HC: Wherever I am. I'm mostly at home -- right now I am. I teach at Emory, but I'm just teaching one class for the summer session. I have read some poems in the grocery store, and I just read one outside while I was playing with my neighbor's cat. I'm about to go to the hardware store, so I'm hoping I might get to read someone a poem while I'm standing next to hammers. [Laughs.] So should I go ahead and read this poem?

HC: You're welcome. Someone else was calling -- I wasn't sure if you were hearing beeps on your end.

HC: OK. I'm never sure if people can hear those beeps or not.

EM: Do you get self-conscious at all, doing this all day?

HC: Not really, no. I thought that I might before it started, but it's felt very comfortable the whole time.

EM: Would you ever do this face-to-face with people? Or is it the phone in particular that interests you?

HC: Oh, interesting. I mean, I do readings in person -- that's part of my life as a poet -- but I suppose it is a little different with the one on one. I'm not sure whether I'd do one-on-one readings, face to face. Although there is a group that does that, actually, The Poetry Brothel. But that's not really my style so much.

I think the phone is actually especially important to me because these poems imagine these phone calls happening so much, and this possibility that the reader might answer somehow -- well, like in that poem I just read, in "Parallelograph," the poor speaker is feeling really sad that nobody's calling.

I didn't have this project in mind when I wrote the poems, but after writing them, I realized how especially poignant it might be to make that action actually occur in the real world.

EM: Yes -- I was going to ask whether you had this project in mind as you were writing.

HC: No, not at all. It just kind of happened as I was putting the book together, once the poems were all written.

EM: What kind of phone are you using? Is it a cellphone?

HC: Yes, I'm on a cellphone. But I didn't want to publish my actual phone number, so I set up a Google voice number, so it just gets forwarded to my cellphone. And it means that I can turn it off for the hours when I'm not doing this.

HC: It's funny -- people tend to call in clusters for some reason. Definitely as soon as I get in the shower somebody calls.

EM: My last question: Who's the most surprising caller that you've had?

HC: Probably Julian Marshall from the BBC. That completely flabbergasted me.

EM: They didn't warn you before he called?

HC: They warned me -- I knew that they were going to have someone from 'Newshour' calling, but I didn't know it was going to be actually Julian Marshall. He's someone whose voice I'm very used to coming out of the radio or my computer, but to suddenly hear his voice coming out of the phone was quite something. [Laughs.]

EM: I know you have another caller on the line, so I won't ask any more questions. But thanks so much for the poem, and for chatting!

HC: Oh, thanks for being interested, and for listening to the poem. Take care!