Syrian crackdown on town may be war crime

By Elizabeth A. Kennedy - Bassem Mroue 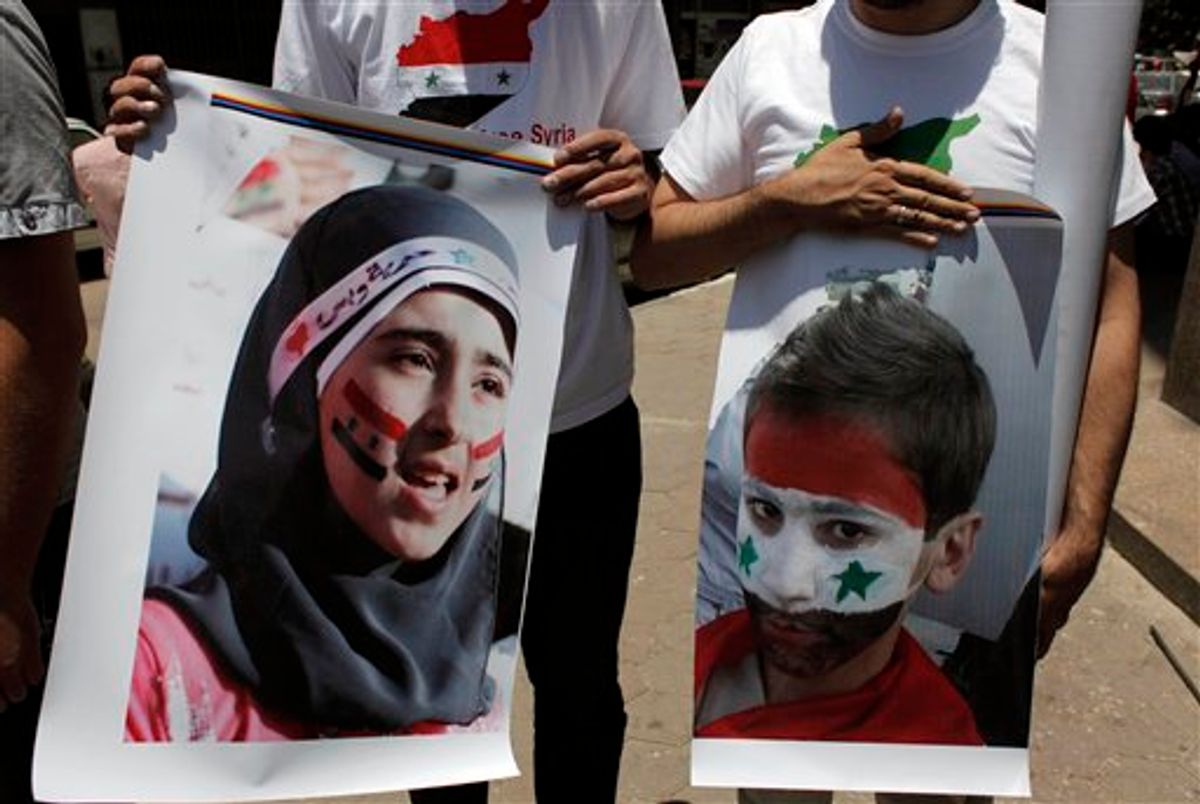 Two protesters carry posters with pictures of unidentified relatives in Syria, with the Syrian flag colors painted on their faces during an anti-Syrian regime rally near the Syrian embassy in Cairo, Egypt Tuesday, July 5, 2011. Syrian troops fired Tuesday on residents who set up makeshift roadblocks to prevent the advance of tanks ringing the city of Hama, which has become a flashpoint of the uprising against autocratic President Bashar Assad, activists said. (AP Photo/Nasser Nasser) (AP)
--

The rights group Amnesty International said Wednesday that Syrian security forces may have committed war crimes during a deadly siege of an opposition town in May, citing witness accounts of deaths in custody, torture and arbitrary detention.

The Amnesty report focused on a crackdown in Talkalakh, a town near the Lebanese border that was overrun by army tank units, security forces and pro-regime gunmen after weeks of protests calling for the ouster of President Bashar Assad. Some activists place the Talkalakh death toll as high as 36. Thousands of people also fled to Lebanon to escape the offensive.

The report by the London-based group could boost international pressure on Assad's regime as it presses attacks on various fronts against a four-month-old uprising, including sending more forces this week against a string of towns along the Turkish border seen as potential anti-government strongholds.

Amnesty called on the U.N. Security Council to refer the case to the International Criminal Court.

At the time of May attacks, residents told The Associated Press of scenes in the town of about 70,000, including execution-style slayings and the stench of decomposing bodies in the streets. Talkalakh is surrounded by villages filled with Assad loyalists from his Alawite sect.

Amnesty quoted witnesses as saying Syrian forces fired on fleeing families and ambulances. One witness said soldiers stabbed lit cigarettes on the backs of detainees' necks. The Amnesty report said at least nine people died in custody, including eight who were fatally wounded after they were ordered out of a house.

According to Amnesty, some of the family members who went to identify the bodies of their sons in Talkalakh were forced to sign a document stating that the boys and men were killed by armed gangs.

Amnesty cited interviews carried out in Lebanon and by phone with more than 50 people. The rights group, along with most foreign media, has not been allowed to enter Syria.

The report said the attacks "appear to be part of a widespread, as well as systematic, attack against the civilian population," which would constitute crimes against humanity.

"Most of the crimes described in this report would fall within the jurisdiction of the International Criminal Court," Luther said. "But the U.N. Security Council must first refer the situation in Syria to the court's prosecutor."

Four European countries have introduced a draft resolution in the Security Council that would condemn Syria's crackdown on protesters, but Russia and China have indicated they would veto it.

In May, Reed Brody, counsel for the New York-based group Human Rights Watch, told AP Television News that the Talkalakh attacks appear to be "a systematic attack on a civilian population, a political decision to shoot to kill unarmed demonstrators and that could very well be a crime against humanity."

Activists say security forces have killed more than 1,400 people -- most of them unarmed protesters -- since mid-March. The regime disputes the toll, blaming "armed thugs" and foreign conspirators for the unrest.

Assad's forces have opened up fronts around the country against growing opposition protests, including more than 300,000 demonstrators filling the central city of Hama last week. On Tuesday, security forces and gunmen shot dead more than a dozen people as troops advanced on Hama and faced roadblocks of sand and burning tires, activists said.

The London-based Syrian Observatory for Human Rights said 14 people were killed Tuesday in Hama. Another group, the National Organization for Human Rights in Syria said, as many as 22 people were shot dead and more than 80 wounded. The reason for the discrepancy in the death tolls was not immediately clear.

Hama has a history of militancy. In 1982, the late Hafez Assad ordered his troops to crush a rebellion by Sunni fundamentalists, killing between 10,000 and 25,000 people, rights groups say.

On Wednesday, a Hama resident said Syrian troops were beefing up their presence on the city's outskirts. Inside Hama, many shops were closed as part of a self-declared general strike since Friday.

The resident, who spoke on condition of anonymity for fear of government reprisals, said the strike would continue "until all detainees are freed" following a wave of arrests in the past days.

In northern Syria, troops entered villages near the Turkish border that pro-government forces fear could become bases for opposition groups, the Syrian Observatory for Human Rights said. The group, quoting witnesses in the area, said intense cracks of gunfire were heard in the area but it was not clear if there were any casualties.

Near the capital Damascus, security forces detained dozens of men in the town of Dumair on Wednesday, said a Syria-based activist. The activist, who requested anonymity in fear of reprisals, said the detainees were being held at a boys' school on the edge of town, about 20 miles (35 kilometers) east of Damascus.