The final nail in the supply side coffin

Broken recovery: Taxes are low and corporate profits are high, but nothing is trickling down to the American worker 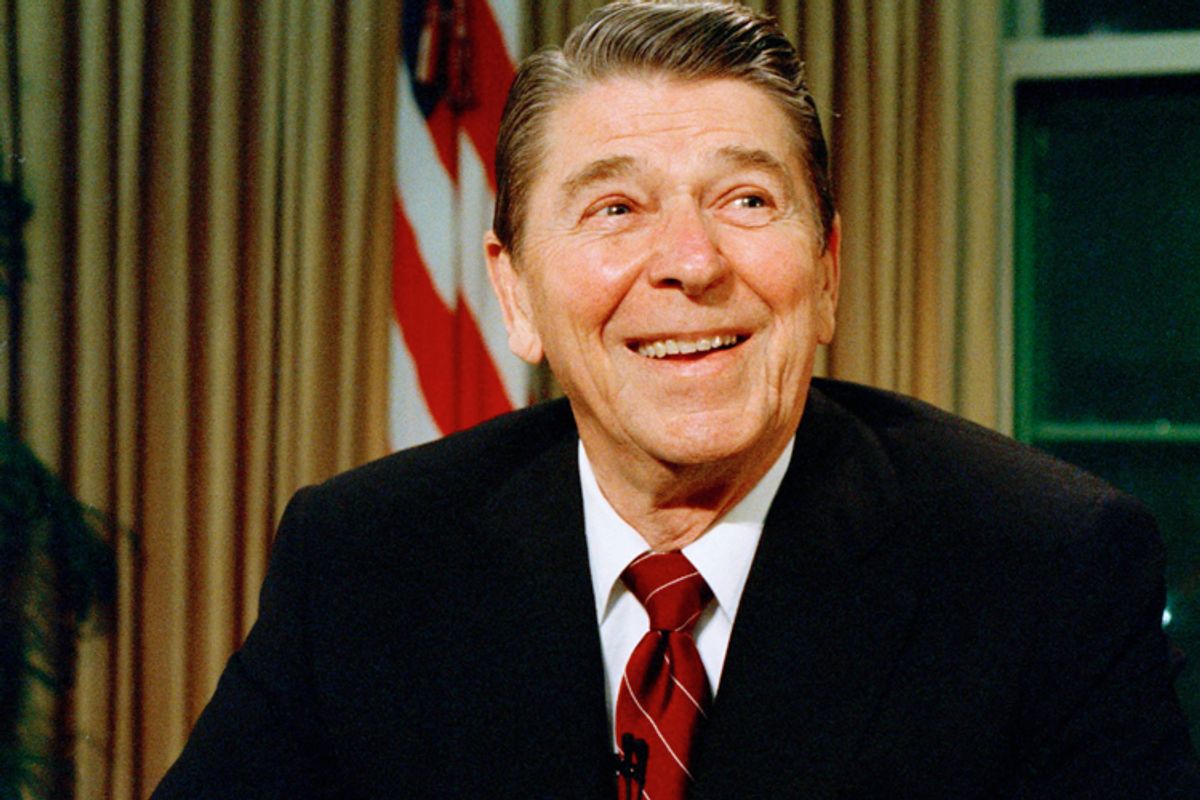 President Ronald Reagan smiles as he poses for photographers after delivering a speech on television, in this Dec. 11, 1987 file photo.
--

The theory of supply-side economics tells us that if you cut taxes on rich people and corporations, the newly liberated moguls and businessmen will take their windfall and invest it, creating jobs and accelerating the rate of economic growth. The benefits of a light hand on the upper class, therefore, will "trickle down" to the working man and woman.

Ever since Ronald Reagan first attempted to make supply-side economics a reality and proceeded to inaugurate an era of persistent government deficits and growing income inequality, it has become harder and harder to make the trickle-down argument with a straight face. But we've never seen anything quite like the disaster that's playing out right now.

The Wall Street Journal reported on Tuesday that corporate profits are looking quite strong for the second quarter of 2011. Even the Journal can't sugarcoat the basic facts:

While the U.S. economy staggers through one of its slowest recoveries since the Great Depression, American companies are poised to report strong earnings for the second quarter -- exposing a dichotomy between corporate performance and the overall health of the economy.

But that's just the tip of the nightmare. A newly released study from the Center of Labor Market Studies at Northeastern University, "The 'Jobless and Wageless' Recovery From the Great Recession of 2007- 2009," lays out some extraordinary statistics. (Hat tip: The Curious Capitalist.)

In the first quarter of 2011, aggregate U.S. GDP -- the total value of all the goods and services produced in the United States -- was higher than the peak reached before the recession began in 2007. During the six quarters since the recession technically ended in the second quarter of 2009, real national income in the U.S. increased by $528 billion. But the vast majority of that income was captured as profit by corporations that failed to pass on their happy fortunes to their workers.

What makes this "recovery" so different? Perhaps the simplest answer is that labor has been broken as a force that can put pressure on management, so there's little incentive for employers to turn profits into wage hikes or new jobs. Instead, employers are squeezing more out of the workers that they've got, and investing in equipment upgrades and new technology instead of human assets -- labor productivity has risen sharply since the end of the recession.

Globalization also plays a potent role -- and not just as a source of cheap labor to undermine the bargaining power of American workers. The Journal notes that many companies "are benefiting from demand from emerging markets, where they are deriving an increasing share of their sales." Job creation is probably following the sources of new demand. If the Chinese and Brazilians and Indians are the ones buying American goods and services, then it makes sense to staff up overseas. But with American consumers still shellshocked by the economic crash and dutifully obsessed with paying down their debts while trying to hold on to their homes, domestic demand is hardly a force to be catered to.

Wages are moribund, unemployment is stuck at 9 percent, and the corporate bottom line is doing just fine. You could be excused for thinking that if ever there was time to put the stake through supply-side economics, it would be now. Wall Street and big corporations are doing just fine, but absolutely nothing is trickling down. And yet Republicans are still pushing the same old song and dance, passionately holding the entire creditworthiness of the United States hostage in return for even lower taxes on corporations, adamantly refusing to countenance even the slightest revenue increase to help cushion the hard times for the Americans who are getting a raw deal out of the current recovery.

Democrats come in for their share of the blame, too. The worst economic recovery for American workers in history has happened on Obama's watch, and he appears remarkably oblivious to it. He may live to regret this oversight.